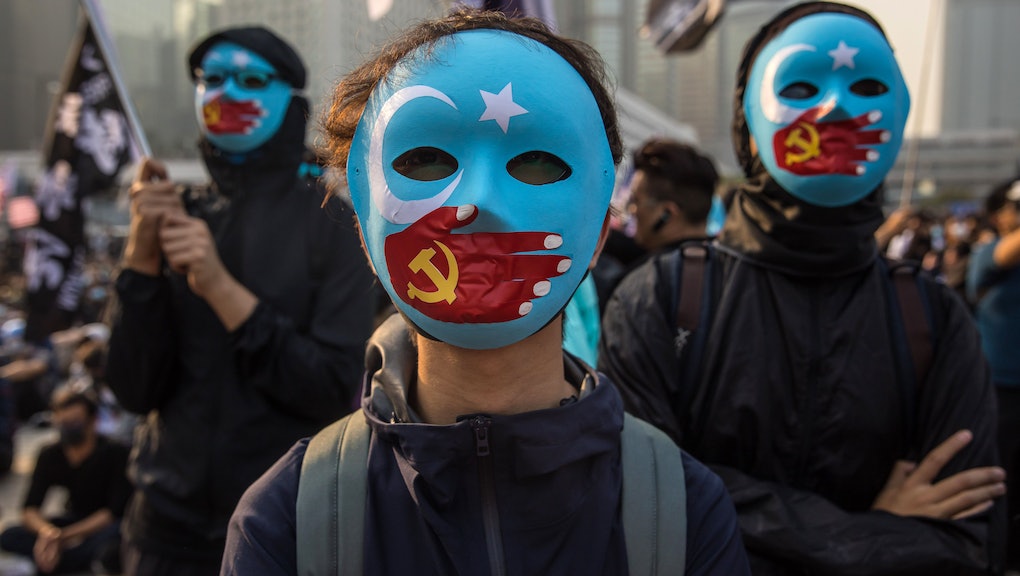 Protesters attend a rally in Hong Kong on December 22, 2019 to show support for the Uighur minority in China. (DALE DE LA REY/AFP/Getty Images)

Disney is facing fresh calls from human rights activists to boycott the live-action remake of Mulan. Parts of the film were shot in Xinjiang, the region in western China where the government is accused of committing egregious human-rights offenses against millions of Uighur Muslims. Disney thanked eight Xinjiang government entities in Mulan’s end credits.

People willing to shell out $30 on top of their Disney+ subscription finally got the chance to watch the long-awaited film on Friday. But eagle-eyed viewers noticed the suspicious detail over the weekend and sounded the alarm on social media. The credits extend a nod to the "publicity department of CPC Xinjiang Uighur Autonomy Region Committee," the wing of the Chinese Communist Party responsible for producing state propaganda in the province. Disney also thanked the police bureau in Turpan, an ancient Silk Road city in Xinjiang, where China is believed to operate more than a dozen extra-judicial “reeducation camps.”

Uighurs are a predominantly Muslim, Turkic-speaking ethnic minority in Xinjiang, and for years, the Chinese government has been internationally scrutinized for its efforts to surveil and repress the population. It’s estimated that more than a million Uighurs and other Turkic minorities have been detained in at least 500 prison camps across Xinjiang since 2016, where they’re reportedly subjected to forced labor and made to learn Mandarin and adopt Han Chinese culture. China has allegedly tried to slash the Uighur birth rate through forced abortions, sterilizations, and child quotas. The government is also accused of harvesting the organs of some Uighurs.

Mulan’s production designer, Grant Major, confirmed his team spent "months in and around the northwest province of Xinjiang,” in an interview published in Architectural Digest last week. The film’s director, Niki Caro, posted a photo of sand dunes in a desert landscape on Instagram in September 2017 with the location tagged as “Asia/Urumqi.” (Urumqi is the capital of Xinjiang.)

This isn’t the first time Mulan has been dogged by controversy. Supporters of the anti-government protests in Hong Kong have been calling for a boycott of the film for months. Last August, lead actor Liu Yifei, who plays Mulan, voiced her support for the city’s police force, who’ve been criticized for their violent crackdown on pro-democracy protesters.

Activists say that anyone who cares about human rights should think twice before renting Mulan and indirectly promoting Disney’s business interests in the Xinjiang region. “This film was undertaken with the assistance of the Chinese police while at the same time these police were committing crimes against the Uighur people in Turpan,” Tahir Imin, a Uighur activist based in Washington, told the New York Times. “Every big company in America needs to think about whether their business is helping the Chinese government oppress the Uighur people.”

More like this
In 'Roadrunner,' Anthony Bourdain shows us the beauty of the mundane
By John Saward
The gay songwriters who secretly ruled the country charts are ready for the spotlight
By Alexa Beyer
The Olympics' 13-year-old skateboarding medalists are cooler than I'll ever be
By Kara Weisenstein
Stay up to date