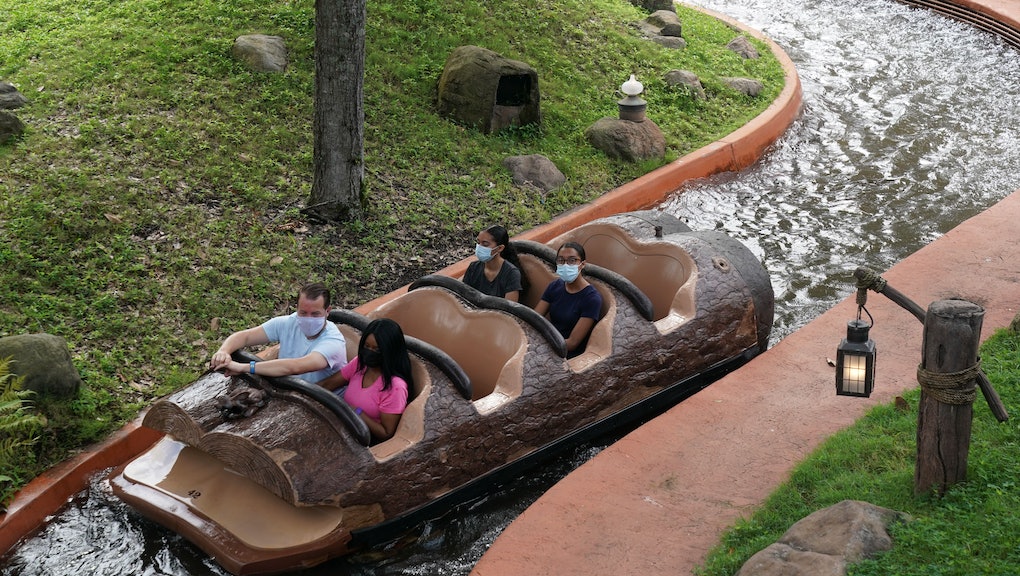 State and federal governments have made the pandemic untenable for service workers in myriad ways, but one of the most enraging is how they’ve been saddled with the burden of enforcing mask policies on uncooperative guests. Disney World, which has strained to preserve a sense of normalcy, adopted a strange new policy to deal with parkgoers who weren’t wearing their masks on rides: digitally editing masks onto maskless guests for their on-ride photos.

Now, after a whole bunch of people pointed out that this is an ineffective or sinister-at-worst way of solving the actual problem at hand — riders violating the park’s mask policy while on the ride — Disney has walked back its policy. A Disney World spokesperson told WDW News Today that the park was only testing out the modifications:

“In response to guest requests, we tested modifying some ride photos. We are no longer doing this and continue to expect guests to wear face coverings except when actively eating or drinking while stationary.”

Post-ride photos have been an odd source of mask enforcement throughout Disney’s reopening. When the parks reopened over the summer, riders who weren’t wearing their masks on the ride — or at least when the photo was captured — wouldn’t receive their PhotoPass pictures.

Last week, WDW News Today reported that this appeared to have been tweaked in some way. One Disney attendee, Tony Townsend, posted a photo from the ride Dinosaur in the Facebook group dubbed “Disney World Junkies.” The photo features one family riding in the front row, and an older couple sitting two rows behind in clearly edited digital face masks. (The woman’s mask is nearly twice as wide as her face, the man’s properly fitted — but neither appear to be connected over their ears.)

It’s an interesting evolution, to see the policy shift from withholding photos to just pretending guests who defy the on-ride mask policy are wearing masks, actually. All told, a guest removing their mask for a high-speed ride is probably safer in practice than one eating at an indoor park restaurant, but there’s never been much consistency or logic to pandemic enforcement. When companies of all sizes are left to their own devices for crafting these sorts of bizarre rules to keep the doors open, there's bound to be some oversight — and digital mask enhancement — along the way.