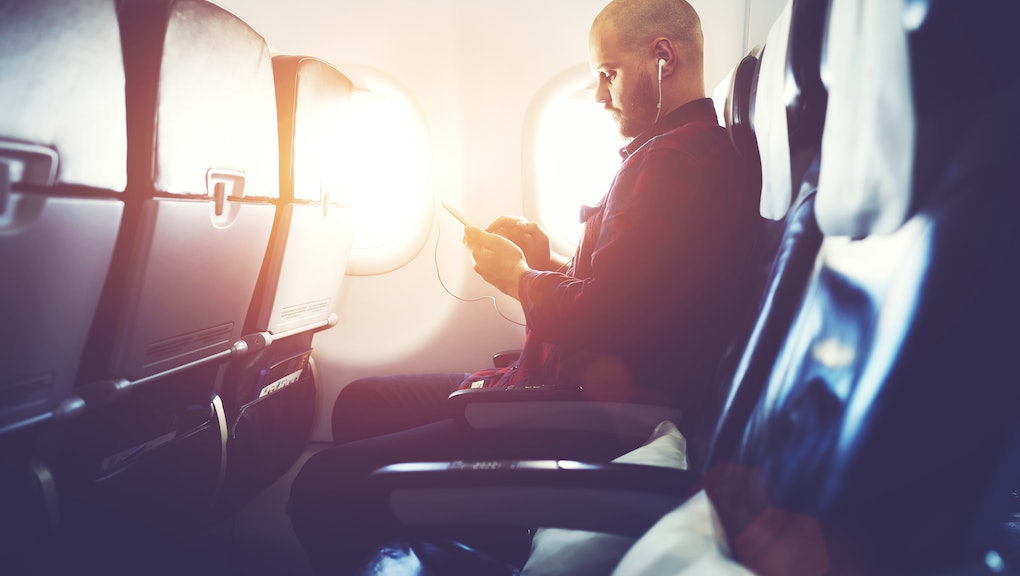 Do airplane rules like turning off your phone during takeoff really matter? Pilots reveal the truth

If you’re a frequent flyer, chances are you’re well acquainted with a long list of rules flight attendants enumerate at the beginning of every trip: Open your window shades, set your plane to airplane mode, put your seat in the upright position, and on, and on, and on. But, let’s be honest: We’ve definitely all been guilty of not actually following those airplane rules because we don’t think they really matter.

But do they? Have we been messing with the airplane's function by texting during takeoff, or is it fine to continue treating these mandates as optional suggestions? Here, pilots share the truth behind each of the below "rules."

Gone are the days of powering down our phones completely while in-flight: In 2013, the FAA released new guidelines, allowing the use of Portable Electronic Devices (PEDs) during all flight stages — as long as they’re in airplane mode. But it’s up to each airline to verify their planes can tolerate any potential radio interference, which has long been a debatable concern when it comes to cell phones and airplanes.

“Can cellular communications really disrupt cockpit equipment? The answer is potentially yes, but in all likelihood no,” Patrick Smith, pilot and author of Cockpit Confidential, tells Mic. “Even if it is not actively engaged with a call, a powered phone dispatches bursts of energy that can, in theory, interfere with a plane’s electronics. Aircraft are designed and shielded with this interference in mind, however, and this should mitigate any ill effects.”

Indeed, according to the FAA, most modern planes can manage potential radio interference signals a rogue cell phone may send — but airplane mode provides an added layer of protection, just in case. “We cannot take the chance...that these would interfere with our navigation or aircraft system electronics, especially in the critical phases of flight during takeoff and landing,” Captain Laura Einsetler, a pilot and author of Remove Before Flight, tells Mic.

Plus, as Business Insider notes, the sheer effort of hundreds of in-flight cell phones attempting to connect to on-the-ground towers can put a major strain on cellular networks. On the ground, your phone connects to one cell tower at a time (the closest one to you), switching to a new one as you move. But, as Travel + Leisure reports, when you’re far from the towers at 10,000 feet in the air traveling at hundreds of miles an hour, your phone connects to multiple towers at once. That congestion can potentially make it more difficult for people on the ground to connect.

Keep in mind that there may be some instances when flight attendants do ask you to turn your phone off completely — according to the FAA, some airplane landing systems may not be able to tolerate cell interference during rare instances of low visibility.

The window shades might be closed when you board the plane (particularly if the crew wants to keep the aircraft cool in a hot climate), but there are a couple reasons the flight attendants direct you to open them before taking off and landing (the two phases of any flight when accidents are most likely to happen, according to Boeing).

“If takeoff is aborted, the flight attendants may...need to check outside the plane for hazards, such as fire or debris, before starting an evacuation,” Captain Tom Bunn, pilot and president of SOAR, Inc, a program that aims to help travelers conquer their fear of flying, tells Mic. “The window shades need to be open to give the flight attendants an immediate, unobstructed view outside the plane.”

The open shades also allow you to see potential hazards as you evacuate — and help ensure you won’t be disoriented when doing so, Smith says. “Dimming the overhead lights is part of the same strategy,” he says. “Burning brightly, the glare would make it impossible to see outside. And by pre-adjusting your eyes, you’re not suddenly blind while dashing for the doors in darkness or smoke.”

Increasingly more airplanes come equipped with power outlets or USB ports, solving one of the most annoying aspects of long travel days — drained phone batteries. But, even if your seat has power, you’ll have to refrain from using it during takeoff and landing.

“In the event of an emergency, [the crew] wants to ensure everybody can get off the aircraft quickly,” Brett Manders, an international airline pilot and author of Behind The Flight Deck Door: Insider Knowledge About Everything You Have Ever Wanted To Ask A Pilot, tells Mic, explaining that, in order to be certified by the Federal Aviation Administration (FAA), an aircraft operator must demonstrate their ability to fully evacuate the plane in 90 seconds or less.

“Imagine you are sitting at the window seat and the two passengers sitting next to you have all manner of devices plugged in.” All of those cords — or even just one of them, for that matter — could cause you to trip or get tangled, and slow down the urgent evacuation.

Rule #4: Put away your computer

Part of the safety spiel on every flight includes asking passengers to stow their large electronic devices. Basically, anything bigger than a phone or a small tablet, is off-limits until you’re at cruising altitude. Sure, it may seem annoying to sacrifice precious computer productivity time during takeoff — but that’s nothing compared to the damage your laptop could inflict.

“Larger electronic devices, like laptop computers, have to be stowed during takeoff and landing to prevent them from becoming high-speed projectiles during a sudden deceleration or impact,” Smith says. Plus, he notes, they can hinder an evacuation if they end up on the floor. “Your computer is a piece of luggage, and luggage needs to be stowed so it doesn’t injure somebody or get in the way,” he says.

And it’s not just your computer. Other seemingly small items — like a water bottle — can pose major risks if they’re suddenly flying through the cabin. “Anything heavy enough to injure a passenger needs to be secured,” Bunn says.

Rule #5: Put your seat and tray table in upright positions

No matter how slightly your seat is reclined, there’s no hiding it from eagle-eyed flight attendants who diligently go down the aisle before landing, making sure every single passenger is sitting completely upright. And there’s good reason for that — as well as the instruction to put your tray table in its upright position. Not only can a horizontal tray table cause real injury if your body slams into it during an emergency or sudden shift, but both the table and seat can also impede that 90-second evacuation.

“In an emergency evacuation, seconds can mean the difference between life or death; and having to wriggle past tray tables would waste time,” Smith says. The same goes for reclined seats that minimize the amount of space people have to move through each row.

And if you think these minor things can’t possibly cause that much of a hassle, it’s important to consider the circumstances of an emergency. “It seems quite easy [to evacuate quickly] in daylight, when everybody is calm and going about their business,” Manders says. “If the aircraft is not the right way up and it is dark — or the aircraft starts to fill with smoke, fire, or water — you need to ensure access is unimpeded.”

Rule #6: Clear the exit row and bulkhead floor of any belongings

On most planes, every passenger — except those sitting in the front row of a cabin, known as the bulkhead — has space under the seat in front of them to store a “personal item,” like a backpack or small weekender bag. But if you’re sitting in the oft-coveted exit row, you might have to sacrifice that storage — at least during takeoff and landing. Some airlines ask exit row passengers to stow all belongings in the overhead bin, something Bunn says is likely due to the risk of those belongings not staying put in the event of a crash.

And, again, that comes down to getting passengers off the plane and to safety as quickly as possible. “It is critical things are stowed or clear of [the exit row] because 50 to 100 people will need to escape through this exit within 90 seconds,” Einsetler says.

The bottom line? While you may be tempted the ignore seemingly arbitrary airplane rules in favor of your own in-flight comfort, it’s best to take heed. Even if you’re not aware of the reason, chances are it’s a good one. Sure, plane crashes are extremely rare; but in the off-chance something does go awry, it’s important to know what to do. In fact, Manders suggests tuning into the safety demonstration, even if you don’t think you need to.

“You might be a regular flyer,” he says. But, “if the lights went out and you couldn’t see, could you: undo your seatbelt, find your life jacket, put it on and get to the second-nearest exit in the dark? It would pay to do a little bit of a worst case scenario. You could save lives by doing this.”

More like this
The travel industry still ignores people with disabilities
By Brian Garrod
How to not be a jerk on the plane, according to flight attendants
By Melissa Pandika
Is your cat mad or is that just their face? This app can help you find out
By Tracey Anne Duncan
Stay up to date