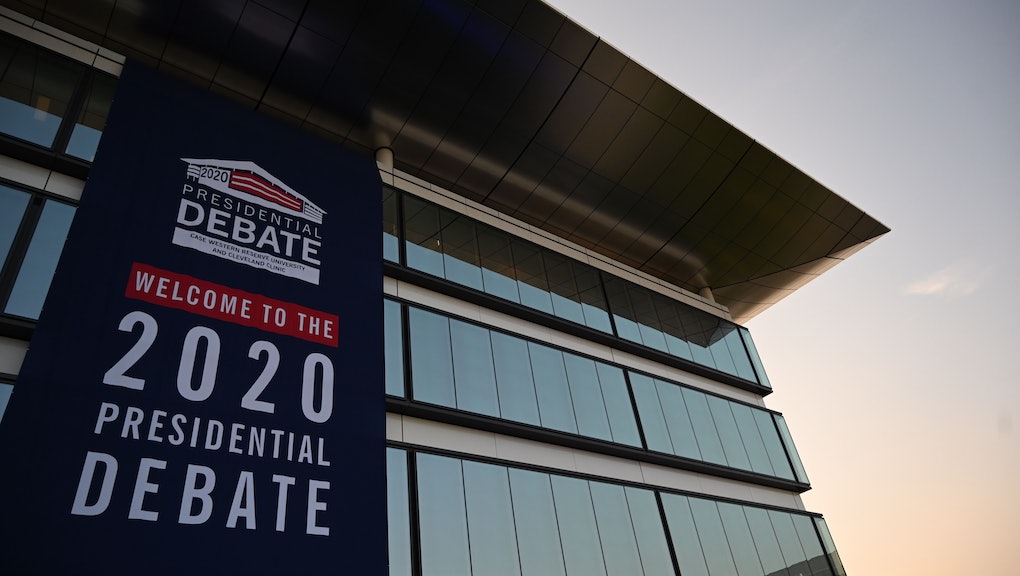 Do presidential debates even matter?

It’s difficult to imagine that anyone from any portion of the political spectrum might watch Tuesday’s presidential debate and actually change their mind about how they plan to cast their ballot in November. The vast majority of voters have known for some time how they’ll vote in the coming weeks, and the upcoming presidential debates — scheduled for Tuesday, Sept. 29; Thursday, Oct. 15; and Thursday, Oct. 22 — don’t appear positioned to change that.

Much of the debates’ inability to function as anything more than political entertainment (however masochistic) can be attributed to how uniquely many Americans have experienced this year’s campaign. American politics has been described as “polarizing” plenty of times before, but framing this election year as a crisis of democracy makes voting less about debating ideas or learning about policy platforms and more about crisis prevention. How does a potential voter put any value on a political debate where one candidate has a steady track record of lying in front of cameras or changing his mind by the hour, and the other candidate treats the vast majority of his voter base’s concerns as negligible because — well, you know, at least he isn’t his opponent, who has a history of spewing plainly racist vitriol?

Interestingly enough, most of the unexpected challenges Americans have faced this year have clear and direct connections to some of the biggest political issues of the moment. One might even suggest that progressive policy proposals and radical ideas have, in fact, made a pretty convincing case for themselves over the course of 2020. Amid the pandemic’s sweep across the country, Medicare-for-All seemed like an obvious solution to fast-rising health care costs and the lack of adequate health care coverage for millions of Americans. Similarly, the push to make housing a human right only became more relevant as homeless communities struggled to maintain safety measures during the pandemic and the possibility of eviction grew progressively more realistic as employment numbers turned sharply upwards. Climate change is also becoming progressively more critical as the real impacts of today’s unpredictable weather patterns threaten homes and lives around the world.

But most voters already know each candidate’s position on the issues that mean the most to them. Barring the announcement of a late-stage change in their policy platform, what could either Joe Biden or Donald Trump say tonight that would surprise the average viewer? Can we possibly learn anything new about either candidate, particularly if the president continues to thrive on a degree of dishonesty while still somehow eliding any real accountability? And if Biden refuses to budge on big issues out of an assumption that he doesn’t have to really appease the more vulnerable portions of his base in order to secure the election, then we’re not primed to learn much at all.

A recent poll from Politico/Morning Consult conducted before the debates echoes the same sentiment. According to their survey, 86% of voters say they’ve already decided who they’re going to vote for in November. An impressive 93% of Biden voters and 98% of Trump voters say they’ve already made up their minds to select their preferred candidate. And only 21% of polled voters said the debate will have an impact on their vote. Similarly, a recent Wall Street Journal/NBC News poll showed that only 29% of voters said the upcoming debates would be “extremely” or “quite” important to their final decision. And nearly half of those polled (44%) say the debates won’t impact their voting decision at all — the highest portion recorded in the poll since 2000.

In comparison, back in 2008 (when we had a completely different contextual understanding of the word “polarizing”), a Pew Research Center poll showed nearly the exact opposite. In that survey, 67% of voters said debates were somewhat or very helpful in deciding which candidate to vote for, and 70% of voters reported that they found them informative.

And yet, 71% of voters polled this year say they’ll still watch at least some of the 2020 debates. The theater and spectacle of the political stage has become a signature pillar of Capitol Hill politics over the past four years, and this stage of the campaign season is no different.

It’s obvious that the presidential election is competing for Americans' attention.

At least part of the challenge with this year’s debates might also just be the sheer number of other major events people have had to manage in 2020. With the still-ongoing global pandemic that has now claimed more than 200,000 lives in the United States, along with the wave of protests around the country in response to the police killings of George Floyd in Minneapolis, Minnesota, Breonna Taylor in Louisville, Kentucky, and several other Black Americans, people in the U.S. have been juggling a wide range of crises over the past nine months; there are also the recent wildfires coloring the skyline over the West Coast, record levels of unemployment, and the recurring threat of eviction for countless families.

Of course, the debates do present an opportunity for already decided voters to double down on their choice or catch sound bites that reaffirm what they already believe. With the choices set in stone, it’s not likely Democrats will force Biden to spend time reckoning with the popular but politically thornier progressive issues he’s been reluctant to embrace. And most likely, a win for Biden in November will include plenty of voters more concerned with voting against Donald Trump than voting for Joe Biden.

Still, tonight’s debate might push a begrudging Biden voter to vote a little less begrudgingly, if the Democratic nominee says something particularly inspiring — or if Trump goes spectacularly off the rails. And it might push the enthusiastic Trump voter to feel even more validated in their own sense of vindication. For everyone, though, the debate really could be a chance to see both candidates verbalize their policy ideas and actually engage with each other.

Or it might be the exact brand of morbid, fatalistic political comedy that, bizarrely enough, seems to be the norm this year.