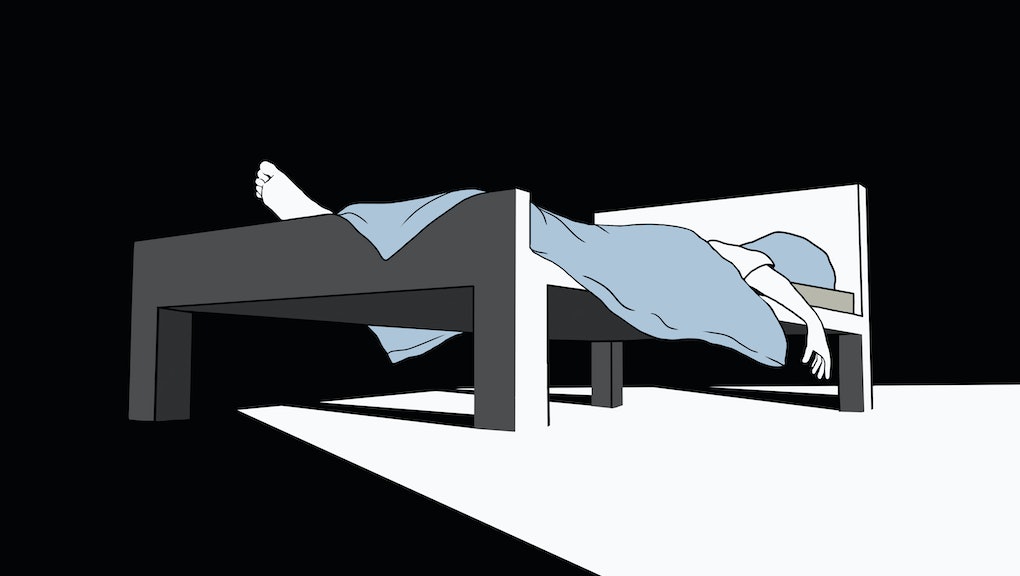 I have generalized anxiety disorder, which means I live with the constant background hum of anxiety and it pervades nearly all facets of my life, including, and especially, my sleep. Most nights, I take at least an hour to doze off, only to awaken three hours later when I find myself, again, struggling to fall asleep. When I recently had the chance to try a weighted anxiety blanket, I was curious yet skeptical; I’ve experimented with so many "natural" sleep hacks (chamomile tea, melatonin, and guided meditation, to name a few), but nothing’s really worked. As it turned out, the weighted blanket did help quell my restless mind, but it wasn’t a cure-all for my sleep problems.

First, some background on this trendy wellness product. Just asking someone whether they've tried proves how polarizing it can be: People either claim it as some type of savior, or they feel like they wasted money on a heavy piece of fabric.

As its name suggests, a weighted blanket has pellets or beads sewn inside of it, so that it ends up pressing around 10 to 30 pounds of weight onto your body, according to SELF. The Plagoods weighted blanket I tried — which was sent to me free to try, but costs around $129 — was filled with recycled glass beads, which brought its weight to 20 pounds. I should mention that this particular blanket is made through eco-conscious practices (a lot of them are not, and may sit in a landfill for longer).

Historically, weighted blankets have been used as a clinical intervention for people with autism, who tend to overreact to sensory stimuli, says Randi J. Hagerman, medical director of the UC Davis MIND Institute. For these individuals, “heavy touch seems to work better,” she explains. “It seems to have a calming effect,” although she notes that most evidence for this comes from clinical anecdotes.

Deep touch pressure — the sensation you get from a hug or squeeze, for example — reduces anxiety by increasing activity of the parasympathetic nervous system, associated with relaxation, rest, and digestion.

In recent years, though, the use of weighted blankets has broadened beyond autism, with brands now marketing them as a way to help alleviate anxiety and promote sleep. For instance, the Plagoods blanket purportedly “helps develop peace of mind and increases relaxation” and would enable me to “fall asleep faster, longer, and wake up feeling refreshed,” per the company’s website.

The problem is, currently, there’s little evidence that weighted blankets help with anxiety or insomnia, Julie Kolzet, a New York City-based psychologist and sleep specialist tells Mic. The few studies that researchers have conducted included only modest numbers of participants, and relied on people’s own reports of how they felt after wearing a weighted blanket, which may not necessarily be reliable. In the case of one such study, whose participants reported feeling refreshed upon awakening, the funding came from the company that manufactured the weighted blankets they used, as SELF reports, which could have created bias in the findings.

Kolzet notes that a 2013 study may offer a glimpse into how weighted blankets potentially soothe anxiety. The findings suggest that deep touch pressure — the sensation you get from a hug or squeeze, for example — reduces anxiety by increasing activity of the parasympathetic nervous system, associated with relaxation, rest, and digestion.

The Plagoods weighted blanket did seem to have a calming effect. The weight literally stilled my body, which, in turn, stilled my mind; this makes sense, since the psychological and physiological symptoms of my anxiety are so intertwined. Another plus: The fabric retained its coolness, so I never felt overheated, which can be a side effect of other weighted blankets.

The weighted blanket made me feel more chill overall — but not enough to make me fall asleep right away, or stay asleep. During the three nights that I used it, I took at least an hour to fall asleep and woke up three or so hours later, per usual. I was also still taking my anti-anxiety medication.

Indeed, assuming weighted blankets do help with anxiety, they’re seen more as a complement to medication, therapy, and other interventions, according to Kolzet. “If someone has been struggling for a long time [with anxiety], most days and most nights, most likely a weighted blanket isn’t going to be enough,” she says. The same applies if you have sleep problems. In fact, a weighted blanket might worsen chronic insomnia. “It can promote a dependency on the weighted blanket and anticipatory anxiety if it’s not available” (if you’re traveling, for instance).

Also, while the weighted blanket did somewhat soothe my anxiety, it may not do the same for everyone. “There are so many variables that can differentiate individuals and our reactions to both pharmacological and non-pharmacological interventions," Kolzet says. “Some people may feel more comfortable with a weighted blanket. Others might find it to be burdensome.”

For instance, I fall sleep most easily when curled up against a wall, or beneath a low, slanted ceiling, which makes me feel held and secure; the weighted blanket has a similar effect. But my favorite sleeping spots would make my sisters felt trapped. When I told them about the weighted blanket, they worried it would be restraining, even anxiety-provoking.

And while my body remained at a pretty comfortable temperature, but people who don't have one with a cooling mechanism might find end up feeling restless from the heat. "Your body temperature decreases to initiate sleep," Kolzet explains.

I also can’t entirely rule out the placebo effect as an explanation for the weighted blanket’s calming effect on me. In other words, my expectation that it could make me feel less anxious might have influenced my experience of it.

If you don’t have a sleep or anxiety disorder, and you’re curious about weighted blankets, there’s probably no harm in trying one, Kolzet says. But if you do live with these conditions, it won’t solve them on its own, and in the case of chronic insomnia, it might make matters worse. I would probably use a weighted blanket as way to help me settle into reading, watching Netflix, or some other quiet activity during my waking hours, but not as a sleep aid.

This article was originally published on November 25, 2019