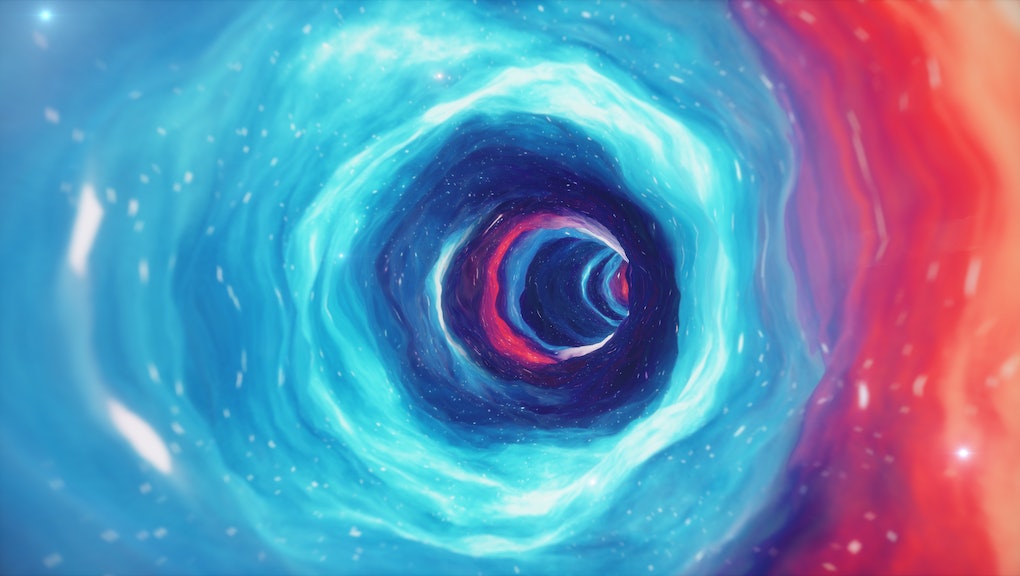 Do wormholes exist? Scientists aren’t sure, but they may know how to spot them

Wormholes are a veritable mainstay when it comes to science fiction. They're the ever-convenient methods of travel so many characters use to get from one place to another in just enough time to avert a crisis. Here's the thing about them, though: scientists aren't 100% certain if wormholes actually exist. What's more, they aren't objects that you'd be able to detect with the naked eye without knowing for the exact phenomena to look for. In a new study discussed in a paper published in Physical Review D, physicists have proposed a new technique that could be utilized in the future for researchers to detect these bizarre celestial objects.

What is a wormhole, even? There's no doubt you've heard the term if you're an avid science fiction reader or movie buff. They're "passageways" between two different regions of space-time. They exist only speculatively (for now), and they're typically visualized as a type of "tunnel" with two ends. In many works of fiction, they're utilized as a method of transportation between two points, often as a way to get from point A to point B in a much shorter amount of time.

Scientists posit that if a wormhole can be found at Sagittarius A*, that would mean the stars around it would likely be influenced by the gravity of the stars pulling on it from the "other end." That means researchers should be able to at least detect a wormhole's presence by looking for anomalies in the way stars are supposed to orbit around Sagittarius A*.

"If you have two stars, one on each side of the wormhole, the star on our side should feel the gravitational influence of the star that's on the other side. The gravitational flux will go through the wormhole," explained Dejan Stojkovic, PhD, cosmologist and professor of physics at the University at Buffalo College of Arts and Sciences. "So if you map the expected orbit of a star around Sagittarius A*, you should see deviations from that orbit if there is a wormhole there with a star on the other side."

Stojkovic also had a dose of harsh reality for science fiction fans: if wormholes do indeed exist and can be detected in the manner his colleagues have proposed, they won't be anything like the ones we've seen in movies and TV shows.

"Even if a wormhole is traversable, people and spaceships most likely aren't going to be passing through," he says. "Realistically, you would need a source of negative energy to keep the wormhole open, and we don't know how to do that. To create a huge wormhole that's stable, you need some magic."

But even if wormholes aren't as distinct (or cool) as fiction makes them seem, scientists are still planning on continuing their research. Stojkovic, for one, is looking to continue tracking data on wormholes and detection techniques over time to glean new advancements that would help scientists figure out, definitively, if they do exist one day. Still, that's a long way off, and even then scientists may be unable to identify one for certain.

"When we reach the precision needed in our observations, we may be able to say that a wormhole is the most likely explanation if we detect perturbations in the orbit of S2," he said. "But we cannot say that, 'Yes, this is definitely a wormhole.' There could be some other explanation, something else on our side perturbing the motion of this star."

Wormholes: Just another addition to the "weird pile" when it comes to the mysteries of deep space.