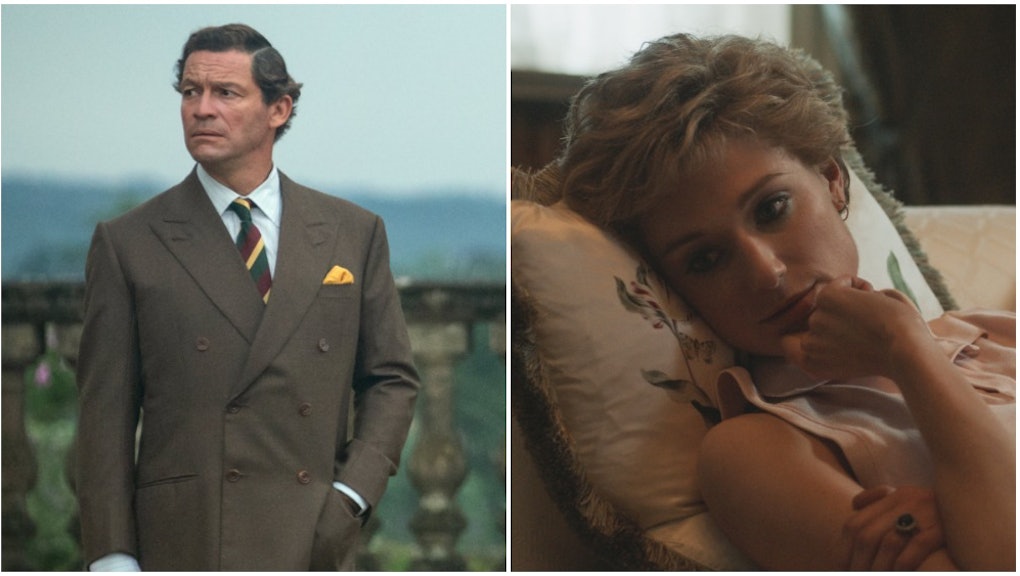 Netflix has released a first look at the new Prince Charles and Princess Diana in the upcoming fifth season of The Crown. The early glimpse has led to a mixed reaction to the casting choices. Some expressed approval at Diana's look, but the resounding response seemed to be that Dominic West, the latest actor to play Charles (he succeeds Josh O’Connor, who played a younger version of the prince in the last two seasons), is perhaps just too hot. Can a chiseled heartthrob like West really play someone who, in life as in the show, is meant to universally invoke feelings of rage and slime-ball recoil?

The Crown has tracked Queen Elizabeth's rule through the second half of the 20th century, swapping out its cast every two seasons as their characters enter new eras. The latest season concerned the deteriorating relationship between Prince Charles and Princess Diana (Emma Corrin). In particular, Charles’s character marked a breakout for O’Connor, who, in his pitch-perfect interpretation of a petulant, mouselike Prince Charles, inspired visceral disgust for the prince’s self-absorption and mistreatment of Diana.

In this new look, though, West seems to cut a distinctly different character. From the early image, he is naturally much older, but is also standing much more firmly erect — the previous Charles seemed to maneuver as if he was always ducking underneath a small door frame, a choice that O’Connor has said signified his being crushed by the weight of the crown — and more overtly menacing. It is perhaps a signal of what’s to come in the new season: an aged Charles perhaps gets only more assured in his cruelty.

In that sense, the casting is by no means a misguided choice. West has had no trouble playing his fair share of morally compromised or even despicable people — from the bad cop McNulty in The Wire, to a rapist in 300, to the cheating husband in The Affair. He will, no doubt, do a fine job in channeling an upsetting aura into Charles in the upcoming season.

But from the physical look itself, his face and build are distractingly mismatched. Outside of the suit and haircut, West bears no resemblance to that of Charles. He looks simply like an older, more rugged Dominic West in a bad wig. Granted, many casting choices for historical figures do fine in ignoring the process of carbon-copying a look with heavy-handed prosthetics and makeup. But in this case, Charles, more than most in the royal family, bears particularly cartoonish features that we’ve come to associate with his disreputable character. Of course, this is only the first image of the new Charles and likely too early to tell exactly how West will exist in the role. But for now: we’d like a little more skeevy, a little less hot, please!

More like this
Lil Nas X's 'baby registry' proves trolling can be done with heart
By Brandon Yu
Steve from 'Blue's Clues' gave us the closure we didn't know we needed
By Kara Weisenstein
The unmatched power of Michael K. Williams
By Bonsu Thompson
Stay up to date