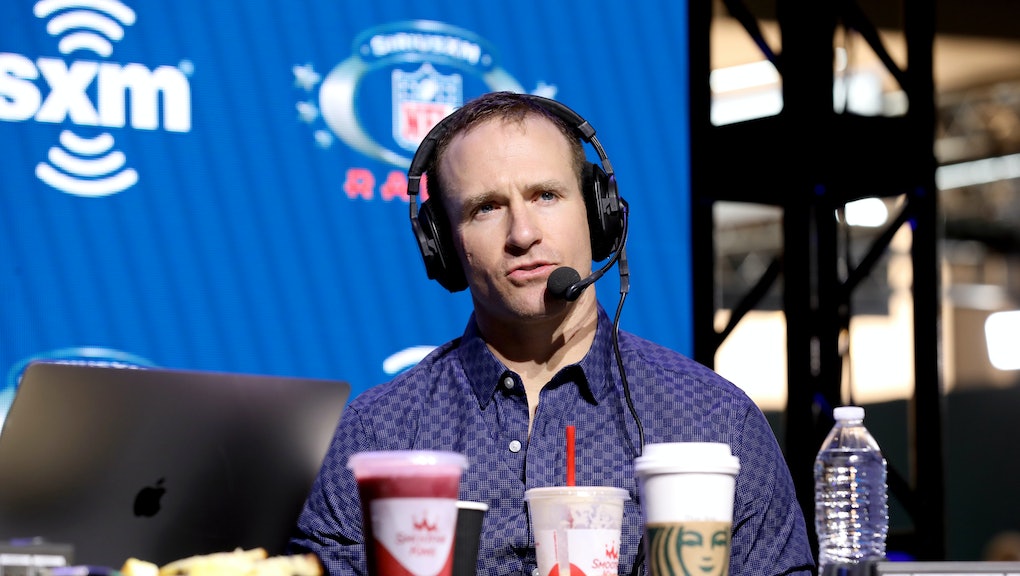 On Thursday, New Orleans Saints quarterback Drew Brees apologized for condemning NFL players who might kneel to protest police brutality during the national anthem this upcoming season. Yesterday, Brees told a reporter that he could “never agree with anybody disrespecting the flag,” and said that “showing respect to the flag with your hand over your heart” works better to promote unity. After being roundly criticized by players throughout the NFL, including some of his own teammates, Brees wrote that his comments were “insensitive and completely missed the mark on the issues we are facing right now as a country” in an Instagram post.

“I stand with the black community in the fight against systemic racial injustice and police brutality and support the creation of real policy change that will make a difference,” Brees writes in the post. “I condemn the years of oppression that have taken place throughout our black communities and still exists today.” Still, near the end of the post, he indicates that his intentions were misunderstood rather than completely misguided. “I am sick about the way my comments were perceived yesterday, but I take full responsibility and accountability,” he writes.

His initial interview was condemned on Wednesday, with sports stars like LeBron James and Aaron Rodgers helping to untangle the anthem protests from disrespecting the flag. Two Saints wide receivers, Michael Thomas and Emmanuel Sanders, even tweeted about Brees’ anthem comments, which is more of a rarity within the league obsessed with empty displays of unity. A “fuck Drew Brees” chant broke out at a New Orleans protest on Wednesday.

As a few people on Twitter have pointed out, the image attached to Brees’ Instagram post comes from the Getty Images stock art website iStock. It appears in the site’s signature collection as $33 without a credit or subscription package, but I was also able to find it under the site’s essentials collection at a slightly poorer quality, ranging from $4 to $12.

Taking this in all at once, it’s hard to see the statement as more than a hollow gesture. The stock art, paired with Brees’ past condemnation of Kaepernick’s kneeling in 2016, and the fact that he doesn’t name Kaepernick or directly acknowledge the current protests in his apology. The stingy PR machine that assembled this Instagram post approaches saying all the right things in the right somber tone, but that it needed to be made at all will be the only takeaway anyone remembers.

This week saw a rise in directives about listening more, talking less, and people who’d previously written off racist police practices now adopting phrases like “systemic racial injustice.” Brees, who’s previously shilled for other more dangerous and retrograde ideas than he probably realized at the time, will always favor calls for unity over acknowledging Colin Kaepernick by name, or ceding credibility to their peaceful protest gesture that’s now being co-opted by police officers nationwide.

Without giving him too much benefit of the doubt, Brees is probably just not the sharpest guy around who gives deference to American iconography above all else. Thomas seemed to vaguely acknowledge as much in his first tweet about Brees yesterday. Silence is in many ways complicity right now, but it can’t hurt if Brees has proven for years that this is the best alternative he has to offer.