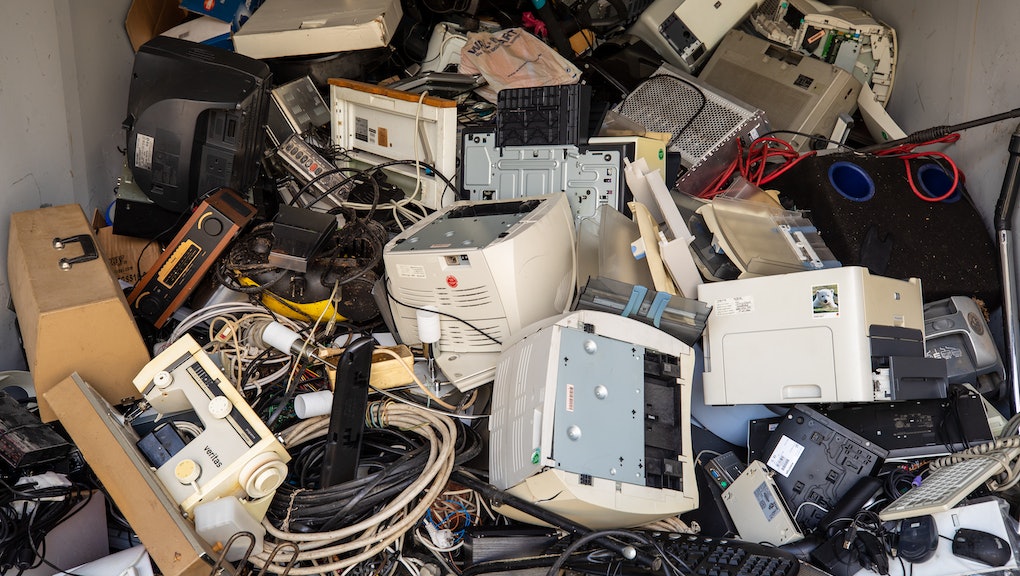 E-waste is a harmful and growing problem. Here's how to recycle your old electronics

There have been any number of events this year that would make anyone want to throw their phone and computer into a dumpster, Ron Swanson style, just so they don't have to deal with it anymore. Unfortunately, we did too much of exactly that in 2019. The result, according to a new report published by the Global E-waste Statistics Partnership, was a record amount of e-waste generated worldwide. Last year, humans canned 53.6 million metric tons of phones, computers, appliances, and other gadgets, most of which won't be recycled properly.

While 2019 saw the most amount of trashed tech ever, it’s also just the latest news in a growing trend. E-waste has been on the rise for half a decade now. According to the report, there has been a 21 percent increase in discarded technology and gadgets since 2014. By 2030, the amount of e-waste is expected to double the level it was in 2014, fueled largely by higher energy consumption rates, shorter device lifecycles, and limited repair options.

Small electronics like cameras, toys, and electric razors made up the biggest share of 2019's trash pile, accounting for 32 percent of all e-waste. Large equipment like kitchen appliances, copy machines, and solar panels accounted for 24 percent. Screens and monitors added seven million metric tons to the total, while IT and telecommunications equipment including phones accounted for five million metric tons of trash.

Some of the increase in e-waste may seem inevitable, given our growing reliance on phones, computers, and other gadgets. What is particularly problematic about the millions of tons of trash that we are amassing, though, is the fact that, according to the report, only about 17 percent of it is actually getting recycled. The rest either gets sent to a landfill, is incinerated, or simply disappears because officials failed to document how it was disposed of.

The inability to recycle much of these goods puts people at risk in a variety of ways. First, there is the simple fact that much of this discarded tech contains mercury, a neurotoxin linked to brain damage, autoimmune disorders, and developmental disabilities like autism. There was more than 50 tons of mercury in the waste that went unaccounted for in 2019 alone. Then there's the sheer amount of gold and other minerals that are lost in the trash when people ditch their old electronics. Researchers estimate that there was about $57 billion worth of gold, copper, iron, and other materials to be found in 2019's e-waste haul. By properly recycling that tech, those materials could be saved and re-purposed. That would require less mining for new rare minerals, which often put people in developing countries, including children, in dangerous and potentially deadly work environments.

How to dispose of e-waste

The best way to ensure that your old electronics are not contributing to the e-waste problem is by properly recycling them — a task that can be easier said than done. You can’t simply toss your old computer in the recycling bin and be done with it. Not every state has a law that requires electronics to be recycled, and every municipality has its own method for dealing with discarded electronics. But there are some general rules to follow that will typically ensure that e-waste ends up where it is supposed to and not in a landfill.

Check with the manufacturer

When getting rid of a piece of tech, check with the manufacturer first to see if they have a recycling program. The Environmental Protection Agency has a long list of tech companies that offer some form of a recycling program, and you can search by brand or by device type. Companies like Apple and Sprint have recycling programs that offer credits in exchange for your old tech. Amazon and Best Buy will take on your outdated electronics, even if you didn't buy from them.

Consider donating rather than discarding when possible, as well. If your gadget still works or is in good enough shape, it can potentially be refurbished or put to good use in other ways. Goodwill works in coordination with Dell to collect old computers and computer accessories, regardless of brand. AmericanCellPhoneDrive.org takes on old phones to refurbish and resell or recycle them if they are beyond repair. Enter your ZIP code to find a drop off location near you. The World Computer Exchange offers a similar service, but with computers. They take on old machines and gadgets and use them to help close the digital divide experienced by developing countries. They have several chapters across the US, but if none are nearby, you can simply mail your old computer to them.

If it's just simply time for your device to be sent to the electronics graveyard, seek out the proper recycling center near you. Nonprofit group Call2Recycle offers drop-off locations at retailers across the US where you can get rid of rechargeable batteries and cell phones. Similarly, Earth911 will point you to nearby recyclers who can help you properly discard of your old electronics. Otherwise, make sure to check with your local or state government, as they may provide specific rules on how to go about getting rid of your electronics.

More like this
7 climate podcasts to help you make sense of the future
By AJ Dellinger
Pandora, the world's largest jewelry company, will no longer use mined diamonds
By Vanessa Taylor
Elon Musk has finally realized Bitcoin is awful for the environment
By AJ Dellinger
Stay up to date