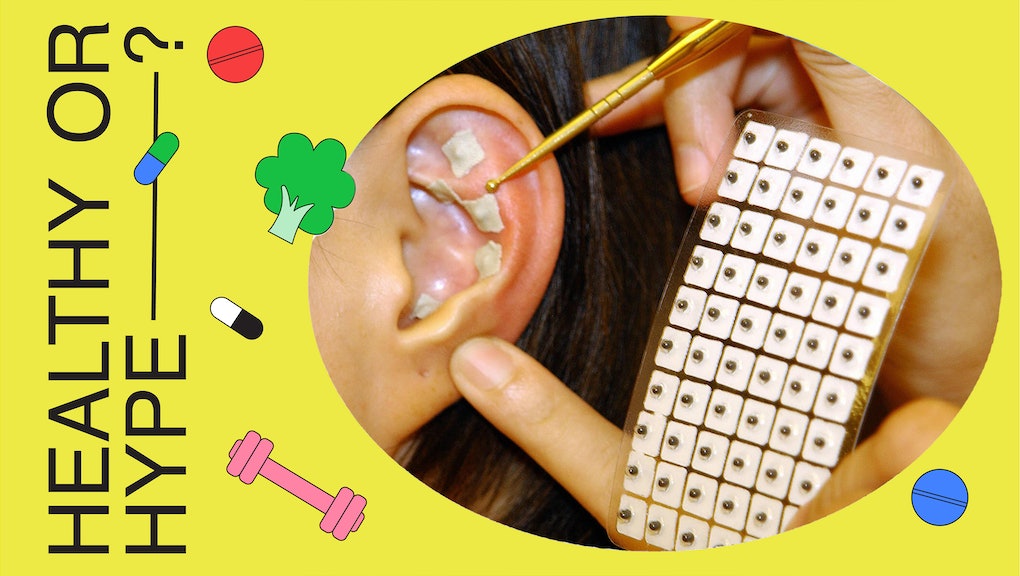 Ear seeds for anxiety: Do they really work?

They’re wellness products that conveniently double as fashion statements: tiny, adhesive beads, known as ear seeds, placed onto specific pressure points on your ear depending on what ails you. Some TikTokers claim that sticking them onto certain points can help us high-strung souls actually chill for once. Do ear seeds really work for anxiety, though?

Even after scrolling through TikTok after TikTok of people applying the gemstones and extolling their calming properties, I wasn’t 100% convinced. After all, the platform teems with dubious health advice, from lodging garlic cloves into your nostrils to clear your sinuses, to filing your teeth into terrifying nubs so you can be fit for veneers. To get to the bottom of whether ear seeds really quell anxiety, I spoke with Michael Fredericson, a sports medicine physician at Stanford Health Care, who's also certified in medical acupuncture.

Ear seeds are based on a subset of acupuncture known as auricular acupuncture, Fredericson says. According to traditional Chinese medicine, energy flows through pathways in the body known as meridians, as he previously explained to me, and blockages in this flow can result in disease. Acupuncture can unblock them.

In auricular acupuncture, the idea is that acupuncture points in the ear “map onto the other meridian points that run throughout your body,” Fredericson says. “Just by treating those specific points, it’s sort of a gateway to treating the rest of the body.” Indeed, ear seed kits often come with a diagram of the ear, labeled with points that correspond to myriad health issues, such the common cold, stress, and shoulder pain.

Fredericson tells me that auricular acupuncture is “a well-established treatment” for various conditions, including anxiety. A search of the National Library of Medicine turns up several studies in which auricular acupuncture made participants less anxious. He notes that from a Western perspective, it might work by stimulating points that help calm the sympathetic nervous system, the part of our nervous system that quickens our heart rate, tenses our muscles, and sets other aspects of the flight-or-fight response into motion.

Some acupuncturists — like Fredericson when he still practiced as one — place tiny magnets on specific points on the ear to reinforce the treatment after the patient leaves the clinic. The magnets he used would stay on for a few days to a week.

But do ear seeds provide that same benefit as acupuncture needles or magnets do? “They easily could,” Fredericson says. “I think it's just a matter of whether the placement is accurate.”

In other words, it’s unclear whether the average person referring to a diagram will apply the ear seeds where they need to go. “There’s a level of sophistication to it and training in terms of how do you find the exact right point for the condition you’re trying to treat,” Fredericson says. For the amateur, “it would be pretty hit or miss” as far as whether they’d hit the point corresponding to the benefit they’re seeking. Assuming they do, though, Fredericson says the benefits could last a few days or more, depending on how well the ear seed stays in place and how much pressure it exerts.

Fredericson says ear seeds don’t seem to pose any risks, other than potential irritation to the adhesive used. They're not necessarily cheap, though. Although some brands sell kits for less than $10 on Amazon, others price them at $50 or more a pop. If you decide to experiment with them, you might want to take Fredericson’s recommendation to see a certified acupuncturist trained in auricular acupuncture so that they amount to more than pricey stick-on earrings.

Ideally, you’d ask them to apply the ear seeds for you a few times to make sure the treatment works, he notes, then show you how to mark out the points yourself. “I think if you try it on your own, it could be a little frustrating if you have no prior experience with something like this,” he says. Acupuncture is a sophisticated practice — one that takes more than watching a TikTok on ear seeds to master.