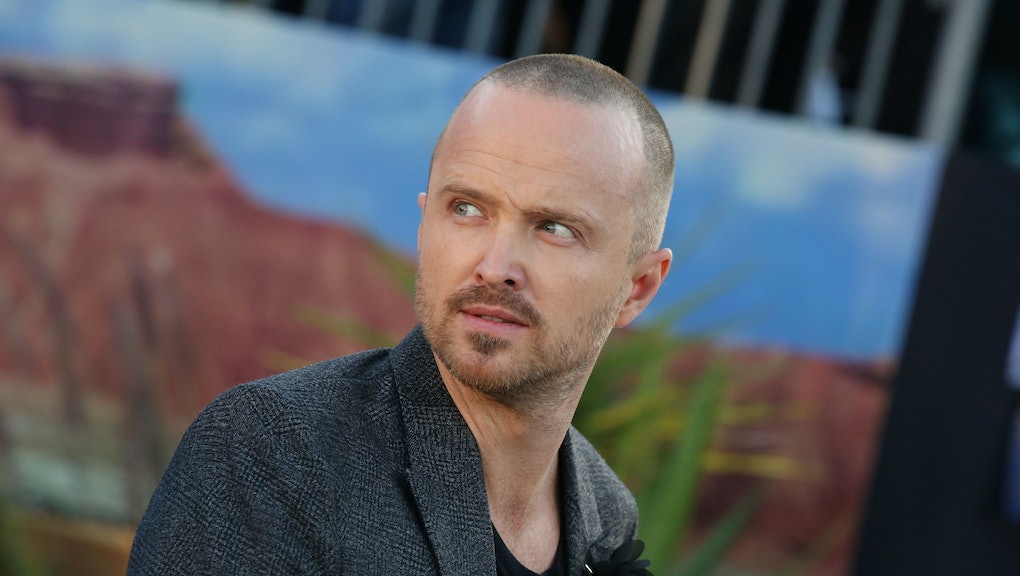 El Camino, the Breaking Bad movie, hits select theaters and Netflix on Friday. It’s a continuation of the landmark AMC show that reveals the fate of one of Breaking Bad’s most beloved characters — Jesse Pinkman (Aaron Paul), the sidekick and former-student of the show’s ruthless protagonist Walter White (Bryan Cranston).

Production was shrouded in secrecy. El Camino filmed in New Mexico with the fake title, “Greenbriar.” On Wednesday night, Paul told Jimmy Kimmel that despite seeing him around, residents never really caught on. “You shot in Albuquerque, where you shot the series, and no one in town… are they that methed out that nobody, nobody noticed that you were shooting a movie?!” Kimmel joked.

Rumors that a Breaking Bad movie was in the works circulated online for years, as did rabid fan speculation about the fate of Paul’s character after the show’s finale in 2013. Following a six year wait, the trailer for El Camino dropped just two weeks ahead of its premiere, during the Emmy Awards, with zero dialogue and little context for anyone unfamiliar with the series. But in the 24 hours after it aired, the trailer racked up 2 million views on YouTube.

Largely thanks to Breaking Bad’s massive and devoted fanbase, El Camino is shaping up to be a major cultural event — which most people will watch in the privacy of their living rooms. El Camino is getting an anemic theatrical release in 68 cities nationwide for its most devoted fans. But largely, it’ll screen on the same platform many viewers binged Breaking Bad on in the first place — Netflix.

During the long hiatus between parts one and two of Breaking Bad’s final season on AMC, from 2012 to 2013, older seasons became available on Netflix. Like House of Cards, it helped popularize binge viewing on the platform. By the time Breaking Bad returned, it had doubled its audience from 3 million to 6 million viewers, eventually peaking at 10 million for its critically-lauded series finale.

When creator Vince Gilligan won Best Drama at the 2013 Emmys, he told reporters, “I think Netflix kept us on the air. [...]I don’t think our show would have even lasted beyond Season 2. [...] It’s a new era in television, and we’ve been very fortunate to reap the benefits.”

El Camino’s tiny theatrical release stands in stark contrast to the other prestige TV series to get a filmic finale this fall — Downton Abbey, which screened at more than 3,000 theaters and raked in $31 million its opening weekend, a record for Focus Features. Limiting El Camino’s distribution to indie houses more accustomed to special screenings and limited runs is a gesture of fealty to the streaming giant.

Netflix has publicly been at-odds with Hollywood establishment and larger movie theater chains — which generally get a 90-day exclusivity window before a film is released on home video and streaming, so they get a chance to profit on ticket sales. Netflix, of course, only stands to benefit from cutting out the middleman and delivering content directly to its subscribers. The old guard, however, objects to Netflix’s practice of releasing films in theaters for a short window, just long enough to qualify for awards. That’s partly the reason director Martin Scorsese’s forthcoming opus The Irishman will screen on Broadway for a month before it drops on Netflix the day before Thanksgiving. The bigger chains like AMC balked at a three-week run — as well as the film’s three-and-a-half hour runtime.

Though it owes Netflix for its massive popularity, no doubt, Breaking Bad’s loyalty ultimately lies with its fans. And business maneuverings aside, Netflix is doing the fans a real service by making El Camino available to them instantly and for free, if they’re a subscriber. As The Wrap pointed out, “That’s a major cultural event, no matter how big the screen is.”