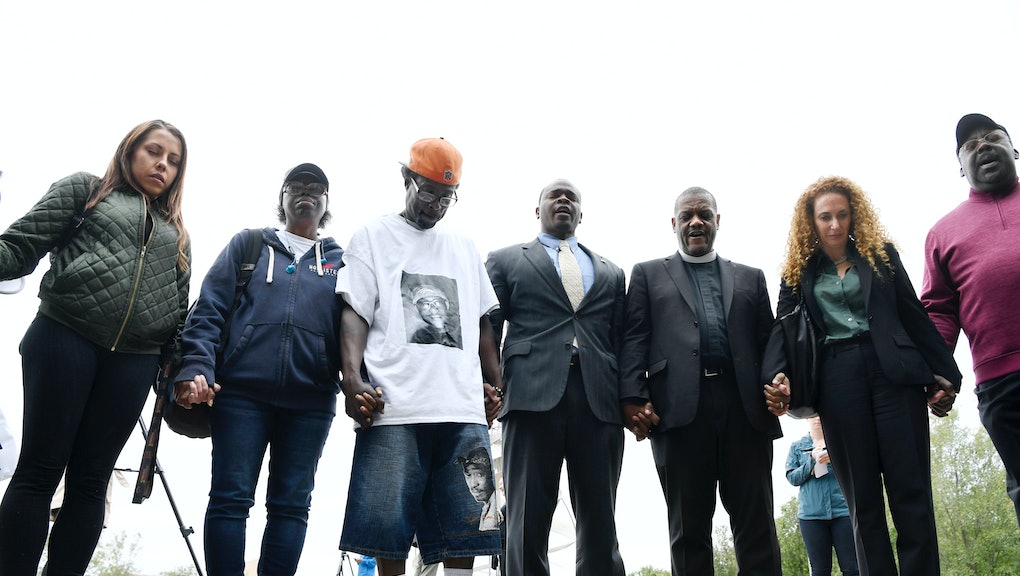 Elijah McClain's family is suing Aurora, Colorado, over his death

The parents of Elijah McClain will bring a federal lawsuit against the city of Aurora, Colorado, as well as against its police and the medical officials involved in the death of their son, the Associated Press reported Tuesday. The federal civil rights suit is an attempt to hold the city accountable for McClain's death and the lack of administrative action against the police involved.

On the night of Aug. 24, 2019, Aurora police officers stopped the 23-year-old on the sidewalk as he was walking home. They'd received a call about a person who looked "sketchy." The arrest turned deadly when the officers handcuffed McClain, placed him in a modified chokehold, and stacked their bodies on top of him at a combined weight of 700 pounds, per AP. McClain weighed just 140 pounds. He was already unconscious when city paramedics arrived to transport him to the hospital — and injected him with ketamine before placing him in the ambulance. He died at the hospital days later.

"We have filed this civil rights lawsuit to demand justice for Elijah McClain, to hold accountable the Aurora officials, police officers, and paramedics responsible for his murder, and to force the City of Aurora to change its longstanding pattern of brutal and racist policing,” McClain's family said.

Mari Newman, the attorney representing McClain's family, called the police's actions "torture," and said that the officers "unnecessarily initiated an unjustified use of force." Newman elaborated in the filing against the city that officials "[refused] even basic accountability, having failed to fire or even discipline anyone in relation to Elijah’s death."

In the aftermath of McClain's death, none of the officers involved were removed from duty, and Aurora Police Chief Nick Metz actually applauded their efforts. "I think overall the officers did a good job trying to calm Elijah down," Metz said. District attorney Dave Young investigated the incident and concluded that the officer's behavior followed departmental guidelines, refusing to reopen the case even after public outcry earlier this year. A coroner's report also found the cause of McClain's death "undetermined."

Between the police chief, the DA, and the city coroner, Newman and McClain's family believe that the city of Aurora is responsible both for McClain's killing and for the response to his death. The lawsuit more than a month after a national uproar against white supremacy and police brutality brought McClain's killing back into public consciousness — itself fueled by protests over the May 25 police killing of George Floyd, a Black man who lived in Minneapolis.

More like this
Supreme Court justices' political leanings: A guide to the 2021 court
By Vanessa Taylor
"She's gonna disappear": A GOP congressional candidate threatened to sic Russian hitmen on his opponent
By Rafi Schwartz
Someone please tell this poor simple insurrectionist which office he's running for
By Rafi Schwartz
Stay up to date