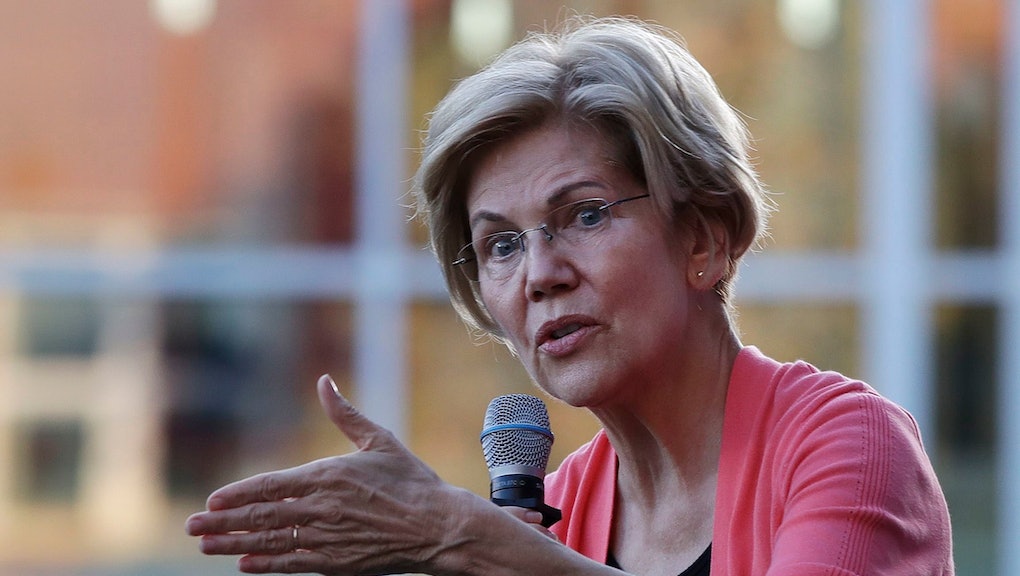 Tech companies have become some of the biggest political lobbyists in the world. The biggest firms — Amazon, Apple, Facebook, Google and Microsoft — have spent more than half a billion dollars combined on lobbying in the last decade, including $64 million in 2018 alone. The companies are regularly racking up new record highs in spending as they attempt to gain leverage with legislators and influences laws. Elizabeth Warren has seen enough of it and has a plan to fight back.

Warren announced on Friday that she wants to fight fire with fire, pushing back on the tech industry's army of lawyers by staffing up an office of experts who won't be so easily swayed by cash and confusing technical jargon. The candidate for president said that if elected, she would re-instate the previously eliminated Congressional Office of Technology Assessment. She also plans to put up new barriers that would hopefully make taking money from tech companies that toss it around freely much less of a temptation for members of Congress, including an increase in salaries for congressional staffers to make the positions more appealing.

The Office of Technology Assessment was first created in 1972 under the Nixon administration to help provide a level of technical knowledge and expertise to Congress when dealing with complicated matters of science and technology. In its original form, the office consisted of a 12-member board — six from each side of the political aisle, three of whom were members of the House of Representatives and three from the Senate. The office was quite prolific, producing more than 750 studies during its 24 years of operation, covering everything from the reality of human-caused climate change to the effectiveness of polygraph tests. A study produced by the office examining the value of synthetic fuels saved the federal government $60 billion. It also was one of the first groups to push to publish government documents electronically, making them more accessible to the public.

It seems like such an office would not only be a public good but an important service for members of Congress to lean on when they need some expertise. So what exactly happened to the Office of Technology Assessment? Well, would you believe that Republicans shut it down for thinking it was biased against their party? In 1995, Speaker of the House of Representatives Newt Gingrich went on a budget-slashing spree that eventually turned its ire to the Office of Technology Assessment, an office that had an annual budget of $21.9 million — a whopping 0.001 percent of the government's annual budget for the year. According to Gingrich, the office was “used by liberals to cover up political ideology” rather than to produce unbiased analysis of technical issues. Even members of his own party disagreed with that assessment.

Gingrich reasoned that the office was redundant, researching many of the same topics that other organizations did — except that wasn't the case. Other agencies like the Congressional Research Service do broad strokes research into a wide variety of topics and the National Science and Technology Council provides technical expertise for the executive branch, but there is no office available to members of Congress that specializes in technology policy. Only the Office of Technology Assessment provided that service, and that invaluable resource was revoked for, at best, dubious reasons. But hey, who could have predicted the ongoing technological developments of our modern era? Certainly not Newt Gingrinch, a man who has obsessed over science and technology for his entire lifetime, calling for doubling our spending on space exploration and given lectures on the history of microchips? (To be clear, Gingrich is no friend of science. He's called for bans on embryonic stem-cell research that has led to all sorts of medical breakthroughs, questioned the science behind climate change and advocated for teaching creationism in schools.)

The absence of the Office of Technology Assessment, along with a major drop off in the number of committees focusing on science and technology that should have stepped up in its absence, has resulted in members of Congress being left in the dark when it comes to tech policy. The result is that they lean heavily on experts from the industry itself, and there's almost always an agenda there. Surprisingly, if you call on companies like Google and Amazon to help explain the effects of technology consolidation, they are likely to tell you that there's nothing to worry about. Ask internet service providers about the effects of net neutrality and they'll probably tell you that it's not necessary. Sometimes tech companies have policies that align with the public interest, like Apple going to bat for end-to-end encryption without providing backdoors for law enforcement that would fundamentally ruin the integrity of the technology. But corporations will almost always put their own interests first, and they will spend significant amounts of cash to flood lawmakers and the public with biased information. Look no further than Uber and other ride-sharing apps pledging more than $90 million to fight a law in California that would make their drivers classified as employees.

It isn't the fault of members of Congress that they aren't masters of every topic. As former congressional staffer Sasha Moss pointed out in an op-ed she penned in 2015, members of Congress are expected to become experts in as little as 48 hours in order to be as informed as possible before committee hearings and votes. That isn't enough time, especially with the number of experts on staff dwindling because salaries for those positions have stagnated and even declined in recent years. But that lack of expertise leads to exchanges like Senator Orrin Hatch asking Facebook CEO Mark Zuckerberg how his company makes money, and Zuckerberg replying smugly, "Senator, we run ads."

Moments like that makes it look like our lawmakers don't know what they are doing, and like tech companies can run circles around them. That doesn't serve the public, even if it does produce a good meme or two. The Office of Technology Assessment never should have gone away in the first place, but there is no better time than right now to bring it back. Warren might not be an expert in science and technology, but she doesn't need to be — and she's smart enough to know it. What she is an expert in is having plans, and planning to bring back the Office of Technology Assessment is certainly a good one.