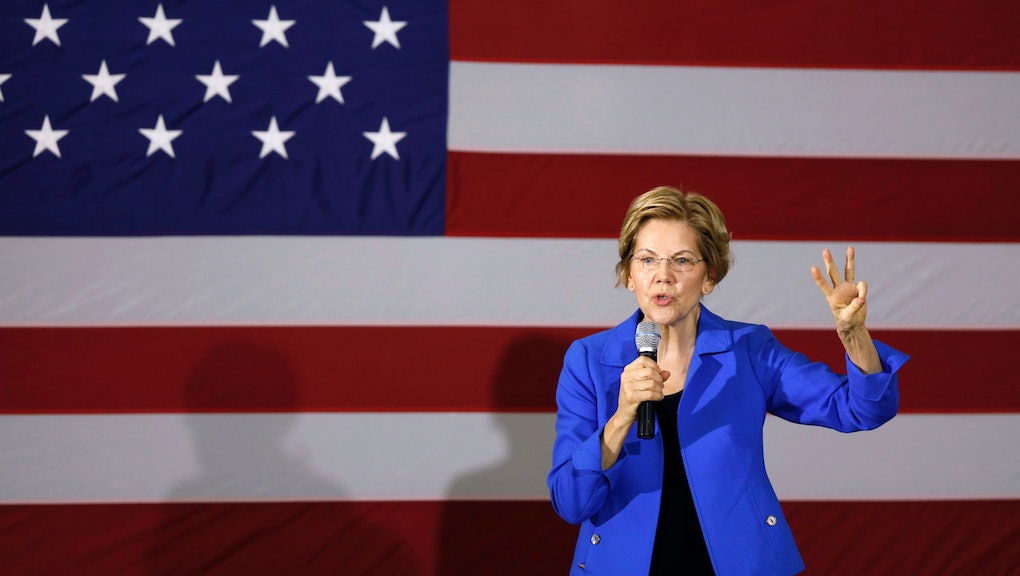 On Monday, Elizabeth Warren released her K-12 education plan, and it’s a doozy. Characteristically ambitious, Warren’s plan centers around a massive cash infusion into public education, calling for around $450 billion in new spending over the next 10 years. The money will go toward increasing teacher salaries, giving teachers new funds to pay for supplies, and incentivizing investment in low-income students. She also announced her intention to ban for-profit charter schools and cut federal funding for nonprofits. Warren’s plan additionally goes into detail on de-emphasizing “high stakes” testing as a means of proportioning out funding, as well as proposes a $25 billion fund for expanding health-care access at existing school clinics and putting $50 billion towards school infrastructure. In total, it will cost around $800 billion.

The plan represents an attempt at wealth redistribution on a grand scale, relying on her proposed wealth tax of 2% of all personal assets over $50 million to fund a large investment in lower-income education. “We should fight back against the privatization, corporatization, and profiteering in our nation’s schools,” she said in the plan announcement.

Warren is the last major participant in the Democratic primary to release her education proposal. In addition to pumping money into the system, Warren lays out detailed proposals that she says will ensure that the funds are distributed more equitably than they are now.

As it stands, school funding is largely dependent on property taxes, which means that public schools in wealthy neighborhoods end up with vastly more funding than schools in places where homes are worth less — irrespective of how many students actually live in the districts. Warren’s plan would change that system, instead pouring money into lower-income neighborhoods by expanding Title I funding, which is distributed at the federal level to high-poverty schools. She would quadruple that funding, from $15 billion to $60 billion; her top 2020 rivals, Vermont Sen. Bernie Sanders and Vice President Joe Biden, have proposed tripling it. In addition to increasing federal funds, Warren’s plans also details changes at the state level.

“This plan is the only one that has focused clearly on pushing states to make their own funding formulas more equitable,” says Scott Sargrad, vice president of K-12 education policy at the Center for American Progress. “Federal funding is only about 8 or 9 percent of total K-12 funding, so pushing on state-level funding, which is 45 or 50 percent of that money, and trying to make that funding more progressive, is really important.”

Because the federal government can’t directly dictate how states spend that money, Warren plans to use financial inducements to push them in a more equitable direction. Currently, only 11 states use so-called progressive funding formulas, which means sending more money to schools in poor districts than those in wealthy ones. Warren plans to use federal funding as a reward to get more states to invest heavily in lower-income students; she would require that states hinge their funding formulas on progressive wealth distribution before they could access her proposed $60 billion in Title I federal funds.

The plan also focuses specifically on desegregation and investing in schools that serve Black and Latino students. “Students coming from families with lower incomes in historically disadvantaged communities that have been disinvested in need even more resources,” Sargrad notes.

With her proposal, Warren has also taken a firm stance in the charter school wars. Over the past two decades, Presidents George Bush and Barack Obama both supported initiatives to provide federal funding to privately-run charter schools, which are generally not unionized and have faced strong pushback from teacher’s unions. In her education plan, Warren comes down firmly against the charters, promising to cut federal funding for such institutions and outright ban for-profit charters, which make up around 15% of the sector. Biden’s plan did not mention charter schools, though Sanders made similar anti-charter promises in his education proposal.

The two biggest teacher’s unions endorsed Warren’s education blueprint in statements released by her campaign. Randi Weingarten, president of the American Federation of Teachers, said that the Warren outline “categorically rejects the [Betsy] DeVos agenda to divert much-needed resources from our public schools by rejecting for-profit charters and vouchers of any form,” referring to the current education secretary’s pro-charter stance.

Sargrad notes that Warren’s hard line on charter schools may erase some of the progress they are known to make. In some cases, he says, “evidence is pretty good that charters can be a really important strategy for improving the quality of education for low-income students in urban areas.” Still, he notes that Warren’s plan addresses some of the “legitimate criticisms” of charter schools, specifically involving “virtual for-profit charter schools and management contracts with for-profit entities.”

“The focus is on making sure every single neighborhood public school is a great school,” said Bharat Ramamurti, an economic adviser to the Warren campaign, in an interview with The New York Times.

In order to pay for her ambitious proposals, Warren will rely on her wealth tax, which constitutes a tax of 2% on all personal wealth over $50 million. Warren’s campaign estimates that this would raise $2.75 trillion over the next decade. The plan would massively transfer wealth from the 1% to the lower-income communities who would receive increased education funding. The Wall Street Journal reports that with its $800 billion price tag, Warren’s education blueprint will use up the remaining balance of the money that her signature wealth tax will raise, after she additionally promised it would fund her universal child-care program, expanded K-12 funding, and her plans to abolish student debt and establish tuition-free public college. In all, it means the projected $2.75 trillion raised by the tax will be spent entirely on education.

But the fact that she’s already maxed out her wealth plan in projected spending this early may be a sign that Warren is undercutting herself in the future. It’s easy to campaign on a plan that depends on raising money from the wealthy to give to the less privileged. But with the money already tapped, what will happen when she needs to announce funding for other ambitious ideas, like Medicare-for-All, which promises to be wildly expensive — and thus has made for a good attack line from her rivals? Warren has said that she’ll announce a plan to fund the health-care proposal soon. But with her wealth tax tapped, that will likely require wading into more politically unpopular territory, including broad taxes on the middle class.