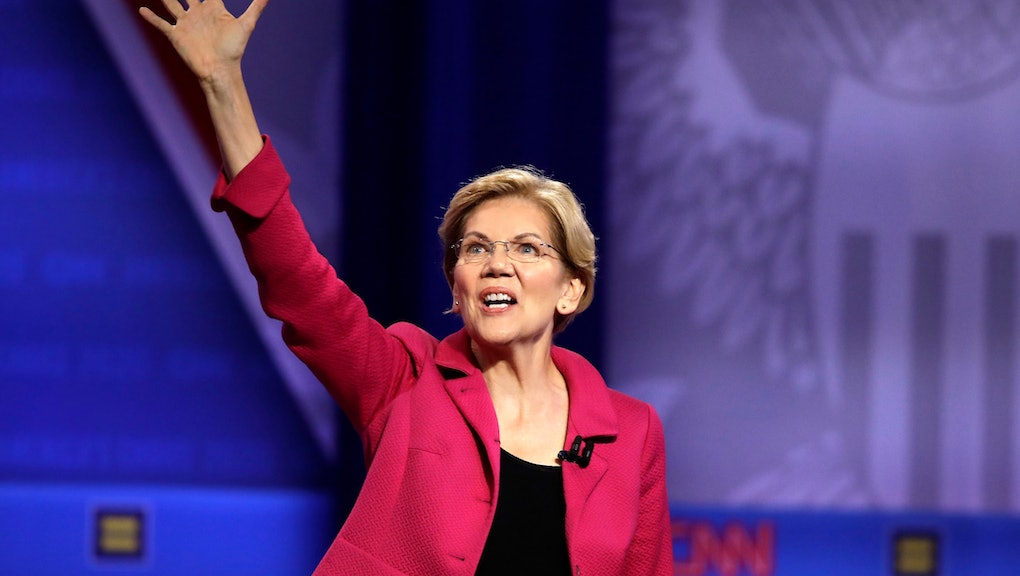 In a postapocalyptic novel he published earlier this year, legendary science fiction writer Neal Stephenson described a future where the American heartland has become a violent right-wing hellscape known as “Ameristan.” People living there enforce the laws of Leviticus literally, crucifying those who disobey. Stephenson describes these people as having been “Facebooked” into oblivion, their savage theocracy spurred into existence by a massive fake news campaign on social media. As shared reality crumbles, people who rely on social media for news slide into tribal barbarism. While this may be a hyperbolically negative illustration of America's future, Sen. Elizabeth Warren's fake Facebook ad shows how easily the real-life social network can be manipulated.

Considering the way Facebook has made billions of dollars by encouraging people to post misleading information that then goes viral — and fiercely resisted any attempt to rein in this scourge — and Stephenson may not be so far off the mark. Just last week, Facebook announced that it would allow politicians to make false claims in paid ads. The announcement came after controversy erupted around a Trump campaign ad titled “Corruption,” which falsely claimed that Vice President Joe Biden had offered $1 billion to the Ukrainian government in order to assist his son Hunter Biden.

Many TV stations refused to run the ad, but Facebook didn’t blink an eye. And after Biden complained, Facebook sent his campaign a letter in which it said that Trump’s ad didn’t violate any of the site’s policies.

“Our approach is grounded in Facebook’s fundamental belief in free expression, respect for the democratic process, and the belief that, in mature democracies with a free press, political speech is already arguably the most scrutinized speech there is,” wrote Facebook’s head of global elections policy, Katie Harbath. Facebook skeptics noted that Harbath is a former Republican operative who previously served on Rudy Giuliani’s presidential campaign and the National Republican Senatorial Committee.

Then, over the weekend, Warren made clear that she won’t ignore Facebook’s accepted role as the favored battleground of right-wing information warriors — even if the company itself will. The surging 2020 candidate bought a political ad on the site in which she falsely claimed that Facebook founder Mark Zuckerberg had endorsed President Trump for re-election, in an effort to throw the website’s flawed approach to false information into stark relief. The ad, which began running last Thursday, read, “You’re probably shocked, and you might be thinking, ‘how could this possibly be true?’ Well, it’s not.”

Warren’s point was that Facebook’s abdication of its role as an arbiter of truth has serious consequences. The ad pointed out that “if Trump tries to lie in a TV ad, most networks will refuse to air it. But Facebook just cashes Trump’s checks. Facebook already helped elect Donald Trump once. Now, they’re deliberately allowing a candidate to intentionally lie to the American people. It’s time to hold Mark Zuckerberg accountable.”

Many noted how unusual it is for the company to respond directly to its critics. Typically, Facebook doesn’t engage directly with political opponents, even as it has been lambasted by critics across the political spectrum for everything from its role in Russian election interference in 2016 to its shockingly lax privacy policies. Its PR arm has never responded so aggressively to the legions of right-wing critics who have kept up a drumbeat of bias allegations against the company; after the House GOP invited the far-right pundits Diamond & Silk to testify against Facebook in 2018 congressional hearings, Facebook apologized to them, despite their disingenuous claims.

But Warren appears to have spooked the social media giant. She has said that if elected president, she’d go after Facebook with anti-monopoly laws designed to break up the company. In leaked conversations last month, Zuckerberg told employees that he’d “go to the mat” to fight Warren’s proposals, adding that a Warren presidency would “suck for us.”

All of this raises concerns that in its attempt to stay quote-unquote neutral, Facebook risks turning itself into something resembling an outright conservative media outlet. Ultimately, when one side is responsible for pumping out a vast majority of disingenuous propaganda, then refusing to enforce a ban on propaganda from all sides becomes a partisan approach.

These fears have been stoked by a Monday report in Politico that Zuckerberg has been meeting with high-profile Republicans like South Carolina Sen. Lindsey Graham and Fox News host Tucker Carlson for off-the-record dinners at his California home. Politico quoted a former government official concerned “that Zuckerberg is trying to appease the Trump administration by not cracking down on right-wing propaganda.”

In response, Zuckerberg took to his own Facebook page, writing, “There's some press today discussing dinners I've had with conservative politicians, media, and thinkers,” and adding, “To be clear, I have dinners with lots of people across the spectrum on lots of different issues all the time. Meeting new people and hearing from a wide range of viewpoints is part of learning. If you haven't tried it, I suggest you do!”

This all-sides-matter rhetoric is exactly Zuckerberg’s problem. He allowed Facebook to be used as a vehicle for foreign interference and fake news in 2016, and it seems like he’s ready to make the same mistakes in 2020 — which is perhaps arguably worse, considering that this time around he knows the stakes.

Even irrespective of Zuckerberg’s supposed non-partisan dinner plans, Facebook has made clear that its allegiance is not with facts, but rather with politicians who pay the company millions of dollars to be able to lie to its vast, vast user pool. That may be good for its shareholders in the short term, but as far as America’s future as a functioning democracy goes, it seems like a strong indicator of a Category 5 disinformation hurricane heading our way.