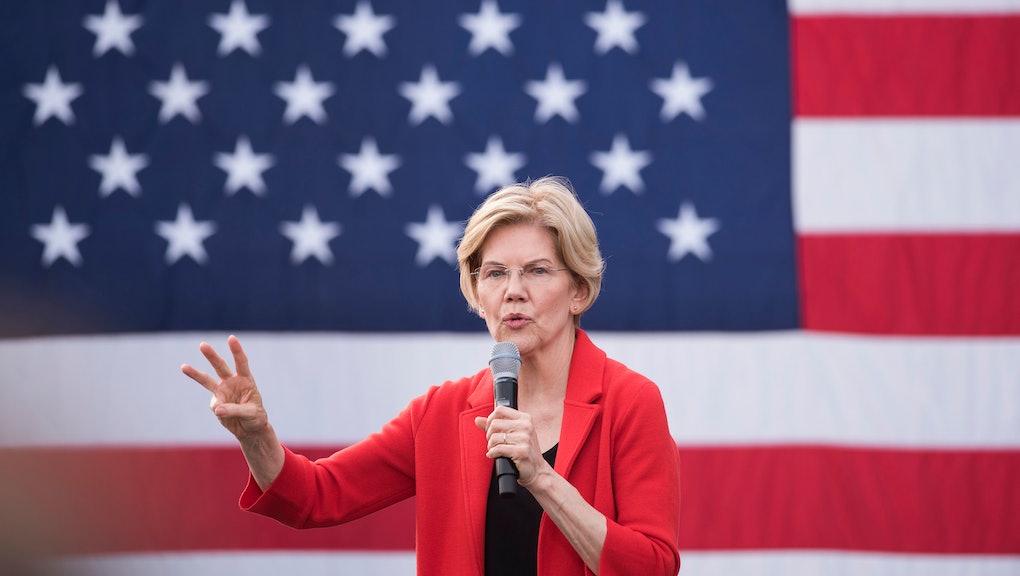 LGBTQ+ Americans have historically received unjust treatment by the United States government, but some politicians are now looking to correct past wrongs. On June 20, Massachusetts Senator and Democratic presidential hopeful Elizabeth Warren introduced the Refund Equality Act, a bill that would benefit same-sex couples formerly discriminated against through the U.S. Tax Code due to unequal marriage laws.

If the act passes, LGBTQ+ couples married in states where their union was recognized before gay marriage was legalized nationwide in 2013 could amend their past tax returns to receive IRS refunds. According to NBC News, that's approximately $57 million in total owed to countless couples who weren't able to jointly file federal tax returns prior to the Supreme Court's decision.

As Warren noted in a statement, her home of Massachusetts was the first U.S. state to legally recognize same-sex marriage back in 2004. Yet because the government's definition of marriage didn't match the state's, many married LGBTQ+ couples in Massachusetts, depending on their incomes and individual finances, were prevented from receiving the refunds they deserved.

“The federal government forced legally married same-sex couples in Massachusetts to file as individuals and pay more in taxes for almost a decade,” Warren said. “We need to call out that discrimination and to make it right — Congress should pass the Refund Equality Act immediately.”

This isn't the first time Warren has spoken up about and called for change on the issue. In July 2017, the senator proposed the first version of the Refund Equality Act, meant to refund married same-sex couples an estimated $67 million that they unfairly paid prior to the Defense of Marriage Act (DOMA) being overturned. Though co-sponsored by 36 members of Congress, the act was stalled, and therefore had to be reintroduced this year.

Warren's new version of the bill complements the Promoting Respect for Individuals’ Dignity and Equality (PRIDE) Act of 2019 that was introduced to Congress on June 18 by Representatives Judy Chu and Andy Levin. If approved, this legislation would also allow same-sex couples married in states that recognized gay marriage before DOMA was overturned to file for refunds with the IRS. Both the PRIDE Act and Refund Equality Act aim to readjust the systematic discrimination by the U.S. government against LGBTQ+ people in terms of taxation.

"This bill will correct an older injustice against same-sex couples and put money directly back into the pockets of families who have earned it," Chu said in a statement. "For too long, discriminatory laws penalized same-sex married couples by denying them the ability to file jointly and claim tax refunds they were entitled... Because of IRS restrictions, these couples cannot amend their returns to claim reimbursement credits for many prior tax years. The PRIDE Act solves this problem."

In addition to her work alongside Chu and Levin in helping LGBTQ+ couples get refunds, Warren also recently revealed that her housing plans as president would provide reparations for people of color who have been systematically discriminated against in the home buying process. "America needs to face the things we’ve done wrong and take steps towards making it right," Warren tweeted on June 19. It's clear that along with her like-minded peers, the politician is intent on introducing legislation that'll create a more equitable society and correct historical injustices against marginalized groups.