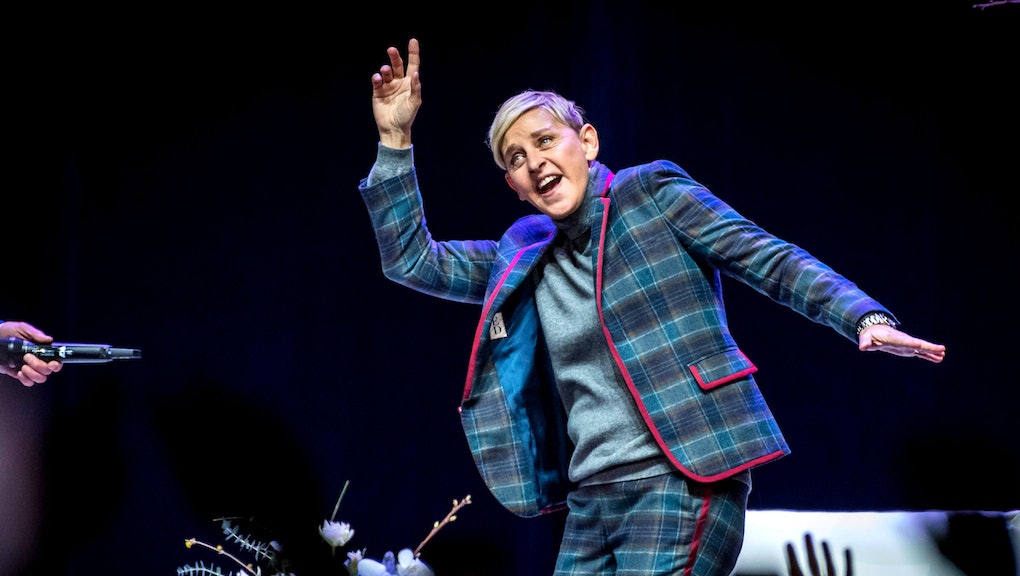 Ellen DeGeneres's friendship with George W. Bush is why people hate the rich

Talk show TV revolves around professionalized friendship: Cheerful hosts with a lapdog demeanor charm their celebrity guests with a social grace that we, the audience, only wish we had. Usually it’s an endearing escape from reality. But sometimes it leaves a bad taste, especially when their guests are accused rapists or, say, confirmed warmongers with 7-figure body counts who happen to have occupied the White House.

Case in point: Ellen DeGeneres defended her friendship with President George W. Bush on her show Tuesday, after a photo of her and the former commander-in-chief at a football game over the weekend sparked Twitter outrage.

“They thought, why is a gay Hollywood liberal sitting next to a conservative Republican president?” DeGeneres said on The Ellen Show. “A lot of people were mad. And they did what people do when they’re mad: They tweet.”

“Here’s the thing,” she added. “I’m friends with George Bush. In fact, I’m friends with a lot of people who don’t share the same beliefs that I have. We’re all different and I think that we’ve forgotten that that’s okay. … Just because I don’t agree with someone on everything doesn’t mean that I’m not going to be friends with them.”

But Bush isn’t just someone who disagrees with DeGeneres on how much they should each pay in taxes on their vast fortunes. Nor is he merely a staunch Christian who’s just not into gay marriage. DeGeneres framed her relationship with Bush around their “beliefs,” but Bush isn’t unpopular because of his beliefs — he’s reviled because of the actions he took as the most powerful man in the world on the basis of those beliefs, like starting a war in Iraq over false premises that left a million people dead, covering up torture at the Abu Ghraib prison, mishandling Hurricane Katrina, and fighting against LGBTQ rights (including DeGeneres’ own right to marriage).

Bush’s recurring presence on the late-night circuit — whether he’s being portrayed as an endearing doofus by Will Ferrell or trading sketches with Jimmy Kimmel — feels like discordant whitewashing of the brutal austerity, state violence, and foreign bloodshed on his record. Friends can argue about their different beliefs over a beer. But if one of them has blood on their hands, it takes complicity from the other to ignore the stain on the glass. Friendships like DeGeneres and Bush’s reinforce the notion that for elites, the consequences of politics matter only to other people far beyond the contacts list in their always-new iPhones.

This fracas is one of several similar incidents between famous people over the past few years. Many people were outraged when Jimmy Fallon ruffled Donald Trump’s hair like he was a golden retriever on his show in 2016. There’s something unsettling about a supposedly friendly encounter that comes with such a stark transactional underpinning: Trump, credibly accused of sexual assault at that point by more than a dozen women, got a free image buff, while for Fallon, the head pat telegraphed that his show was a safe space for anyone who might be watching, ethical considerations aside. “I was just trying to have fun,” Fallon said later, as if that wasn’t obvious.

Fun is the grease in the wheels of the TV industrial complex — games and jokes establish a charmed social dynamic where everyone gets along, unlike the discordant real world on the other side of the screen. They offer a retreat for an audience tired of gruesome headlines. But anti-politics isn’t a viable escape route if you’re dodging Hellfire missiles or locked in a cage at the border. In this context, fun starts to seem less like a goal unto itself and more like a carnival mask over the grinning skull of American empire.

More like this
The reason Simone Biles quit was more heartbreaking than we could've ever imagined
By Brandon Yu
The U.K.'s biggest asshole is crossing the pond to join the goblin army at Fox News
By Rafi Schwartz
I never want Tucker Carlson to stop talking about Nicki Minaj's cousin's friend's enormous balls
By Rafi Schwartz
Stay up to date