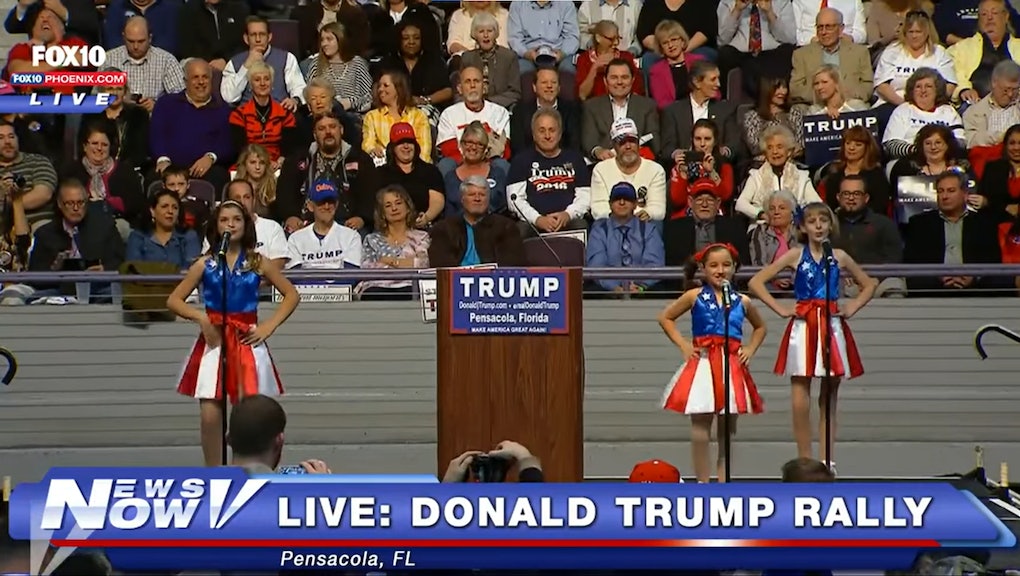 Even these pro-Trump children's singers are jumping ship for Biden

You can already see the beginnings of Trumpworld post-election maneuvering, with a few Reasonable Republicans distancing themselves off-the-record and other officials leaning harder into baseless election fraud conspiracies. Nearly anyone with close ties to President Trump will have to figure out a way forward under a Joe Biden presidency, and one viral children’s singing group who appeared at a Trump rally has already retooled its act for Biden.

According to a report from Insider, the USA Freedom Kids, who performed at a Trump rally back in 2016, are re-recording their viral, overly jingoistic song “Freedom’s Call” with lyrics that incorporate “Build Back Better.” “We're just looking forward to hopefully a more unifying president and, and thus far everything Joe Biden is saying is exactly what a president ought to be saying,” the group’s manager, Jeff Popick told Insider. Check out the change in lyrics:

The 2016 version went: "President Donald Trump knows how / To make America great / Deal from strength or get crushed every time."

But as of Sunday, when they plan to head to the recording studio, they'll be singing: "President Joseph Biden knows how / To Build Back Better / And be the dude with Ameritude!"

The piece details a bitter breakup with Trump, after Trump’s team reportedly promised the group an opportunity to help them sell albums instead of payment for their rally performance. Popick claims that they were booked for another rally in Iowa in short order, but it was abruptly canceled since the campaign didn’t want the girls “upstaging Donald Trump.” Popick filed a lawsuit against the campaign, which was settled in December of 2016.

After seeking business advice from a Simon Cowell affiliate, Popick and the girls took it easy for a bit. Popick paints himself as one of the first people to morph from Trump evangelist to outright skeptic, claiming he’s “completely, 100% narcissistic.” I wonder if those things could be related!

Popick claims the group always had apolitical aims, never seeking to divide after performing at the Trump rally. They apparently extended an offer to perform for Hillary Clinton in 2016, which wasn’t accepted. Now they’re going for the sort of non-political middle ground events, like veteran groups, galas, and parties, with a few that inadvertently become highly politically charged, like police events.

Trump’s entire life has been spent looting and refusing to let people upstage him through petty feuds, so it’s hard not to feel at least some sympathy for people who get swept up in his orbit — and especially youngsters without political agency of their own. But it’s hard to take a pivot like this too seriously when the business winds are blowing in a new direction. Despite the group’s public-facing pivot, Popick doesn’t tell Insider how he voted in either election.