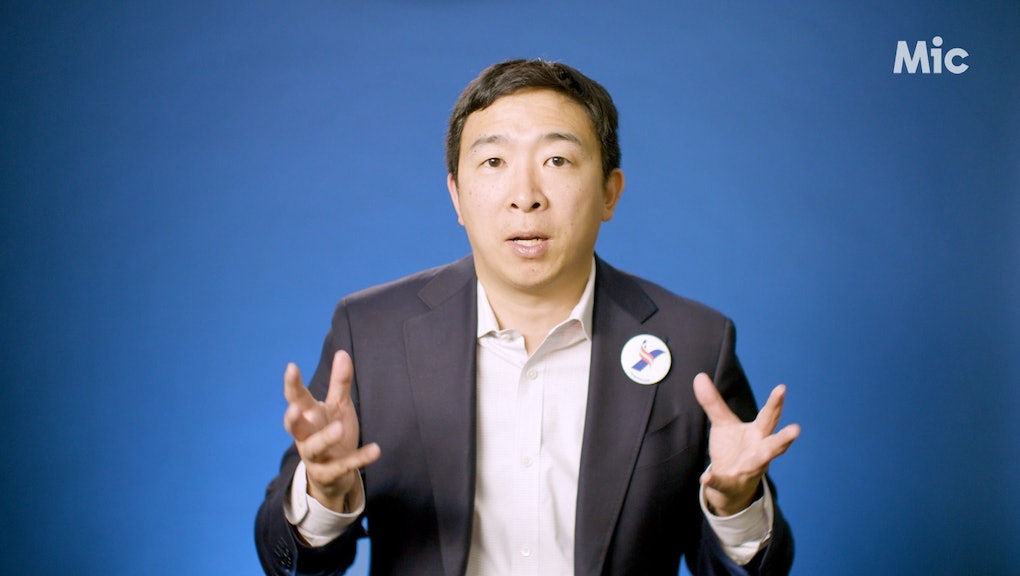 Andrew Yang may not be a front-runner to win the Democratic presidential nomination in 2020, but his candidacy has attracted support from all corners of the internet — even the darkest ones.

Yang, a former entrepreneur from upstate New York, is a long-shot candidate who’s running for political office for the first time on a platform centered around enacting a universal basic income. He has next to no chance of winning the nomination and his polling numbers remain very low.

But his campaign has cultivated a rabid fanbase across social media, on sites like Reddit and even on 4chan. Although Yang would be the first Asian American to win the Democratic nomination and general election, his campaign has caught fire with white supremacists and the alt-right.

The curious trend appears to have begun following his media appearances earlier this year on Joe Rogan’s podcast and with Tucker Carlson, and has only grown in the months since. His supporters, who call themselves the “#YangGang,” range the political spectrum, but some regularly share memes littered with toxic and anti-Semitic themes on messaging forums online.

As that support has gathered steam, Yang has been forced to answer questions about it, and in a new exclusive video interview with Mic, Yang addressed the matter head on: “The idea of some racial superiority is antithetical to what I believe and what my campaign stands for.”

Still, Yang did admit that he’s excited about the enthusiasm that his campaign is attracting online, from individuals across the political spectrum. “It's one reason why I'm the candidate to beat [Trump] in 2020,” he said. “The fact that the different types of people from different points of the political spectrum are excited about my campaign, is something that I'm encouraged by.”

In a primary race filled with a record number of women candidates, Yang, too, would make history as an Asian American if he were to win the nomination or general election. Yang said he was bullied while growing up because of his identity and has written openly about his Asian heritage in his recent book “The War on Normal People.” But Yang also said his Asian heritage is only a “very marginal aspect” of his presidential candidacy.

Instead, he said he’s laser-focused on addressing the core economic issues which he believes helped President Trump win the support of Rust Belt voters and get elected. At the heart of his platform is a universal basic income — or, as Yang calls it, a “Freedom Dividend” — which would give $12,000 to every American annually in order to stem the tide of job loss due to automation.

Similar pilot programs are being implemented in cities like Stockton, California and have attracted support from leaders across the tech industry. But while this idea is in vogue in certain intellectual circles, it has so far failed to catch steam amongst the Democratic primary electorate. Yang, however, believes a universal basic income is key to solving the country’s economic challenges, and can also help resolve a host of social issues, including issues affecting women.

“The Democratic party wants to empower women. Instead of talking about empowering women, we should do something about it,” he said. “There are millions of women across the country who are stuck in exploitative or abusive jobs or relationships that would be improved simply by putting $1,000 a month in their hands.”

Comments like this are likely to alienate certain key parts of the Democratic electorate, but may also help to explain Yang’s surprising rise. He’s discussing issues that other candidates are mostly ignoring, and he’s doing so in an unfiltered manner befitting of a first-time candidate who’s learning how to campaign on the job.

Watch the full interview below and learn more about Yang’s campaign here:

More like this
New York has set aside a massive, first-of-its-kind fund for undocumented workers
By Rafi Schwartz
Jailhouse lawyer Johnnie Cook is fighting for pandemic justice
By Mai Tran
Why grand jury proceedings are so secretive
By Vanessa Taylor
Stay up to date