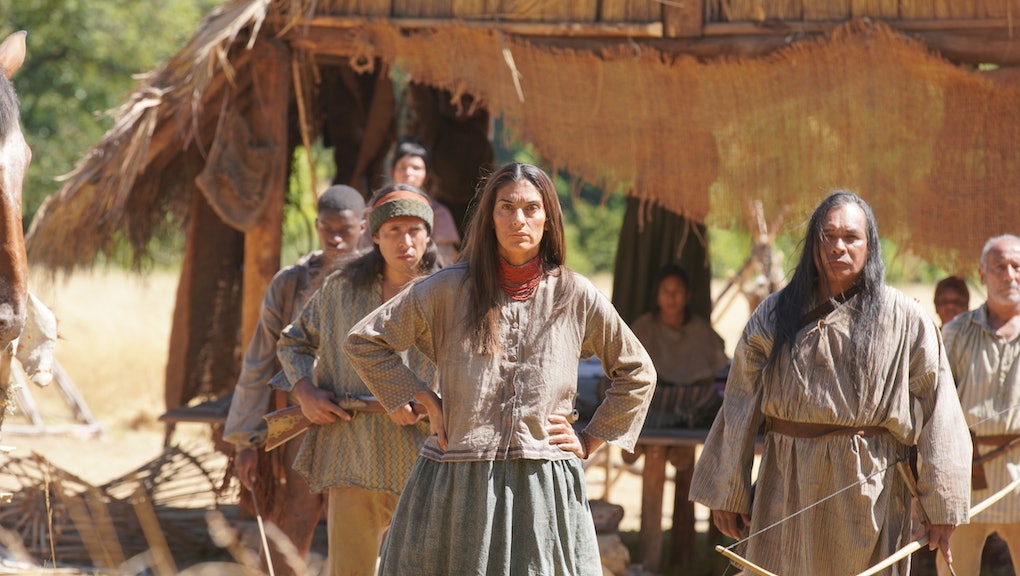 'Exterminate All the Brutes' is a messy, ambitious documentary that ties together genocide, white supremacy, colonialism ... and Josh Hartnett?

Raoul Peck’s critically acclaimed I Am Not Your Negro utilized the words of James Baldwin to weave together a lyrical documentary that ruminated on whiteness and racism in the United States. That film was, in many ways, an easy sell that put renewed emphasis on Baldwin’s work, the effect of which was seen in increased book sales and scholarship.

Peck’s new four-part HBO series Exterminate All the Brutes utilizes the ruminations of more recent public intellectuals: historian Sven Lindqvist, whose 1992 book on Europe’s imperial history in Africa gives this series its name; Roxanne Dunbar-Ortiz, whose 2014 book An Indigenous People’s History of the United States seeks to tell this country’s history from the perspective of the colonized; and Haitian anthropologist Michel-Rolph Trouillot’s book Silencing the Past: Power and Production of History. Exterminate All the Brutes dwarfs I Am Not Your Negro for sheer breadth and scope, taking a kaleidoscopic, time-and-place-spanning look at the history of genocide, white supremacy, and colonization around the world. A noble goal, certainly, but whether it achieves what it sets out to do, however, is an open question.

With the new documentary, Peck seeks to rip apart the common narrative of historical progress, from primitive technology to the modern world. He does this through the juxtaposition of archival footage, clips from movies like Apocalypse Now and Indiana Jones, and his own home movies from Haiti and the Democratic Republic of Congo. Added to these are anachronistic dramatic stagings, most of which follow actor Josh Hartnett as a nameless, archetypal white colonizer who pops up in various points throughout history. Peck juggles these disparate elements to draw parallels to seemingly unrelated phenomena, while also trying to deconstruct our fixed, obstinate notions of history. In perhaps the most obvious example, Peck stages a scene where a 19th-century Anglican preacher lectures on the separation of the races (Africans, Chinese, and the civilized white European) to an auditorium filled with contemporary people of color.

Violence, disruption, and erasure are important facets of Exterminate and they are important talking points for Peck, who narrates that there are “three words that summarize the whole history of humanity: civilization, colonization, extermination.” The scene described above turns on all three, a metastasized Darwinism weaponized to permit and retroactively justify countless atrocities. Many viewers are likely to latch onto Peck’s self-reflexive methods, pointing out the necessity of projects like Exterminate that destroy dangerous received narratives of history in favor of fresher perspectives. Many will also question whether or not these methods work, what exactly is novel in Peck’s project beyond formal creativity, and how the experimental nature of the series with regards to how its various subjects are (or aren’t) related ends up being disorienting rather than enlightening.

There are several areas of Exterminate that don’t cohere. Sven Lindqvist’s book of the same name acts as a historical travelogue of the historian’s observations in Africa. It heavily features Lindqvist’s thoughts and responses to Joseph Conrad’s Heart of Darkness, which follows British ivory traders in the Congo. This is echoed in Peck’s series, where Conrad’s novel is used as a kind of motif for colonial violence and the dehumanization of marginalized people, from enslaved Africans to Jews in the Holocaust. The amalgam of voices here does nothing to diminish the objectifying, almost voyeuristic nature of Lindqvist’s outlook, which places tired binary notions of beauty and suffering onto Black bodies. It also recreates an authorial distance with Africa in Peck’s dramatic reenactments that recreates Conrad’s exoticism. Africa in Exterminate appears much the same as it does to Nigerian writer Chinua Achebe when dissecting Heart of Darkness, “as setting and backdrop which eliminates the African as human factor.”

One might describe these scenes as unflinching, searing, impressionistic, but they function on the misguided idea that shock and disgust are productive reactions.

But beyond setting, Peck needs to convince the audience not only that temporally and geographically disparate instances of genocide are linked by a common dehumanizing mindset, but that they are also typified by unspeakable violence. In particular, where Hartnett’s time-traveling overseer is concerned, these reenactments of real brutality to Africans and Native Americans take on a graphic, self-satisfied repetitiveness. Here is Hartnett shooting a woman point-blank in the head. Here is Hartnett scalping a murdered Native American. Here is Hartnett forcing a young African boy to cut the hand off an unruly member of his own community. Here is Hartnett taking a bath after hanging more Africans. Here is Hartnett lobotomizing an elderly Black man. Such scenes reach into the speculative as the series goes on. In one, Hartnett and a Black preacher stumble upon a group of enslaved white children being driven and beaten by African handlers. In another, Hartnett washes himself in a river and gazes into the distance, watching footage seemingly taken from the Charlottesville Unite the Right rally as it passes him by. One might describe these scenes as unflinching, searing, impressionistic, but they function on the misguided idea that shock and disgust are productive reactions. Any truth to their origin is obscured by how deliberately these moments are constructed, deliberation that becomes tiresome and confusing.

In scholar Rita Felski’s book Uses of Literature, she writes, “...the essence of shock is to be jarring. Unlike pity and fear, it is fueled by an essential element of surprise; while we can fear what we already know, shock presumes an encounter with the unexpected, an experience of being wrenched in an altered frame of mind.” It’s not Peck’s fault that this essential element of surprise when it comes to the onscreen brutalization and murder of Black and brown bodies has been missing now for some time. But it is Peck’s fault for trying to instill it anyway, for assuming these depictions reveal something new or thought-provoking, or that they would garner empathy from the audience watching.

And while his use of juxtaposition teases out threads of relation between events like Columbus’s arrival on the continent, Hollywood’s long tradition of rewriting history in favor of freedom-seeking, enterprising whites, and Peck’s familial intersection with imperialism, there is a lingering suspicion that such essayistic flourishes are nonsensical, that Peck’s collage of images does little more than name-check places, dates, and people without drilling deeper. (The documentary-standard Evil World Leader montage, for instance, makes its appearance a few times here.)

The director’s attempt to interrogate his own inclusion in the series is no more successful. As narrator, creator, and frequent subject, Peck is uniquely positioned to examine how notions of authorship and narrative structure influence our perceptions of history. But such moments feel self-indulgent, especially when Peck inserts clips from his past films. If we are meant to critique a scene from the 1949 musical On the Town, where Ann Miller sings about primitive men as Gene Kelly and Frank Sinatra dance and whoop in caricatures of a variety of indigenous peoples, how are we meant to view the inclusion of Peck’s own work, which is given moral distance from the subjects of scrutiny he is trying to highlight?

Peck is not the first person to urge Western audiences to reconsider their place in history, though you would be forgiven for thinking he might think that.

In a conversation about the series with a mentor who pointed me to Felski and Achebe, I was also reminded to look at James Baldwin’s essay “Everybody’s Protest Novel,” from Notes of a Native Son. In one passage, Baldwin highlights the underdeveloped morality of Uncle Tom’s Cabin, saying, “This is the more striking as one considers the novels of Negro oppression written in our own, more enlightened day, all of which say only: ‘This is perfectly horrible! You ought to be ashamed of yourselves!’” This applies to Exterminate All the Brutes, which is a kind of historical protest film.

But Baldwin’s observation goes further: “The ‘protest’ novel, so far from being disturbing, is an accepted and comforting aspect of the American scene, ramifying that framework we believe to be so necessary. Whatever unsettling questions are raised are evanescent, titillating; remote, for this has nothing to do with us, it is safely ensconced in the social arena, where, indeed, it has nothing to do with anyone, so that finally we received a very definite thrill of virtue from the fact that we are reading such a book at all.”

That thrill of virtue, more than grave duty, seems to animate how projects like Exterminate sit within the culture. Peck is not the first person to urge Western audiences to reconsider their place in history, though you would be forgiven for thinking he might think that. His friendship and eulogy for Lindqvist is touching, but seems to be taken from an entirely different film. This may be true given that Peck originally envisioned Exterminate as a 15-part series. Who’s to say if this would have made for a more legible end product. By the end of the series, the question “Who is the audience for this?” clashes uncomfortably with “Who is going to be taught by this?” There can only be so many conspicuously produced, vital projects like Exterminate before we start to think about the climate and context in which they’re made and received. Whether or not we need productions like this is secondary to thinking about what we need from them, who exactly “we” is, and if their mandate to edify and inspire action is really working.

More like this
The bittersweet success of 'Shang-Chi' after a year of pandemic-fueled Asian hate
By Brandon Yu
Even in death, Michael K Williams was, and still is, Brooklyn for life
By Keith Nelson Jr.
Brain scans revealed how racism weighs on Black women's health
By Sierra Carter
Stay up to date