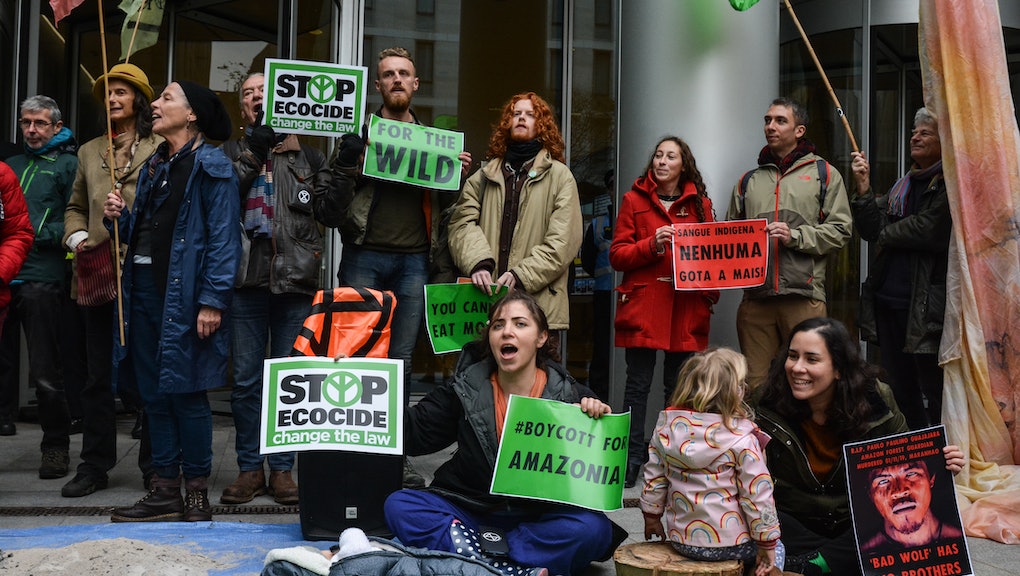 The Democratic party is supposed to be the party of progress, especially when it comes to issues like climate change. While most politicians within the party are more than happy to pay lip service to the ongoing environmental crisis that we face, actual attempts to pass legislation that may help make a difference when it comes to cutting back on emissions and protecting the future of the planets are few and far between. A group of young people are running out of patience for this type of inaction and are planning on showing Democrats their dissatisfaction. Protestors from climate activist group Extinction Rebellion plan to occupy the office of Nancy Pelosi, the Speaker of the United States House of Representatives, in order to display their frustration.

On Monday, at least 20 protestors made their way to Pelosi's office in Washington, D.C. with the goal of securing a one-hour, on-camera meeting with the Democratic leader. They plan to occupy the office until that happens, carrying out an extended hunger strike that at least 300 people have agreed to participate in, according to The Guardian. In a letter sent from Extinction Rebellion to Pelosi prior to the strike, the group accused the Democrat from California of turning a blind eye to the reality of climate change and its effects both near- and long-term — everything from the wildfires that have been burning in Pelosi's own backyard to the potentially devastating effects that could cause massive damage to our infrastructure and society in the next few decades. "Meet with us or leave us to starve while you jet to your Thanksgiving feasts and cocktail parties in the glow of a burning world," the activists wrote. "It is with a heavy heart that we will deny ourselves our basic needs. May our pain finally sound the alarm."

In terms of politicians to target for this kind of effort, Nancy Pelosi makes a whole lot of sense. Not only is she the Speaker of the House and the de facto leader of the Democrats in the only branch of government that the party currently controls, she also sits on a Select Committee on climate change established by the Democratic party earlier this year. If anyone has the power to push for real change through legislation within the party, it's Pelosi — and by all accounts it seems like she would want to do just that. She has called the climate crisis the "existential threat of our time" and has called for Congress to "work to put an end to the inaction and denial of science that threaten the planet and the future." Pelosi also has a strong voting track record on the rare occasion that climate-related bills do come up for a vote. According to the League of Conservation Voters, Pelosi scored 100 percent in 2018 when it comes to voting on the right side of environmental issues, and has a lifetime score of 94 percent. She also vocally supported the Global Climate Strike earlier this year when millions of young people took to the streets around the world to try to encourage politicians to take action and think about their future. The energy of the advocates and activists are demonstrating the power of our young people to effect lasting, transformative change to save the people and places we love," she declared at the time. Now we'll see just how supportive she is of young people and their actions when it's happening right in her office.

While Pelosi may say the right things and cast the right vote when the opportunity presents itself, what Extinction Rebellion wants from the Democratic leader is, well, for her to lead. That is something that Pelosi has struggled with on this issue, instead choosing to stifle politicians with new, big ideas to address climate change. When Alexandria Ocasio-Cortez introduced the Green New Deal earlier this year, it presented the opportunity to not only pass comprehensive and significant pieces of legislation that would address the climate crisis, it also opened up the door for a conversation about what types of policies will be best suited to both bring change and be politically feasible. Instead of engaging with the plan or even bringing it up for a vote, Pelosi was incredibly dismissive of the bill and its backers. In an interview with Politico, she (probably intentionally) referred to the proposed legislation as "The green dream, or whatever they call it," and said, "nobody knows what it is, but they're for it, right?" She said that she welcomed "all the enthusiasm that people want to put on the table," but dismissed the Green New Deal because "we have to operate in a way that’s evidence-based, current in its data."

There is certainly plenty of evidence to suggest that the Green New Deal wouldn't have passed, especially once it got to the Republican-controlled Senate — and if by some miracle it managed to secure enough votes there, it surely would have died at the desk of President Trump, a well-documented climate denier. But that is perhaps the greatest difference in approach between Pelosi and the likes of AOC and Extinction Rebellion. The latter is less concerned about making things politically palatable. They see a crisis that needs to be addressed — and soon — or we will all suffer the consequences when climate change rears its ugly head over the coming decades. Pelosi, on the other hand, has been in Washington since the 1980s. She is more concerned with what is feasible, even in the face of an existential threat. To her, there is no real reason to bring forward legislation that will inevitably just fail. The problem is, as long as Republicans control any significant portion of the government, these policies will almost always be doomed to fail. So perhaps it's time to let the Republicans kill the bills rather than saving them from even going through a vote. Until Pelosi decides to lead in a way that is more in line with the climate activists, she's likely to continue to be confronted by protestors who ostensibly share the same politics as her.