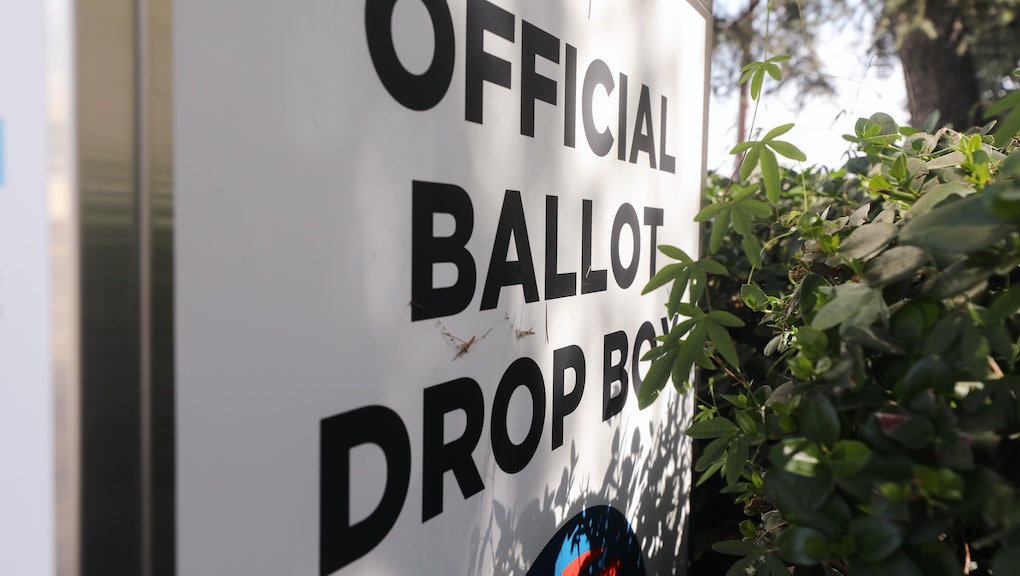 Extremely sketchy unofficial ballot boxes are popping up all over California

President Donald Trump has made election fraud one of the centerpieces of his seemingly preemptive refusal to accept a potential defeat in the upcoming election. He has railed against the (virtually nonexistent) dangers of mail-in voting, and in an inadvertently prophetic self-own, condemned ballot drop boxes as part of a "rigged election" that is "so bad for our Country."

The irony of Trump's assault on drop boxes becomes clear with reports that three separate California counties have seen unofficial — and potentially illegal — ballot drop boxes installed as part of a seemingly coordinated effort by the state's Republican party.

According to the Orange County Register, which first reported the outbreak of non-sanctioned ballot receptacles, unofficial boxes have appeared in Orange, Fresno, and Los Angeles County.

One box, which appeared outside a church which has reportedly hosted republican candidates running for local office, was described as "approved and brought by the GOP" on the congregation's social media accounts. Another was promoted on Twitter by a regional GOP field director who wrote "Doing my part and voting early. DM me for convenient locations to drop your ballot off at!" in a now-deleted tweet featuring a picture of him posing next to one of the uncertified boxes. And on its website, the Fresno County Republican Party reportedly listed multiple ballot drop-of sites, including its own headquarters — none of which have been officially approved by the county.

In a statement to the Washington Post, California Secretary of State Alex Padilla hinted that his office might take action against those found to be directly responsible for the faux ballot boxes.

Both the state and national GOP have defended the unofficial boxes on Twitter, insisting they're allowed under a 2016 California law that allows for ballot harvesting by permitting completed ballots to be handed over to a designated person who delivers them on voters' behalf.

As Padilla explained in a memo to all county clerks and registrars of voters in the state, the GOP boxes are not compliant with the 2016 law, as they don't have a designated person to actually deliver the completed ballots, nor have their boxes undergone the extensive security testing necessary to be approved as official.

“It would be like me installing a mailbox out on the corner," Kelley explained. "The post office is the one that installs mailboxes."