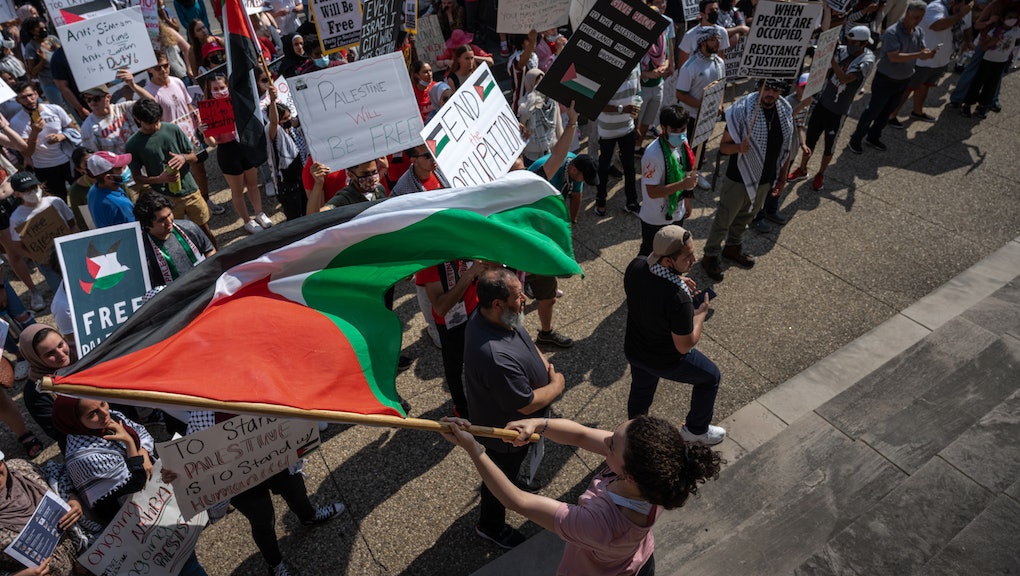 Facebook has come under fire for allegedly censoring content from Palestinians and people showing support for those who are currently being victimized by the recent war between Israel and Palestine. Left voiceless on the platform itself, pro-Palestinian activists have found a different forum via which to air their thoughts about Facebook: the app's reviews. Across social media, there has been a coordinated effort to tank Facebook's score in the Apple App Store and Google Play Store by leaving a flurry of one-star reviews.

As of Monday, the Facebook app in Apple's App Store has seen its rating drop to 2.3 out of 5 stars. One user review, titled "Justice for Palestine," states "Facebook does not support legal social support to religious minorities," while claiming that the company has deactivated accounts and removed content that supports the Palestinian fight for freedom. Over on the Google Play Store, the Facebook app for Android devices has dropped to a rating of 2.4 out of 5 stars. A recent one-star review in the Play Store claims that Facebook has "bias against Palestine and anyone who talks about the conflict there."

The situation has apparently caused quite the panic in the Facebook offices. According to NBC News, internal conversations among Facebook employees have noted that users are pissed about the company's handling of the ongoing conflict in the Middle East. The review-bombing campaign has been labeled as a "SEV1" or "severity 1" situation, code for a major issue and the second-highest priority that a problem can be given. A "SEV0" occurs when the platform goes down.

According to internal messages obtained by NBC News, Facebook employees are well aware of how the company's handling of content is being perceived. "User trust is dropping considerably with the recent escalations between Israel and Palestine," an engineer wrote. "Our users are upset with our handling of the situation. Users are feeling that they are being censored, getting limited distribution, and ultimately silenced."

Facebook has reportedly contacted Apple and Google to remove the negative reviews. Apple declined, according to NBC News, while it is not clear if Google has responded. Mic reached out to Facebook for comment regarding the campaign, as well as to Apple and Google to learn whether the companies will allow the reviews to remain up. None of the companies responded before publication.

Documentation of social networks, including Facebook, censoring pro-Palestinian content is widespread. Last week, nonprofit digital rights advocacy group Access Now highlighted a myriad of examples of tech companies including Facebook censoring and limiting the spread of hashtags that highlighted acts of aggression by Israeli police forces. A number of journalists reporting on the ongoing conflict in Palestine have had their accounts suspended. Earlier this month, The Intercept reported that Facebook policies have suppressed criticism of the Israeli government and made it next to impossible for Palestinian activists to highlight acts of abuse and violence carried out in the region.

Meanwhile, conservatives like Sens. Ted Cruz (Texas) and Josh Hawley (Mo.), who have hounded Big Tech companies like Facebook and Twitter over claims that they censor conservative voices, have had nothing to say about the well-documented instances of censorship of pro-Palestinian voices. Weird!

More like this
We might have AI-powered murder drones to worry about now, a U.N. report suggests
By AJ Dellinger
Mark Zuckerberg joins the ranks of rich dudes getting owned by a band
By Vanessa Taylor
Uber offered its drivers help with health care, but of course it was a mistake
By AJ Dellinger
Stay up to date