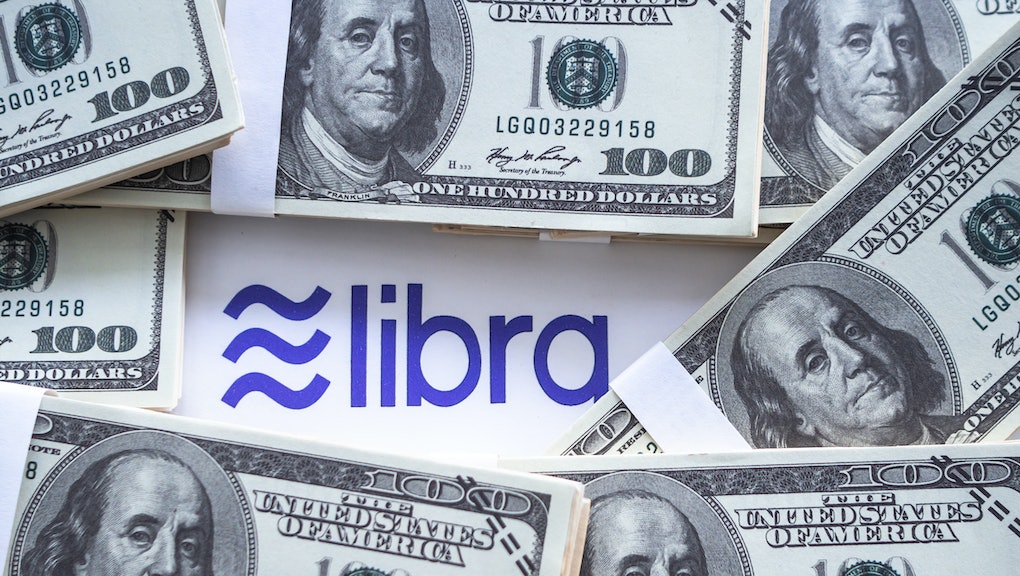 Earlier this year, Facebook announced it is planning to launch its cryptocurrency, Libra, sometime in 2020. If Democrats in Congress have anything to say about it, though, that debut will be delayed indefinitely. Members of the party who sit on the U.S. House Financial Services Committee have proposed a new bill — not-so-subtly named the Keep Big Tech out of Finance Act — that would bar companies like Facebook from entering into the financial services space.

The draft proposal, first reported by Reuters, draws a hard line in the sand for tech companies that are eyeing an opportunity to launch their own cryptocurrency. It bars any large technology firm — defined as any online service that is "predominately engaged in the business of offering to the public an online marketplace, an exchange, or a platform for connecting third parties" and generates at least $25 billion in annual revenue — from establishing its own "digital asset." In order to ensure that companies fall in line, the proposed bill implements a fine of $1 million per day for any company that violates the rules.

It's worth noting that while that fine is steep and significantly more serious than most penalties the government has handed out to tech companies in the past, it probably wouldn't bother Facebook all that much. On Friday, the Federal Trade Commission agreed on a massive $5 billion fine against Facebook for a number of incidents in which the company mishandled user data, including the notorious Cambridge Analytica leak. Facebook already has most of the cash for the penalty set aside and the company's stock actually went up once the fine was announced — so even when the company loses, it wins.

It's also not entirely clear if the Keep Big Tech out of Finance Act would actually end up applying to Libra. While Facebook is masterminding the whole thing, the cryptocurrency itself will technically be the creation of a nonprofit called the Libra Association. Facebook is just one of the founding members of the group, which includes major financial players like Mastercard and Visa, as well as tech giants like Uber and eBay. That, and the fact that Libra will be linked to fiat currencies including the U.S. dollar, making it more like a traditional payment platform, may allow Facebook to skirt any laws that attempt to apply additional scrutiny to its cryptocurrency.

To be clear, the Keep Big Tech out of Finance Act likely will not go forward. It may garner the support it needs in the House of Representatives, which is currently controlled by a Democratic majority but seems likely to die in the Senate where Republicans are likely to oppose it. That said, it might oddly have the support of President Donald Trump, who recently took a stance against cryptocurrencies. "Facebook Libra’s 'virtual currency' will have little standing or dependability," he tweeted last week. "If Facebook and other companies want to become a bank, they must seek a new Banking Charter and become subject to all Banking Regulations, just like other Banks." Regardless if it moves forward or not, the proposal throws down the gauntlet for what is likely to be a significant ongoing battle between legislators and big tech.

Tech companies have mostly avoided entering the heavily regulated world of finance. There has certainly been a bit of dabbling — Apple has launched its own credit card, and just about every major tech firm has offered some form of mobile payment service that allows people to move their money around. But Facebook's decision to launch its own digital asset has significantly accelerated the need to establish rules about how money is handled and who is allowed to handle it. Scrutiny of Libra and other potential services like it that would inevitably follow is starting to kick into high gear.

U.S. Congress will grill Facebook's blockchain lead, David Marcus, later this week. Other countries are getting in on the action, too. Mark Carney, the governor of Bank of England, said last week that Libra needs to be “rock solid right from the start, or it’s not going to start.’’ An upcoming meeting of finance ministers from G7 countries — the U.S., U.K., Canada, France, Germany, Italy, and Japan — will feature a working group that will focus specifically on Libra and will aim to establish policies to regulate the currency.

Whether the Keep Big Tech out of Finance Act ends up being part of the policy that is agreed upon to handle Libra and other financial plays made by big tech is unknown, but it does make clear that if Facebook plans to continue to move forward with its digital currency, it won't happen without some significant pushback along the way.

More like this
Honolulu police spent $150k on a robot dog to monitor homeless people
By AJ Dellinger
Jeff Bezos is going to space, which is the most divorced guy thing imaginable
By AJ Dellinger
Uber offered its drivers help with health care, but of course it was a mistake
By AJ Dellinger
Stay up to date