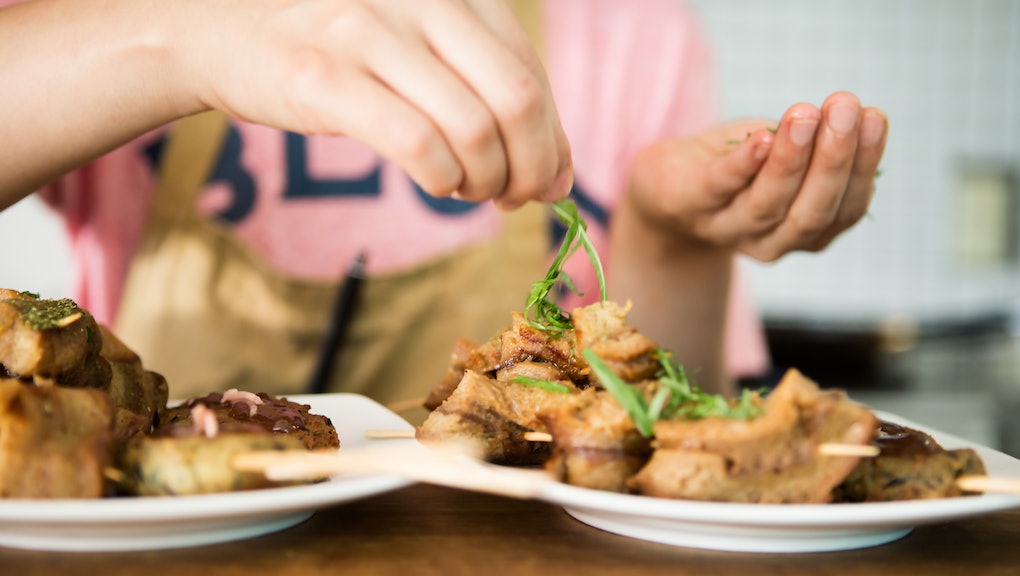 Fake meat's surprising evolution, from Buddhism to the Beyond Burger

While plant-based meat may seem new and buzzy, China began concocting it way before the Impossible Burger and Beyond Meat burst onto the scene, CNN reports. What’s more, its creations have approximated a far richer array of fake meats, beyond the “burgers” trending in the West, emerging from a food culture that has long celebrated ingenuity.

In China, the practice of imitating meat has its roots in Buddhism, introduced to the country roughly 2,000 years ago, during the Han Dynasty, and still practiced by about a fifth of its population, according to CNN. Many Buddhists are vegetarian, and the monasteries in China adhered to a strict vegetarian diet. Monasteries began imitating meat to sate visitors’ carnivorous appetites while still using and consuming only plant-based products, swapping out meat for tofu, gluten, and vegetables, VICE reports.

In the wake of the Han Dynasty, these dishes became “extraordinarily sophisticated,” Fuschia Dunlop, author of Land of Fish and Rice and other books on Chinese cuisine, told CNN. They even included imitations of delicacies, such as abalone and shark’s fin.

That ingenuity persists to this day. In Shanghai, for instance, you can order “roast duck” made with delicate layers of deep-fried tofu skin, and stir-fried “crabmeat” made with carrot, mashed potato, rice vinegar, and ginger, 1843 reports. Now, more than 300 restaurants serve imitation meat in China, according to China Daily.

Wang Jianguang told CNN about growing up eating “chicken wings” spun from peanuts and soybeans. Now, he works at Baihe Vegetarian, a restaurant in Beijing, where he cooks a variety of plant-based meat dishes, like “kung pao chicken,” made from king oyster mushroom, cashews, flour, and other ingredients, which come together to recreate the original dish’s savory-sweet flavor.

According to VICE, this creativity also extends to supermarkets, with imitation abalone, chicken, duck, and other “meat,” which consist primarily of gluten or soybeans, lining the aisles at SeeWoo supermarket in London’s Chinatown. Imitation meat has also provided a vital source of protein for people, like Wang’s family, who couldn’t afford to regularly eat meat, often a luxury, Dunlop told VICE.

I’ve seen this inventiveness in other types of Asian cuisine, as well, like at Vegetarian House, a vegan restaurant chain that serves primarily Asian dishes. One of my favorites is the Spicy Mambo — lion’s mane mushroom sprinkled with onion, garlic, red bell pepper, chili, and a spice blend — which reminds me of fried calamari. Based on Yelp reviews, the Spicy Cha Cha, a “shrimp” dish made with crispy yam flour shaped into crescents, topped with red bell papers, spices and various other ingredients, is a lauded favorite, too.

One of my favorites is the Spicy Mambo — lion’s mane mushroom sprinkled with onion, garlic, red bell pepper, chili, and a spice blend, according to the menu — which reminds me of fried calamari.

A few years ago, I began following Astig Vegan, a vegan Filipino food blog and YouTube channel, out of curiosity (and mild skepticism). As a Filipina, I know Filipino food includes plenty of vegetable dishes, but many dishes also feature meat — pork especially — as a flavorful and essential main ingredient. The chef behind the blog, RG Enriquez, became a vegan in college but didn’t want to forego the Filipino dishes that connected her to her identity and culture. “So, I’ve chased the flavors of my childhood favorites and veganized them,” she explains on her blog.

As with other approaches imitation meat, much of the joy I get from following Astig Vegan comes from the cleverness of the substitutions, especially in dishes I grew up eating, like longganisa, or sweet pork sausage. Enriquez’s version is a blend of extra-firm tofu, dried shiitake mushrooms, soy sauce, maple syrup, and other ingredients. She makes her vegan chicharon, or fried pork rinds, with either deep-fried dried yuba skin, or deep-fried dried shiitake mushrooms dipped in rice flour.

Recently, Enriquez posted an updated recipe for vegan dinuguan, or pork blood stew. She substitutes the pork with firm tofu and oyster mushrooms, and the blood with pureed black beans, which she says can be blackened further with activated charcoal. As different as this amalgam of flavors sounds, it's been a win, based on all the Instagram posts of people's at-home trials.

While I don’t plan on giving up meat anytime soon, I do genuinely enjoy imitation meat, especially in Asian cuisine. It’s not that I don’t find the Impossible Burger delicious, but the panoply of forms it takes in Asian food, and the history behind it, makes for a more fulfilling experience.

More like this
Will Michelin's Green Star finally inject some eco-consciousness into fine dining?
By Joseph Lamour
The pandemic will change the way we dine forever
By Hannah Cutting-Jones
An ode to quarantine meals that got us through the pandemic
By Melissa Pandika
Stay up to date