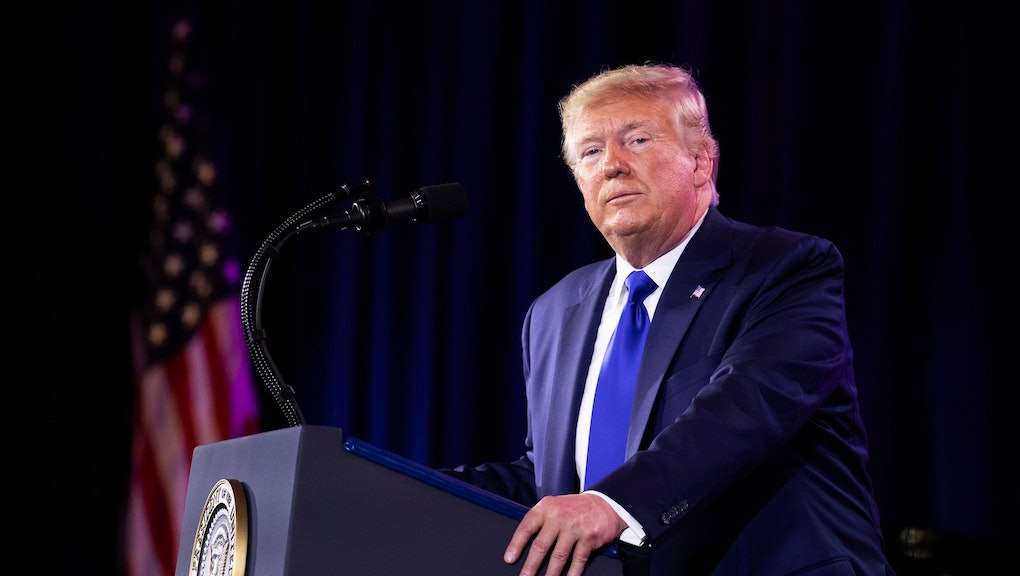 Last week, at a conference of President Trump’s supporters in Florida, attendees were reportedly treated to a rather disturbing form of entertainment. The New York Times reported that at the event, a video aired showing the president’s face superimposed over that of a gunman who opens fire in a church, in a clip taken from a massacre scene in the 2014 film Kingsman: The Secret Service. In this doctored version, the building is the Church of Fake News, and parishioners have been fashioned into news media organizations and Trump’s political opponents — victims’ heads replaced by the logos of organizations like CNN, VICE News, and MSNBC.

The president’s avatar is seen stalking his victims through the church pews, tackling them and shooting them in the head at point-blank range. There are also scenes in which the president viciously attacks political opponents like Mitt Romney, the Utah senator and former Republican presidential nominee; California Democratic Rep. Maxine Waters; Vermont Sen. Bernie Sanders, who's hoping to take on Trump in 2020; former FBI director James Comey; and John McCain, the late Arizona Republican.

Trump supporters have previously made parody clips in this vein from popular films, some of which have been retweeted by the president. But there has never been a clip with such a vivid depiction of violence that’s been endorsed in such a high-profile setting by some of the president’s key supporters. According to the Times, the event where the clip was screened was hosted by the pro-Trump group American Priority and featured top Trumpworld figures including Donald Trump Jr., Florida Gov. Ron DeSantis, and the former White House spokeswoman Sarah Huckabee Sanders. It was additionally located at the Trump National Doral Miami resort.

Most of the high-profile figures who attended denied having seen the video. “I was there to speak at a prayer breakfast, where I spoke about unity and bringing the country together,” Sanders told the Times. “I wasn’t aware of any video, nor do I support violence of any kind against anyone.” A spokesman for Trump Jr. said the president’s eldest son “strongly condemns the type of disgusting and graphic violence purported to be depicted in the video against members of the media.”

Meanwhile, Stephanie Grisham, Sanders’s successor as White House press secretary, tweeted Monday morning that Trump himself had not yet viewed the clip, “but based upon everything he has heard, he strongly condemns this video.” An organizer for the event told the Times the video was screened as part of a “meme exhibit,” adding, “Content was submitted by third parties and was not associated with or endorsed by the conference in any official capacity.”

These denials are all pretty weak, given the context. The video reflects a deep theme running through Trump’s speeches over the past three years, in which he often refers to the “fake news media” as an “enemy of the people." Just last year, a crazed Trump supporter sent pipe bombs to many of the figures depicted in the clip. None of the statements from anyone connected to the Florida event show any attempt to grapple with the connection between the president’s demonization of the media and the actual violence committed by his followers, which this video illustrates and endorses.

Instead, the official responses all have the distant, somber tone of crisis PR. The video is an embarrassment, so those connected to it are attempting to minimize and deflect their affiliation with it — without actually taking responsibility for helping to create the environment in which a Trump supporter might think a video like this is acceptable. After all, Trump Jr. often posts parodic memes along similar lines on his Instagram, with the violence only barely toned down. In 2017, the president posted a video of himself wrestling CNN to the ground on Twitter; just days before Trump shared that clip, Sanders had claimed at a press briefing that “the president in no way, form, or fashion has ever promoted or encouraged violence.” In its response to Trump’s tweet, the network quoted Sanders’ own words to devastating effect.

This latest video also begs a comparison to the infamous Kathy Griffin photoshoot, in which the comedian posed with Trump’s decapitated head. The photo sparked months of denunciations from the White House and led to Griffin losing TV hosting jobs. But now, when the efforts at “parody” are coming from their own side, the Trump administration is decidedly less concerned with the correctness of it all.

There's a word for that, and it’s hypocrisy.