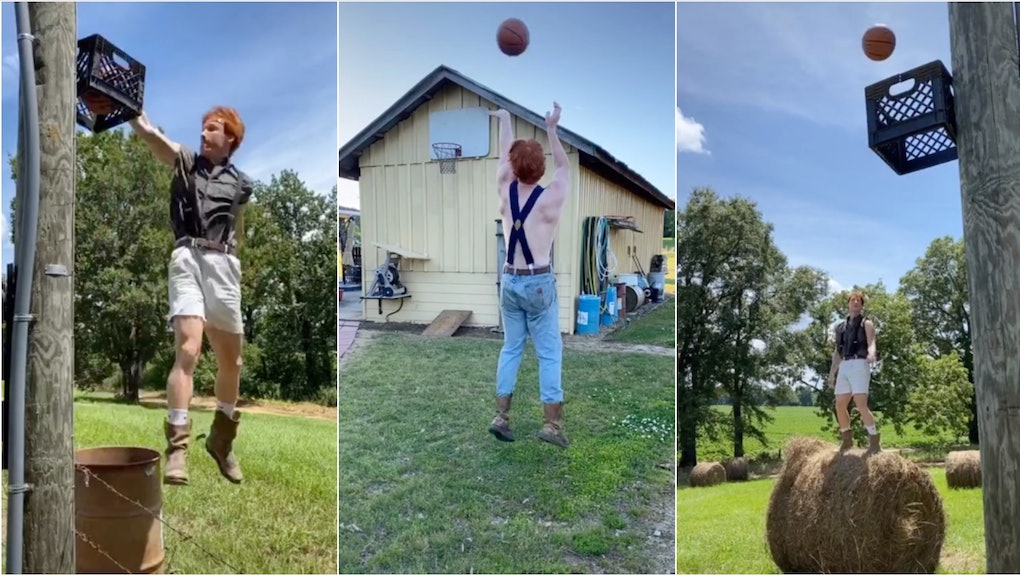 When the coronavirus pandemic shuttered gyms and public courts, 23-year-old Will Hartzell turned his grandfather’s farm, where he also works, into a private, open-air basketball training center. He affixed a hoop to the side of a barn and filmed himself sinking treys while dressed in boots and suspenders. His “Farm Hoops” videos on TikTok and Instagram quickly racked up millions of views, and the internet dubbed him “LeBarn James.” (Yes, he’s a little concerned about the real LeBron hitting him with a cease-and-desist at some point, especially since the basketball legend recently “liked” one of his videos on social media.)

ESPN, devoid of pro-basketball content (and all other live sports for that matter), took notice of Hartzell’s videos last May and began intermittently sharing them. The pandemic has been a drag, but Hartzell realizes it gave him a boost. “You couldn't have asked for a more perfect year than last year for everything I wanted to do, literally, because ESPN didn't have anything to post,” he tells Mic.

Hartzell isn’t just good at basketball, he’s also wildly inventive, constantly coming up with new and entertaining ways to challenge himself as an athlete — and entertain his followers. He affixed a hoop to the back of a pickup truck and sank moving shots while somebody drove it through a field. He bounds over hay bales and drains jumpers from a floating rowboat. One of his niftiest tricks involves a flaming basketball doused in lighter fluid that Hartzell sinks while it’s still on fire.

“LeBarn James” was back in the news this week, because SportsCenter shared a video of the homemade rebounding machine Hartzell built out of spare lumber, a net, a bucket, and string. (He was mildly miffed people weren’t identifying him by name.) In the very first video Hartzell put on TikTok, he used a slab of plywood as a makeshift rebounder, but he’s seriously leveled-up since then. “Now, literally, the comments are like, ‘If basketball doesn’t work, you need to be an engineer,’” Hartzell tells Mic.

In addition to the elaborate rebounder, he built a moving scarecrow defender, a DIY VertiMax, and a weight machine made of plywood and concrete blocks. He also built his own pool table, which flips over to become a ping-pong table, and felled a bunch of trees to construct a soccer goal.

Hartzell learned how to make his inventions a reality by working with his grandfather on the family’s Batesville, MS, farm. “My grandfather is literally the most innovative person that I've ever met,” he tells Mic. “When I was little, I was always building stuff with him in the workshop.” He still gut-checks designs with his grandpa before constructing them. A lot of his ideas are practical, geared towards making Hartzell a better athlete. But some of his creations are meant to impress his followers. “If people say I can't do it, then I have to do it,” he says.

That goes for sports other than basketball, too. Hartzell has filmed himself obliterating gourds with a baseball bat and “boxing a tree,” which is exactly like it sounds. From soccer to football to fishing, he’s a natural at them all. Meaning, he’s not a one-trick guy who shoots hoops on a farm. “I have plans. This is the thing that nobody understands: I have a hundred more ideas that I know are as big as what I've already done or bigger,” Hartzell said, describing his vision to build a whole arena and host “Farm Games” this summer.

Before finding social media fame, Hartzell’s day-to-day work was more modest. He helped out around the family farm, fixing stuff, helping grow soybeans, and raise a few cows. When I ask him about his unique “farmballing” uniform, suspenders and boots, he is perplexed: “You have to wear boots on the farm to protect your toes from heavy machinery,” he tells me. “The suspenders just keep your pants up. What exactly did you want me to explain?”

That kind of sums up Hartzell’s charm: he’s a genuine dude simply sharing his life and talents with the internet. Sure, he’s savvy enough that the initial idea to make basketball content spawned from a desire to make the sport part of his life again, since he’d played in school but wasn’t bound to go pro. That said, it’s Hartzell’s passion that propelled “Farm Hoops” to virality. It’s incredibly entertaining to watch someone do what they love.