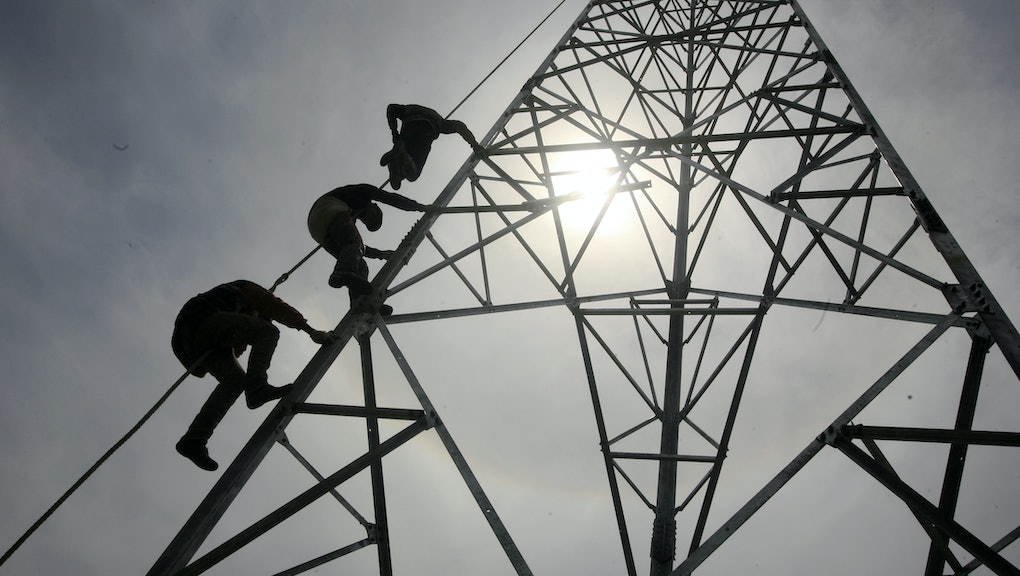 Does it ever seem like your cellphone is without service even when it seems like you are clearly within your coverage area? After all, every mobile carrier flashes those big maps of the United States that show the vast majority of the country covered. What are the odds wherever you are happens to fall within the tiny spots of areas without coverage? Better than you might think, it turns out, as a recent study conducted by the Federal Communications Commission found that most mobile carriers are greatly exaggerating just how strong their coverage is. Unfortunately, the government agency doesn't seem to have any intention to actually do anything about this issue.

The study looked at more than 10,000 miles of coverage area across 12 states and tested download speeds across the networks of three of the five major carriers — Verizon, T-Mobile, and U.S. Cellular. The findings: Carriers fail to reach the expected download speeds as projected by their coverage maps about 40 percent of the time. U.S. Cellular — a regional carrier with the fifth-most subscribers of any network in the country — fared the worst, achieving expected speeds in just 45% of tests. T-Mobile managed to reach the speeds expected of its network in just 63.2% of tests. Verizon was statistically the best performing of the networks, but it still failed to impress, hitting its expected download speeds just 64.3% of the time. To make matters even worse, there were instances in which testers from the FCC were simply unable to connect to a carrier's 4G LTE network, leaving them with a lesser, slower connection. This occurred in 38% of tests on U.S. Cellular's network, 21.3% of the time for T-Mobile and 16.2% of tests of Verizon's service. These failures regularly occurred within areas that the carriers claimed to cover.

These results probably should not come as much of a surprise. First of all, you probably have a fair amount of anecdotal evidence watching your phone drop bars of service in areas that are supposedly covered to suggest that there's something wrong. But there are also a number of independent studies that have produced similar findings as the FCC. Steel In The Air, an organization that provides insights for cellular tower leasing, found that major carriers including T-Mobile, AT&T, Verizon, and Sprint have claimed to have towers in areas where they don't. Placed on a scale of 0 to 10, both Verizon and AT&T received a score of six when it comes to the accuracy of their coverage maps. The Rural Wireless Association has also dinged carriers in the past for producing misleading or flat out false coverage maps. A 2018 filing made by the organization to the FCC claimed that a "vast majority of test points showed non-qualifying 4G LTE coverage — or no 4G LTE coverage at all,” suggesting that carriers like Verizon and T-Mobile have significantly fudged the numbers on their network capabilities.

That history of alleged false reporting made by carriers matters a great deal at the moment, because the FCC is preparing to offer significant government subsidies to those companies as they work to build out their fifth-generation or 5G networks. Between that and the $4.5 billion made available to extend existing 4G LTE networks to rural areas that are currently not covered, there is a lot of money on the line that the government should want to ensure is going toward actually building these important tools for communication. Despite that, the FCC — which is headed by Ajit Pai, a former lobbyist for Verizon — has no plans to take action against carriers who have lied about their maps.

There's certainly no lack of pressure to actually do something about the problem. Lawmakers have pushed for more clarity on coverage maps, with Montana Sen. Jon Tester (D) going so far as to say that the FCC's own maps "stick" and "we've got to kick somebody's ass" to fix the problem. Telecommunication companies have lobbied hard against efforts that would improve the accuracy of these maps and focus on highlighting areas where there is a lack of competition.

As long as industry pal Pai remains at the head of the FCC, it seems unlikely that any meaningful improvements will be made. Companies will continue to self-report inaccurate maps while facing little to no penalty for doing so because the agency that would typically penalize them is toothless and industry-friendly. It doesn't help that there is so little competition available that there is no company that can upend the industry and challenge these companies and their apparently false claims.