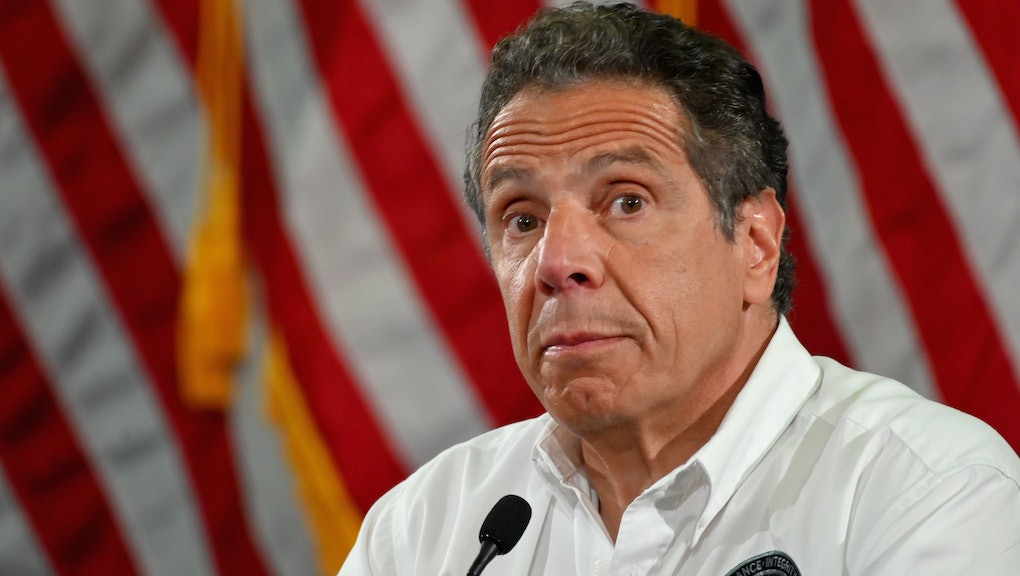 "Fear is a virus also": Cuomo is publishing a coronavirus memoir whether you like it or not

Andrew Cuomo stans nearly lost it when the New York Governor ceased his daily coronavirus briefings in mid-June. Where would they turn for reliable health information and top-notch powerpoint slides? Certainly not to the sitting POTUS, whose dispatches regarding covid-19 have been scattershot and riddled with conspiracy theories. Well, this October, Governor Cuomo is releasing a memoir, titled American Crisis, looking back on his experience so far managing the coronavirus pandemic in New York.

It's a curious decision considering how decidedly not out of the woods we are in this pandemic, but the move isn't entirely unexpected in a year chock full of blindly ambitious politicians putting their personal brands ahead of public safety.

In addition to examining how New York went from a covid-19 epicenter to a place with one of the lowest rates of infection in the country, the book will offer leadership advice and detail Cuomo’s interactions with the Trump administration. American Crisis is slated to hit shelves on October 13, three weeks before the general election, and there will surely be some salacious details about his dealings with the 45th president. On the first night of the Democratic National Convention, Cuomo called the spread of the virus a metaphor for a country weakened by division.

The Governor shared an excerpt of American Crisis with the Associated Press, emphasizing how he confronted fear in the face of a deadly virus:

“The questions are what do you do with the fear and would you succumb to it. I would not allow the fear to control me. The fear kept my adrenaline high and that was a positive. But I would not let the fear be a negative, and I would not spread it. Fear is a virus also.”

While the public health crisis significantly boosted Cuomo’s approval ratings, his handling of the pandemic is not without criticism. Trump has blamed New York’s tens of thousands of covid-19 fatalities on Cuomo’s “poor management.” The governor has drawn harsh criticism from within his party for underreporting virus-related deaths at New York nursing homes. Questions about his decision to force nursing homes to accept patients with COVID have been met with cries of politicization, not exactly great leadership qualities.

But you know what else is politically motivated? Releasing a scathing memoir on the eve of a tense election.

More like this
Did Ta-Nehisi Coates troll Jordan Peterson in his 'Captain America' comic?
By Kara Weisenstein
Queen Rihanna marched with the people against Asian hate this weekend
By Kara Weisenstein
Pfizer's CEO just admitted we'll all probably have to get a 3rd coronavirus shot
By Rafi Schwartz
Stay up to date