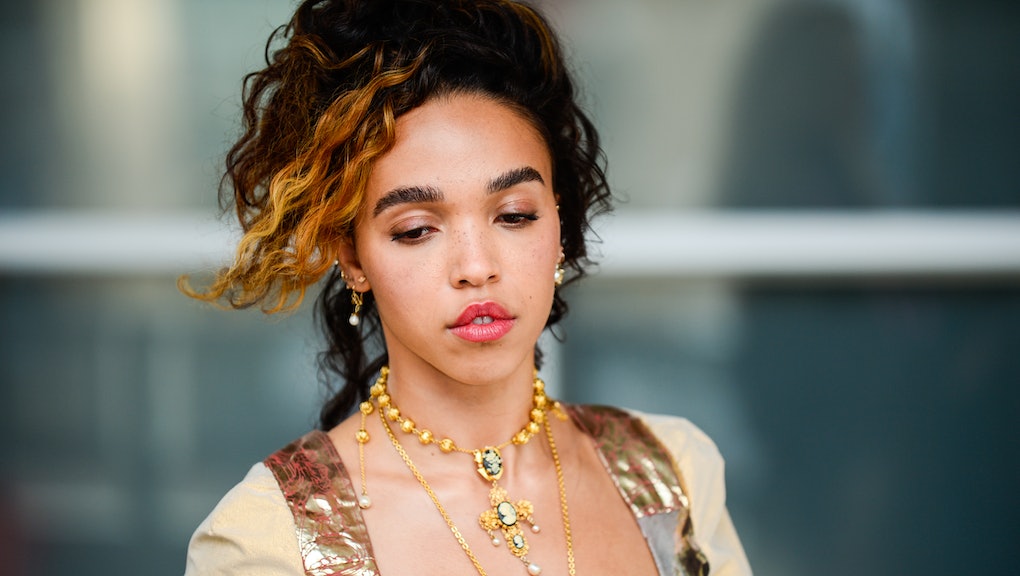 We’re getting a clearer picture of the cruel tactics Shia LaBeouf allegedly used to abuse FKA twigs during their relationship of nearly a year. The reported details of LaBeouf's violence and manipulation are harrowing, and it can’t be easy for the twigs to recount such raw trauma. “It’s hard to do this publicly,” the singer told Elle in the magazine’s March cover story. But she’s speaking up in hopes of helping other women recognize domestic violence and leave abusive relationships. “It can happen to anyone,” she said. “It’s pure luck that I’m not in that situation anymore.”

In hindsight, twigs — who met LaBeouf in 2018 on the set of Honey Boy, LaBeouf’s semi-autobiographical film about his own childhood trauma — said there were red flags early on in their relationship. “A lot of the tactics the abuser will use are things that if I would’ve known, I could have spotted in the first month of my relationship,” twigs told Elle.

For example, she said LaBeouf mounted a “charm offensive” and told twigs he “loved her” just a week or two into their relationship. According to twigs, he hopped the fence of her London home to leave her flowers and love notes. “He would send me between 10 and 20 bunches of flowers a day for 10 days. … On the tag, each time, it would say, ‘More love,’ ‘More love,’ ‘More love,’” twigs told Elle. “I look back now, and it feels like really aggressive love.”

Per Elle, LaBeouf was engineering a "cycle of attachment," building twigs up by showering her with affection only to knock her down with abuse. The singer likened herself to a frog that doesn't know it's slowly being boiled to death until it's too late.

In a separate interview with CBS This Morning's Gayle King, twigs said, “It's not one thing. It's loads of tiny, little things that get sewn together into a nightmare.”

Twigs told Elle that LaBeouf asked her to move into his Los Angeles house in October 2018, and the abuse escalated. For example, she said he would wake her up in the middle of the nigh and accuse her of plotting to leave him or masturbating, allegedly calling her “disgusting” and “a vile woman.” Twigs said he forced her to sleep naked, no matter how cold it was and accused her of withholding her body from him when she objected. She said LaBeouf also made her watch true-crime documentaries that depicted grisly violence against women. “I would say to him, ‘I really don’t want to watch stuff like this before I go to bed. I’m sensitive, it affects me,’” the singer said.

LaBeouf also allegedly kept a gun next to their bed, which terrified twigs, who never knew what might set him off. She said was scared to use the bathroom in the middle of the night, because she feared he would think she was an intruder and shoot her. She took a picture of the gun and sent it to her manager, as precautionary evidence. “I thought to myself, ‘If he shoots me, and then if there is some sort of investigation, they will put the pieces together. I need to leave little clues,’” she said.

Twigs said LaBeouf also bragged about shooting stray dogs to "get into character" for the 2020 film, The Tax Collector. When she questioned this, twigs said LaBeouf accused her of "not supporting" him in his "art."

Twigs's explosive lawsuit against LaBeouf, filed in December 2020, revealed harrowing details of a 2019 Valentine’s Day vacation-turned-nightmare, when the actor allegedly choked her repeatedly and threatened to crash his car with her inside. In the new interview, twigs told Elle that she tried to leave after that encounter, but LaBeouf drew her back in. Eventually, twigs's Magdalene world tour, which began in May 2019, made it possible for the singer to escape her abuser.

“I’ve given [LaBeouf] back his dysfunction now. I went on my whole Magdalene tour holding that dysfunction — it was with me onstage, every time I did an interview, on every red carpet," twigs told Elle. "I was not enjoying any of it. Because I was still holding it. But now I’ve given it back. Now he gets to hold it. And everyone knows what he’s done.”