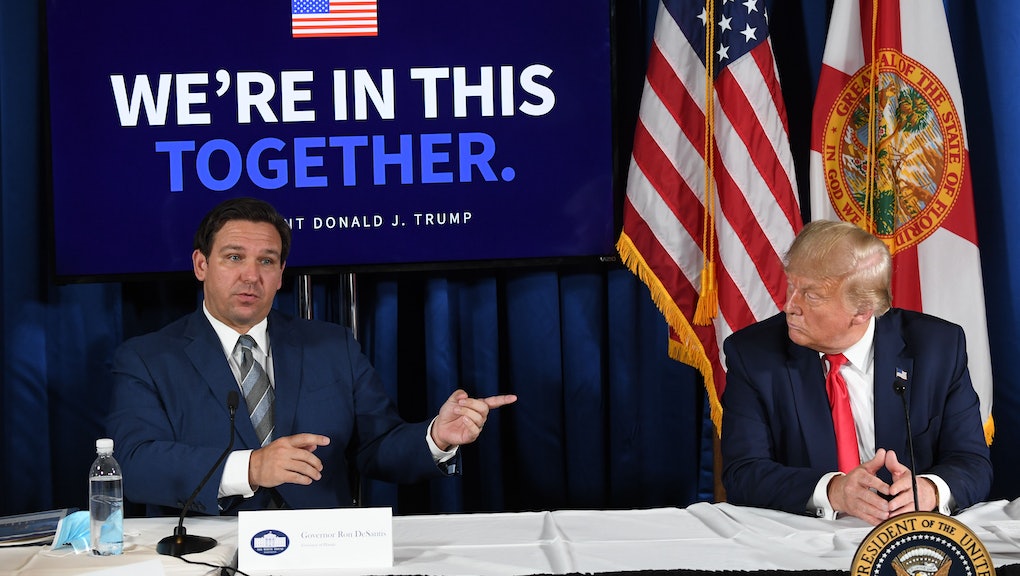 Florida is still reeling from the Miami condo collapse. Trump wants to hold a rally there anyway

This week, that dynamic entered "unstoppable force, immovable object" territory, with a rare schism between DeSantis — fiercely jockeying to fill the former president's lifted loafers — and Trump, the de facto GOP kingmaker through whom all conservative political futures must flow.

According to Florida Republicans who spoke with the conservative Washington Examiner this week, DeSantis has "made a direct plea" to Trump, asking him to maybe just maybe think about perhaps holding off on the MAGA rally the former president has scheduled for this coming weekend in Sarasota, Florida, on account of the fact that his state is still absolutely reeling from the the Miami building collapse that has become one of the worst infrastructure disasters in the country's history.

Unsurprisingly, Trump — a man with a pathological craving for the semi-coherent adulation of a live crowd — has instead chosen to plow ahead with his upcoming rally, national tragedy be damned!

"The governor is getting tested here as to how far he's going to be pushed before he breaks ranks with President Trump. And he has to be very careful because this is Trump country," the GOP operative who spoke with the Examiner explained. "The base loves the president. But they equally love Ron. It's a showdown going on right now."

Of course, it's entirely possible that Trump — in a rare moment of egoless self reflection — could muster something approximating solemnity and use his upcoming Florida rally as an opportunity for some much-needed cathartic collective mourning. Right? After all, MAGA rallies have always been such dignified affairs, haven't they?

Ha ha ha. No. He's gonna get on stage Saturday night and dry hump a flag while thousands of bigots demand Hillary Clinton be locked up for reasons beyond the capacity of their limited memory. He's gonna talk about which Democrats are fat, and how he's got a great brain, and why it takes 15 flushes to clear his toilet bowl. It would be awful even if Florida hadn't gone through one of its worst tragedies in recent years. That Trump is absolutely committed to his patriotic pity party now, this week, in that state, is just the crappy icing on an already garbage cake.

The only thing more depressing than this is that no matter how much DeSantis feigns indignity at Trump's decision to hold a big ol' hootenanny while rescue crews are still digging bodies out of the rubble is the fact that in a few months, when he inevitably announces he's running to replace Trump as the next GOP president, he'll still kiss the ring all the same.