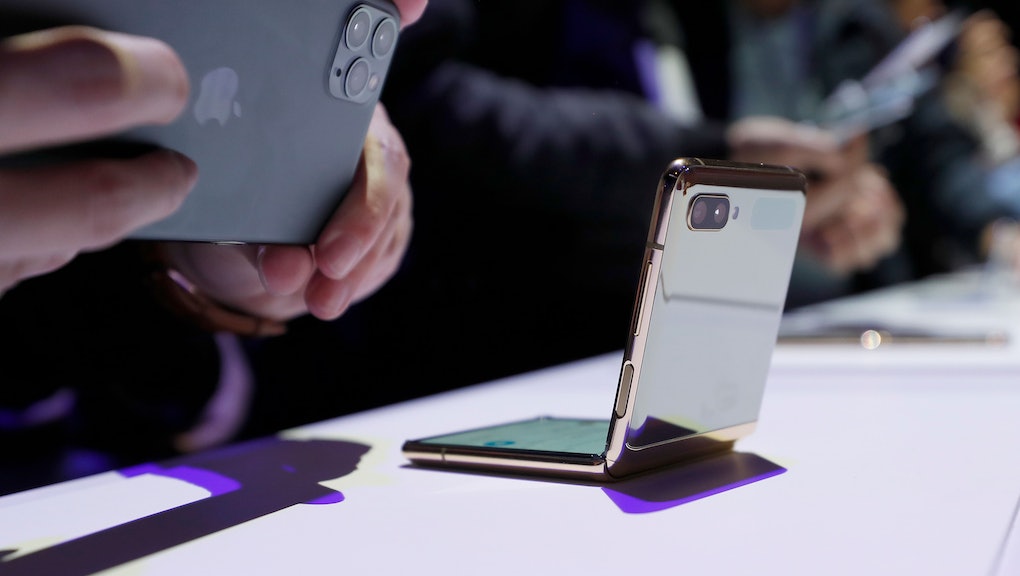 Folding, flip smartphones are the next big thing, but does anyone really want one?

Over the past few years, smartphone manufacturers have clearly struggled with finding something new to get buyers excited about plunking down hundreds of dollars for. When handsets typically only deliver bigger screens, better battery life, or even triple the amount of cameras (looking at you, Apple), it feels as though the market is stagnating. It's not as if we don't want these niceties, especially better battery life, but where do manufacturers go from here? It would seem tech giants like Samsung and Motorola are both banking on our nostalgia for the folding flip phones so many of us relied on across the late '90s and early 2000s.

Nostalgia is a powerful drug, after all, and tapping into its power means harnessing it to push smartphone units. What better way to move forward when it comes to new tech than to go backward? But when it comes to folding tech, is it really something we want or need?

We have apparently arrived at foldable tech as an alternative to the innovations most of us actually want. There are several folding phones headed to the market right now, such as Lenovo's $1,500 Motorola Razr, for example, and Samsung's $1,300 Galaxy Z Flip.

The Razr has been courting several decidedly awful reviews, as the Verizon-exclusive phone features a "creaky, unsatisfying hinge;" battery life that's, frankly, dwarfed by other models on the market; and a plastic screen that makes for the odd feeling of dips and bumps throughout the phone's surface when it's laid out flat. But hey, at least it folds and unfolds — until it doesn't.

On the other end of the spectrum, Samsung's Galaxy Z Flip has received mostly positive reviews, thanks to its overall better build quality with folding glass display (not plastic) and and compact wedge shape, which does feel like an interesting form factor for a smartphone, especially given that it features a 6.7-inch screen to begin with.

But, like the new Razr, it also features a crease in the middle where it folds, wherein lies its weakness: the fold could be the very thing that eventually undoes the entire device. And yes, even though you don't actually see the crease when the Razr is unfolded, it's still there. It could fail at any time. And when it does, you may as well toss it in the trash and pick up a regular, non-folding phone that you'll never have to worry about how many times it's supposed to be able to fold without issue over its lifetime.

It's easy to see the allure of folding tech when you look past its problems. The idea of being able to fold a smartphone screen like we've seen with these new models is intriguing, to say the least. It feels like progress, but in a way that makes sense. Users can't see a new processor or the tech that goes into galvanizing screens or battery life. But a folding screen? It looks cool, and it does something we haven't seen much of before. And for many buyers, that's all they really need to know.

Folding tech isn't limited to smartphones, either. There's a push for the form factor to come to larger devices, such as laptops with flexible screens (since they already fold) and eventually TVs in the future, if things work out the way tech companies plan for it. They will all rely on the added hinge, however, the same design aspect that could potentially always pose a flaw, like the ones seen in the Samsung and Motorola phones. The hinge essentially adds yet another component to an already fragile device that could simply break — and this time, it would be an even more expensive fix than a cracked flatscreen or a keypad that wouldn't dial correctly from yesteryear. The entire folding phone would be in disarray.

Beyond the flaws inherent with the way current folding phones are designed, however, is another frustrating prospect: their price. The aforementioned folding Samsung and Motorola phones are already priced higher than their premium "flat" smartphone colleagues. They typically range anywhere from around $1,300 to $2,500, depending on the manufacturer you choose. Unfortunately, this price doesn't ensure you're paying for a great chip or even 5G connectivity: you're essentially paying for the fold. When you can pick up a great mid-tier smartphone with even half the specs some of these folding designs feature for less than a thousand dollars, where does the appeal lie when the phone itself could be rendered useless if bent at the wrong angle or the crease gives out?

At this point in time, foldable display tech feels very much like the beginning of virtual reality gaming, when it debuted in its most rudimentary state. While now we can track complex movements without the need for additional sensors beyond a headset, in the beginning, that sort of support was little more than a far-off dream. Folding tech, as a whole, feels very similar. It's an interesting innovation that does make sense when you analyze its practical applications, but it's still very much mired in its early infancy.

Like VR, foldable tech is likely something that will struggle to catch on while there are still so many potential issues that could occur. When buyers purchase a smartphone, they want to know that they're getting something reliable for their money — it's going to be with them through the good, the bad, the emergencies, and everything in between. They aren't buying in, thousands of dollars deep, for the same kind of "innovation," that they could have gotten with a Nokia flip phone from their high school days. And if people are buying the phones? Well, the tech certainly isn't quite there yet. It likely needs a few years yet before it's in a space where it makes sense to adopt one of these new devices.

Until then, however, you have to keep asking yourself: is folding tech really the next big thing we want or deserve? Is it pushing the core functionality of a smartphone and the many wonderful things it's capable of beyond current limits? For right now, it looks like beyond the initial "ooh" and "ahh" response that your screen can fold, no. It does not seem to be.

But, as with all things, in time that may change. For now, that $1,500 you might spend chasing a new Razr that folds with a plastic screen instead of an aluminum body would be better spent on the latest and greatest iPhone or Android phone so you can worry about getting on with your life and taking care of business — not focusing on how many folds you have left.

More like this
Plastic Free July is the perfect opportunity to kick our pandemic habits
By AJ Dellinger
QAnon queen Marjorie Taylor Greene got suspended from Twitter for spreading coronavirus misinformation
By AJ Dellinger
For a blessed 11 minutes, Jeff Bezos was not on Earth. Here's what he missed
By AJ Dellinger
Stay up to date