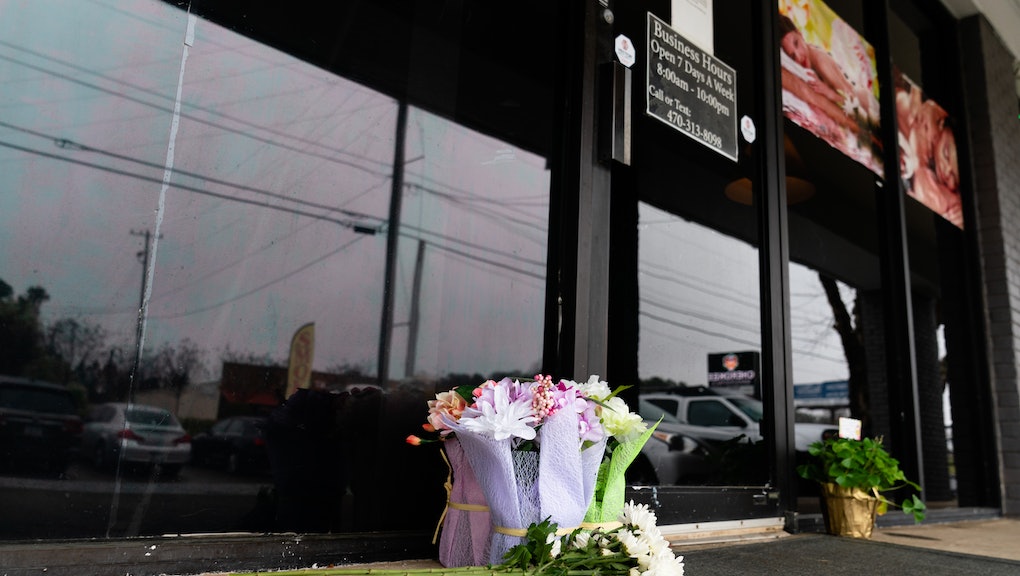 For Asian women, this is what racist, sexist violence looks like

I didn't sleep much last night. Neither did my sisters, I learned when I texted them this morning. I can’t imagine that many other Asian women did, either, after learning that Robert Long allegedly killed eight people at three spas in the Atlanta area last night, including six Asian women. He thought he suffered from a sex addiction. To him, the spas were “a temptation… that he wanted to eliminate,” Cherokee County sheriff's Capt. Jay Baker said at a news conference on Wednesday. This is what anti-Asian violence looks like for Asian women.

After years of believing that the fetishization I’ve experienced “wasn’t that bad,” gaslit by its frequent absence from mainstream conversations about race, the tragedy in Atlanta affirmed what I’ve known for a long time: being an Asian woman is scary. This is nothing new. That Long saw those he killed not as humans with lives and people who loved them, but as “temptations” that needed “eliminating” speaks to a centuries-old intersection of xenophobia and the hypersexualization of Asian women.

The shooting in Atlanta came less than a week after Johan Strydom sexually assaulted a woman, identified only as Tiffany, at a train station in San Jose, California, according to NextShark. “F-u, f-u Asian, this is completely bull,” he said as he attacked her. She’s Filipinx, like me. She took the same route I did when I was still in school.

Strydom reportedly lives with mental illness worsened by homelessness, which speaks to larger systemic issues that deserve their own story. Still, I can’t shake the images of him and Long: two angry men unleashing their wrath on Asian women. They represent the worst-case scenarios of sexualized racism, hovering in the corners of my mind whenever I’m alone in public. Now, I can’t stop thinking about them.

Being a woman is scary, period. But race intersects with gender to make Asian women experience violence in unique, disproportionate ways. Out of 3,800 incidents reported to Stop AAPI Hate, women accounted for 68% of respondents, while men accounted for 29%, NBC Asian America reports. The findings suggest that not only our gender, but our race, makes us targets.

Men often view our race as an invitation to sexualize us. In the U.S., there’s “this long history of the perception of Asian women as being dispensable, as being sexualized, objectified, and weak and powerless,” says Renee Tajima-Peña, a professor of Asian American Studies at UCLA.

I move through the world with a constant awareness of this history. Almost all catcalls men direct at me are racialized: “Ni hao”; “Hey, Little Miss Chop Suey.” They comment on my “exotic” appearance. I worry that avoiding eye contact will play into tropes of Asian women as sexually submissive, that maintaining it will play into tropes of us as fierce and hypersexual.

Initially, such interactions would fill Liwag Dixon with shame, especially having been raised as a Filipinx American, which I can relate to. In our culture, the dalagang Pilipina — demure, chaste, subservient — is the paragon of femininity. “I felt like I had done something wrong or I had somehow done something to attract that sort of attention,” she says. “I didn’t want to talk about it.”

Now, the ongoing objectification of Asian women is colliding with a rise in xenophobia, stoked by Trump during his presidency. “There’s this whole idea right now that Asians are the virus to be stomped out, and it’s a population as a whole that’s despised,” says Tajima-Peña — which could further convince someone like Long to see Asian women as dispensable.

While the intersection of gender and race makes Asian women more susceptible to a specific type of violence, the women killed in Atlanta occupied other intersections that made them even more vulnerable. Tajima-Peña emphasizes, however, that the scant information we have about them at this point limits any assessment of these intersections to speculation.

Still, she believes it’s worth interrogating, “What made these women dispensable in [Long’s] eyes? What attracted him to these massage parlors that are Asian-run in the first place?” It’s possible that the women’s socioeconomic status played a role, she says. Also, “immigrants in general are seen as being vulnerable,” as people who won’t report crimes committed against them to authorities. And if they were sex workers, which isn’t yet clear, they might not have been respected in their own communities, she adds. The continued criminalization of sex work would have stripped them of the rights and legal protections afforded to other types of work.

While the intersection of gender and race makes Asian women more susceptible to a specific type of violence, the women killed in Atlanta occupied other intersections that made them even more vulnerable.

But again, violence against Asian women isn’t new. Rape, after all, is one of the major weapons of war, Tajima-Peña notes. “Even in places where women are not officially on the battlefield,” she says, “they are on the battlefield.” The last four wars between the U.S. and Asia — the Philippine-American War, the Asia-Pacific War, the Korean War, and the Vietnam War — were all fought in Asia. “The general population is targeted and victimized," she points out. An ecosystem would emerge, with women becoming part of the economy of sex work.

We also can’t ignore the ways in which colonialism stripped women of power, Liwag Dixon says. In response to her tweet related to the violence in Atlanta, someone commented on how the way white men view Asian women is a problem now. “White men colonized my homeland 500 years ago,” Liwag Dixon points out. “This has been happening.” Many cultures in the Philippines were matriarchal, she says, until the Spaniards arrived. “They were so threatened by it, they instituted this patriarchy,” as well as Catholicism. All of this has contributed to the shame Liwag Dixon and other Filipinx women experience around gendered violence, which has only perpetuated it.

Like Liwag Dixon, I’m glad that everyone's talking about this now, but exasperated that this is what it took for them to finally take us seriously. Besides sadness and rage, I also feel a strange sense of relief, that the threat I perceived whenever I stepped out into the world — that hardened my face, warning others that even though I'm an Asian woman, I was not to be fucked with — was real all along.

More like this
When to educate an ignorant friend — and when to cut them off
By Joseph Lamour
Breaking into the weed industry: A guide from the BIPOC who have done it
By Melissa Pandika
Ancestral healing could be key to decolonizing therapy
By Melissa Pandika
Stay up to date