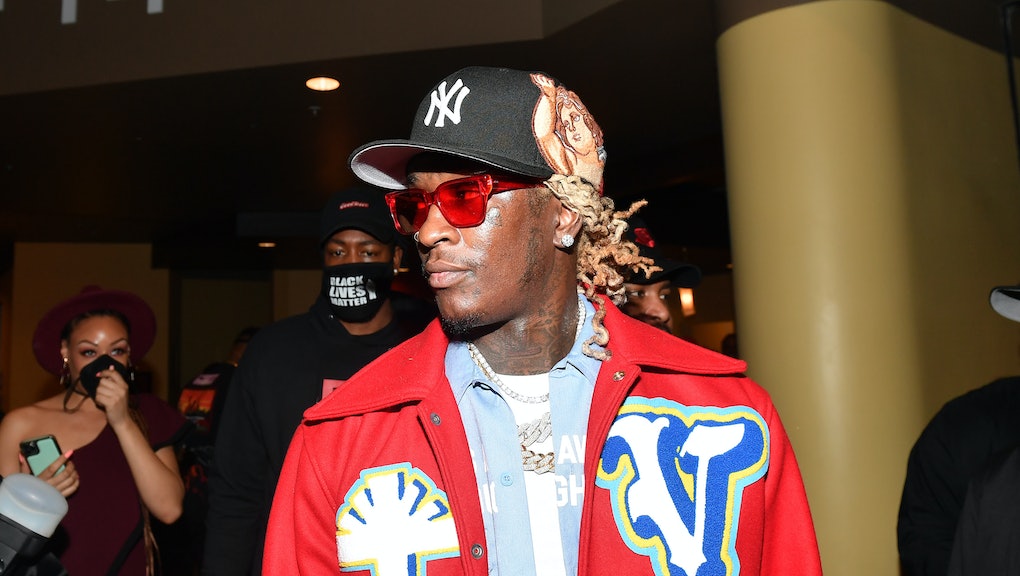 For Young Thug, experimentation is the status quo

Young Thug has gone pink and punk. In an NPR Tiny Desk Concert that was released earlier today, the rapper premiered a handful of new songs — including an electrifying rock-rendition, aided by Travis Barker, of “Ski,” off of his latest posse album, Slime Language 2 — from his new album Punk! The record, as announced on the back of his T-shirt at the end of the performance, arrives October 15.

The new songs, a collection of rock and pop punk-inspired hip-hop that somehow blends effortlessly via the pure elasticity of Thug’s talent, seems to promise an exciting new left turn for rap’s best shapeshifter. This latest sonic adventure is just another in a long list throughout the years from Thug, from the country croons on Beautiful Thugger Girls in 2017 to the persistently chameleonic shades on JEFFERY the year before. This time, though, the shift has arrived with a full-tilt album rollout and an aesthetic of a pink palette and frequent florals, a nice little subversion (or, depending on your definition of the ideals of punk, alignment) with the punk theme.

It seems that Thug has finally been given access to operate at the height of his powers. After years of languishing on the charts, despite being consistently heralded by critics and his fan base alike as a true singularity in hip-hop, it wasn’t until 2019’s So Much Fun that Thug truly, finally, broke through to the mainstream, scoring his first No. 1 album. Pandemic delays aside, it is no coincidence that Punk!, slated to arrive over two years later, is by far the longest wait in between his solo records: after finally achieving definitive commercial success, he can sit still for a moment to determine his next direction.

That time may make room not only for his most refined experimentation, but also the most commercially successful one. The switch-up is not particularly new in hip-hop itself — Lil Wayne, Yasiin Bey, Vic Mensa, and others have also turned toward the genre in the past. But few, if any, have the combination of fearless eccentricity and pure musical intuition to morph the way Thug can. In his hands, experimentation is somehow just the status quo.