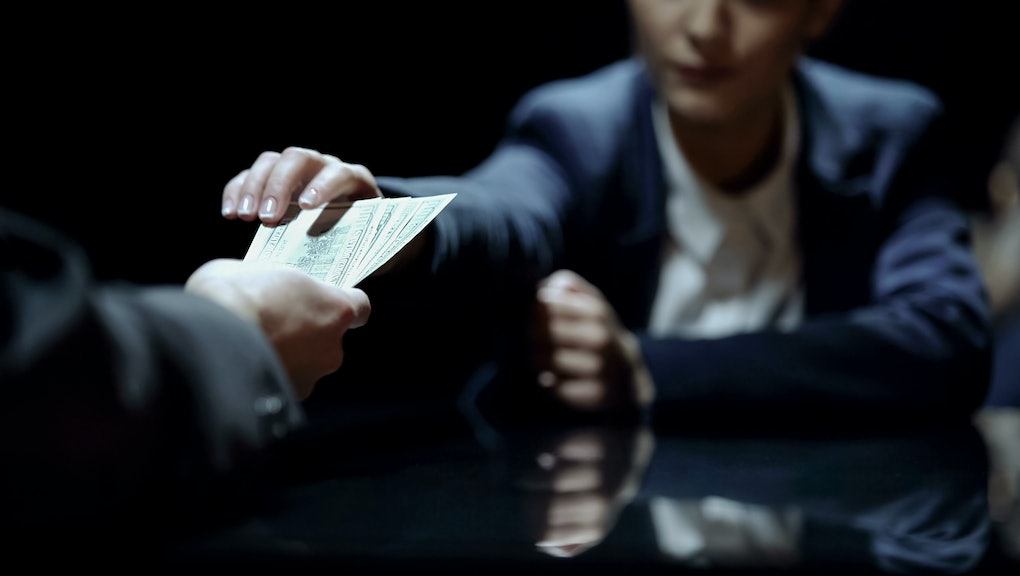 For decades, Big Oil has lined the pockets of politicians with cash in an attempt to purchase influence in Washington. But the fossil fuel industry hasn't just been handing over cash for the campaign and hoping that Senators and members of Congress remember them when it comes time to vote on legislation. According to a new study published this week in the journal Proceedings of the National Academy of Sciences, industry interests have been using positive reinforcement by increasing campaign contributions when legislators vote in their favor.

The study examines 28 years' worth of data, dated between 1990 and 2018, to learn more about the relationships formed between Big Oil and lawmakers in the nation's capital. What it found was a sort of reward program for politicians who cast votes against legislation that would create new environmental protections and potentially hinder the operations of oil and gas companies — or vote in favor of legislation that would deregulate the industry and open up more lands to drilling and exploitation.

This pattern plays out most clearly in 2016 — a year when there were two decidedly different approaches to environmental regulation heading the November ballot and the potential for either party to take control of the House of Representatives and Senate. With a lot on the line, Big Oil ramped up campaign contributions to the tune of $103 million, according to OpenSecrets. But the companies didn't simply hand out the cash indiscriminately to candidates it believed had its interests in mind — instead, it seemed to actively reward those who had already shown loyalty to the oil and gas industry in prior votes. The study found that for every additional 10 percent of votes against environmental rules and regulations cast in 2014, the legislator would receive an additional $5,400 in campaign contributions for the 2016 election cycle. By another measure, researchers found that candidates would receive an additional $1,700 for every 10 percent drop to a legislator's environmental score, as provided by the League of Conservation Voters. Essentially, the more votes a person casts in favor of the industry and against environmental protections, the more cash they would have for their re-election campaign.

While this trend was most clear in 2016, researchers found it to be evident throughout basically every election cycle, as candidates found themselves rewarded for keeping Big Oil's interests in mind while casting their votes. Of course, when these interests give money to candidates, it's not just a reward — they expect continued results. As such, researchers also found that for every $10,000 received by a candidate in contributions, the legislator would be expected to cast anti-environmental votes an additional one percent of the time. The result of this cycle, of course, is producing legislators (particularly Republicans) who vote against the environment at every occasion. According to the League of Conservation Voters' annual scorecard that tracks votes on environmental issues, 77 Republican members of Congress received a zero percent score — meaning they did not cast a single vote for environmental protections during their most recent term. In the Senate, seven Republicans managed to post that perfect score by Big Oil standards. It's not hard to see the contributions pile up for these legislators.

To see this play out, take Steve Scalise, a Republican Congressman representing Louisiana. He's been in Congress since 2008, during which he has racked up a score of just three percent pro-environment votes, according to the League of Conservation Voters. During his time in Congress, he's accepted more than $1.5 million from oil and gas interests — his biggest industry contributor. While he has never been a conservationist with his voting tendencies, his votes have become more consistently anti-environment throughout his stay in Congress. The oil and gas industry was not one of his top three contributors during his initial run for office, according to data from OpenSecrets. From 2010 to 2012, he cast eight votes in favor of environmental protections — good for a 10 percent approval rating on these issues. Then Big Oil money started pouring in. He cast just one such vote in his 2014-2016 term. From 2016 to 2018, he hasn't managed to muster a single vote that would go against Big Oil's interests — dropping him to a 0 percent score during that time and a lifetime score of just three percent. Not surprisingly, contributions from the gas and oil industry increased for Scalise every campaign cycle, jumping from $65,400 in 2008 to $324,270 in 2018. There are assuredly numerous reasons for Scalise's votes, including a genuine belief that it's more important to free up the industry than to protect the environment, but he has been rewarded by Big Oil regardless of the intent.

It's an unfortunate fact that money in politics have a real effect on how legislators vote. Money is required to win elections — and in the case of Big Oil, favorable votes are required to get that money. Democratic Presidential candidates including Senators Bernie Sanders and Elizabeth Warren have pledged not to accept a single dollar from the oil and gas industry and more Democrats are distancing themselves from the interests of Big Oil. The same cannot be said for Republicans, who seem more than willing to continue to reap the rewards of voting for oil and gas interests while ignoring the environmental consequences of those votes.