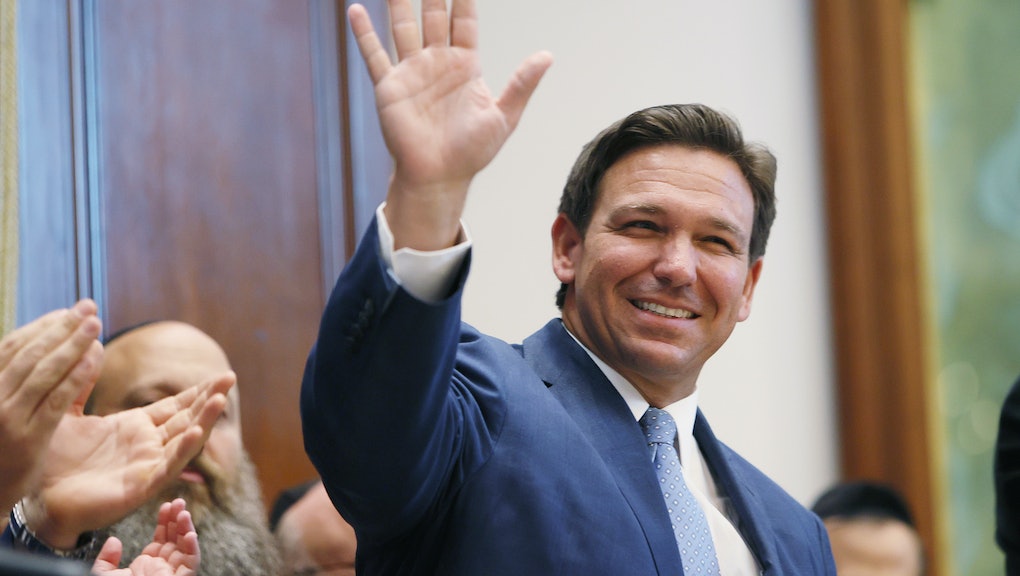 Florida's Republican Gov. Ron DeSantis is less a functional politician these days than he is a walking, talking COVID vector, a human-shaped coronavirus enabler moonlighting as the freedom-loving chief executive of a major state. For many of the citizens of Florida — particularly those at risk of, or already dead from, the ongoing surge of the highly infectious Delta variant — this is not a good thing.

For the bookers at Fox News, however, it makes DeSantis an irresistible face to slap across TV screens around the country. So much so, in fact, that according to a tranche of emails obtained this week by the Tampa Bay Times, DeSantis was courted to appear on the country's top conservative propaganda outfit almost daily between election week 2020 and February 2021. At times, per the paper's reporting, he's even been given free rein to choose the topics of conversation for his appearances and collaborated with the network on everything from questions to formats to graphics.

In part, the push to make DeSantis the GOP's shiny-faced poster boy is a byproduct of former President Donald Trump's relative seclusion since leaving office in January. Fox News, like nature (the ecological system, not the network), abhors a vacuum, and absent Trump to drive coverage, DeSantis has come to fill the void.

"He's been given the first Fox audition for 2024, which also means he gets to set the bar," Republican communications expert Adam Goodman explained to the Tampa Bay Times. "That means all the other competitors, when they have their chance to have their day on Fox, there's a measuring stick that they're going to be up against, and that’s the governor of Florida."

And DeSantis-the-measuring-stick is a long one. Per the Times:

In the first six months of 2021, DeSantis had scheduled as many appearances with top Fox hosts Hannity (8 times), Tucker Carlson (6), and Laura Ingraham (7) as he had meetings with his lieutenant governor, Jeanette Nuñez (7), according to his public calendar.

He has, in return, repaid the favor to his patron media network. In May, DeSantis gave Fox & Friends "exclusive" access to his signing of a new voter suppression law, barring other networks — including local media — from attending the event.

DeSantis's Fox-ified prominence has been both a blessing and a curse for the man seen by many within the party as the future of the post-Trump GOP. While his star (and polling numbers) may have risen, so too has the number of targets on his back — particularly as he's bungled his way through the coronavirus pandemic. As State Agricultural Commissioner and Democratic gubernatorial candidate Nikki Fried noted on Twitter:

And already, DeSantis's Fox-assisted national profile has led him to begin popping up in campaign ads from Democrats running in entirely different states, such as Virginia Gov. Terry McAuliffe's just-released "Don't Florida Our Virginia" spot:

In a statement to the Tampa Bay Times about DeSantis's Fox-centric media push, a spokesperson for the governor defended DeSantis, saying that "while other networks were busy lauding states whose governors have either retired in disgrace or are undergoing a recall, Fox News was willing to hear our perspective and report the facts."

Perhaps — although I suspect it would be much more accurate if the word "facts" was replaced with a second use of "perspective."