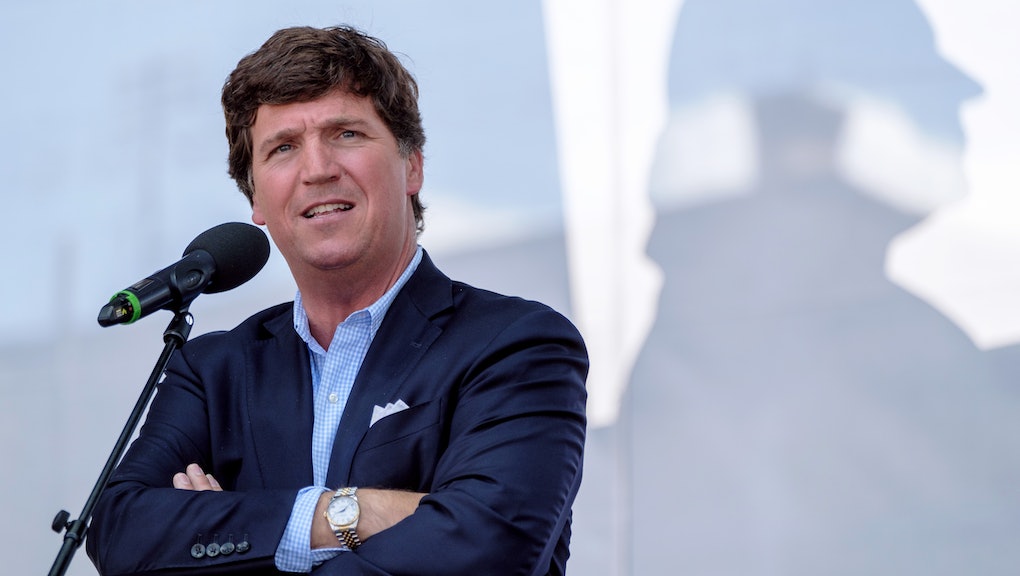 This weekend, people around the world watched with horror as the Taliban swiftly advanced across Afghanistan. Following the capture of three provincial capital cities and the siege of Kabul, the national capital, many are desperate to leave the country. Which begs the question: Where will they go? Of course, Fox News wasted no time in spouting its usual xenophobia in exploring this question, going so far as to claim America will be "invaded" by Afghan refugees.

On Monday night, Fox News host Tucker Carlson made a few questionable claims during his primetime show. Carlson, a big fan of the white supremacist "Great Replacement" theory, started off by telling viewers that the United States lost Afghanistan because of "radical gender politics."

"It caused revolts, but officials kept doing it, they kept pushing radical gender politics anyway, because they could, because they were in charge of these Stone Age people they were going to educate. This is the face of the late American empire, gender studies seminars at gunpoint," Carlson said.

He went on to add, "It turns out that the people of Afghanistan don’t actually want gender studies symposia. They didn't actually buy the idea that men can become pregnant. They thought that was ridiculous."

If that wasn't enough, Carlson also went off about bipartisan calls for President Biden to provide refugee status to Afghans. "We will see many refugees from Afghanistan resettle in our country in coming months, probably in your neighborhood," Tucker said. "And over the next decade, that number may swell to the millions. So first we invade, and then we're invaded. It is always the same."

Lara Ingraham, another Fox News host, also added her unnecessary two cents. She told viewers, "Is it really our responsibility to welcome thousands of potentially unvetted refugees from Afghanistan? All day, we've heard phrases like, 'We've promised them.' Well, who did? Did you?"

Listen, there's a lot to unpack with both of these two. But let's focus in on Ingraham's question: Is it really the U.S.'s responsibility to welcome refugees from Afghanistan? Uh, yes.

There is absolutely no way to deny that the U.S. has played a central role in the collapse of Afghanistan's government today. While people fight over whether Democrats or Republicans are most to blame, it doesn't really matter. At the end of the day, the U.S. helped set the stage for the Taliban's rise in the 1990s, after it funded insurgency groups in Afghanistan to fight the Soviet Union's occupation.

Now, let's be clear: The U.S. didn't back those groups because it has morals and felt occupation is bad. It did so because of red-scare politics. When the U.S. itself invaded Afghanistan in 2001 — only 12 years after the Soviet Union left — it did so under the guise of restoring "democracy." Per the Watson Institute's "Cost of War," over 71,000 Afghan and Pakistani civilians died as a direct result of the war.

The U.S. has a long history of messing up other countries. War is profitable, folks, and there's nothing that capitalist machines love more than money. But when you destabilize countries, the people who live there will need somewhere to go.

What's most important in all of this are the actual demands of Afghan people. And currently, Afghan-led organizations in the U.S. are calling for the federal government to remove any quota limits to assist vulnerable people.

"The United States furthermore has a responsibility to provide a safe haven for refugees created by this conflict, as one of the main drivers of the conflict," Afghans For a Better Tomorrow wrote in their petition. "After pursuing 20 years of failed policies that have harmed Afghans, the very least the United States can do is provide refuge for those seeking it as the Taliban aims to take the country by force, repressing vulnerable Afghans."

It's hard to say exactly how many people will need to seek refuge. The Hill reported that previously, the federal government said it would help over 80,000 Afghans who qualified for Special Immigrant Visas, such as people who worked with the U.S. to aid the military effort. So far, Biden has allocated $500 million in extra funding to help relocate Afghan refugees. In addition, Uganda agreed to temporarily take in 2,000 refugees following a request from the U.S.

Really, though, all of these conversations about numbers get tiring. Too often in politics, we get caught up in abstracts and numbers to distract ourselves from the real conversation. The nitty-gritty of policy doesn't matter that much. It's fake. You can edit policy, delete it, ignore it if enough people decide to. Afghan people, however, are not fake. Reducing refugees to just numbers makes it easier to forget that.