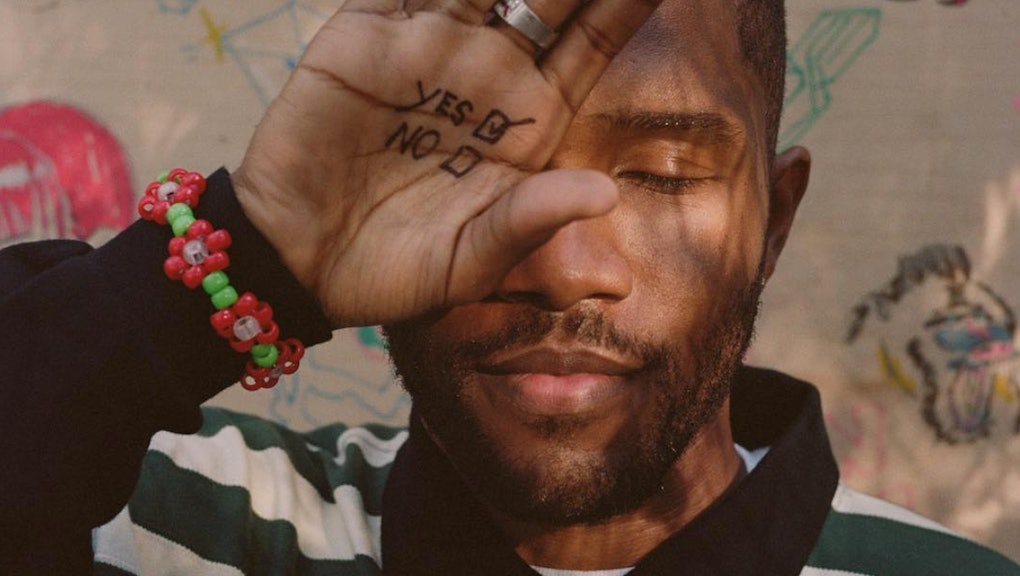 Frank Ocean, king of silence, said a lot this week

Frank Ocean loves to be mysterious. So we're better off not asking why, this week, he chose to be as visible as he's ever been all year.

On Monday, W ran an interview painting Ocean as a sort of James Bond-type. It’s peppered with details like the fact that he turned up for the interview on his bright green sport bike, which he’d just rode to the Lower East Side for a vegan cubano. Or the fact that he’s working on completing four underwater laps in the pool at his house in Manhattan.

Also this week, A24 released a trio of books commemorating three of the studio’s most celebrated releases — Ex Machina, The Witch, and Moonlight, Barry Jenkins’ 2016 Academy Award Winner for Best Picture. The Moonlight edition contains an essay by Pulitzer Prize-winning critic Hilton Als, plus a gorgeous stream-of-consciousness foreward by Ocean. “In the southeast, in our youth I saw streetlights and taillights and lighters light spoons and guns alight but there was no moonlight,” it begins.

It’s a moving reflection on Ocean’s adolescence in New Orleans, one that seems to echo the storyline of Moonlight, which he elaborates on in W. In that same interview, Ocean argued against the expectation for creatives to bear their souls in their art. “If I start to tell a story and then I decide not to tell the story anymore, I can stop. It’s my story. [...] I’m more interested in lies than that. Like, give me a full motion-picture fantasy,” he said.

“So you mean a fantasy, not a lie,” reporter Diane Solway clarified.

“A fantasy could be hopeful.”

“Some people have dark fantasies,” the singer said, laughing.

Here are some of the other gems from W’s wide-ranging interview with the enigmatic Ocean.

For marginalized people, there can be power in doing nothing.

“The stakes are high. I would replace the word ‘responsibility’ with ‘opportunity’ when it comes to voting, because you have the right to do nothing, but you have an opportunity to do so much more. It’s simple to go vote; it’s complicated to galvanize votes.”

He has great credit, apparently.

He doesn’t trust the cloud.

“I’m working with a string arranger right now in Rio, and every time we go back and forth, because I don’t put things on the Internet, I have to send a drive with someone to Rio, or I have to go myself.”

He’d like more artists to think outside the music industry box.

“Technology for a long time has dictated what the format is, and as punk as we want to be, we’re all kind of existing as recording artists inside of a technology, whether it’s the software we record and edit our music on, or whether it’s the medium that we press our music to distribute it. [...] That’s really an arbitrary limitation. That’s not state-of-the-art. I hear rappers talk about their business savvy and their ­independence in songs. And I think the more of that, the better.”

“I remember doing the ‘Raf’ verses [on A$AP Rocky’s 2017 song ‘Raf’], and at the time I was practicing rap, practicing structuring verses, practicing flow, trying to get better at doing it. [...] So I jump in the studio and I’m putting the verse down, just quick, you know, sorted it out, went by Rocky’s house and played him the song. I could tell he was very animated about it, and then he said, ‘Man, you rappin’ like it’s 2003.’ And I was just like, ‘Oh, shit!’ [...] I thought, All right, we want the bouncy today thing. Let me riff on that idea. And so I wrote that verse, and I sent it to him. And I told him, ‘Tell me, what year are we now?’”

“House of LaBeija came to my 30th birthday party in L.A. and shut it down. I did runway.”

He went to Marc Jacobs’ wedding.

“[It was] at the Seagram Building, which Mies van der Rohe designed. The bar’s on the higher level and the Pool is on the lower level. At a certain point in the night, everybody was moving closer to the DJ and nobody was down by the Pool, and my friends and I were doing, like, death drops because it was carpeted, so I could practice, which was amazing.”

“I’d been wearing a similar thing every day for a while. I was feeling how Keanu Reeves looked in The Devil’s Advocate. He would wear a sports coat and tie with a button-collar Oxford sort of deal—the best hair, and the light-wash denims, and the belt that matched the shoes.”

And he stans Joan Rivers.

“Rest in peace. My legend.”