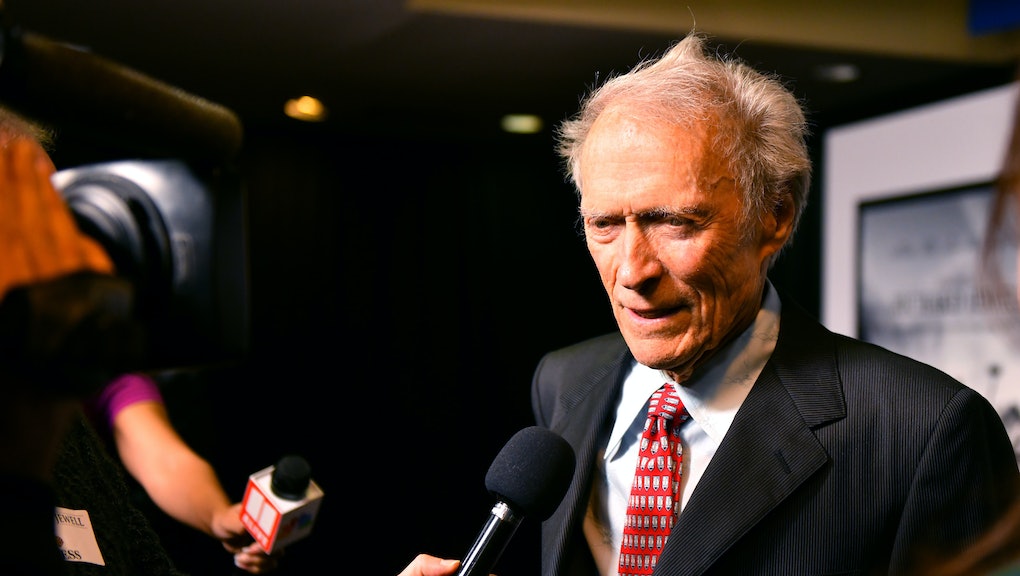 From 'Gran Torino' to 'Richard Jewell': A decade of Clint Eastwood's most bigoted movies

Clint Eastwood is in hot water over his new film Richard Jewell, out Friday. It tells the true story of security guard Richard Jewell, who alerted police to a bomb-filled backpack at the 1996 Summer Olympics in Atlanta and was lauded a hero — until the FBI wrongfully suspected him of planting the explosives himself. The Atlanta Journal-Constitution reported on the investigation, naming the FBI’s suspect, and Jewell was publicly condemned for a crime he didn’t commit.

Eastwood took some artistic liberties with his movie, namely by filling in a pivotal gap in the plot: what would convince an FBI source to disclose a suspect’s identity to a female journalist? The answer, in Eastwood’s imagination, is that Scruggs traded sex for the scoop.

The way the scene plays in the movie is quite lazy. Scruggs, played by Olivia Wilde, meets the FBI agent leading the investigation into the bombing, played by Jon Hamm, at a bar. She wants information. She heard the FBI has a lead on the bomber and wants his name. Hamm rebuffs her with a boorish proposal: “You couldn’t fuck it out of them, what makes you think you could fuck it out of me?” Then Scruggs runs a hand up his leg, and he tells her Jewell’s name. Scruggs asks if they should go to her car or a motel, and they exit together.

The Journal-Constitution is rightfully outraged by the misogynist depiction of its reporter in the film. Scruggs died in 2001, but those who knew her said she never would have traded sex for information. The FBI concocted its own narrative about Jewell and his capacity for evil, but the movie about him displays a spectacular lack of imagination in regards to how his name entered public discourse.

Eastwood has stirred up a lot of controversy in his old age, mostly over his dubious politics. Who can possibly forget his 2012 speech at the Republican National Convention in support of Mitt Romney? The man addressed a chair as though it was Barack Obama and pretended the president was doling out lewd insults about him and Romney. At the end of the speech he declared, “When somebody does not do the job, we’ve got to let them go,” referencing Obama and drawing his finger across his neck. We already know what Republicans would say if the shoe were on the other foot and an actor said the same thing about Trump at a Democratic convention. They’d be vilified like Kathy Griffin.

The actor-director came out as a Trump supporter in 2016 and gave a salty interview to Esquire implying he thought things were better when people could be openly racist. “[Trump] is onto something, because secretly everybody’s getting tired of political correctness, kissing up. [...] We’re really in a pussy generation,” Eastwood said. He defended Trump’s public racism and told voters to “get over it.”

In the same interview, he shed some light on the origins of 2008’s Gran Torino, directed by and starring Eastwood. He plays the film’s protagonist, a bigoted Polish-American man living in Detroit who thwarts a would-be carjacker, then slowly befriends the immigrant teen who tried to steal his Gran Torino.

Eastwood knew it’d be a divisive movie: “Even my associate said, ‘This is a really good script, but it’s politically incorrect.’ And I said, ‘Good. Let me read it tonight.’ The next morning, I came in and I threw it on his desk and I said, ‘We’re starting this immediately,’” he told Esquire. Since its release, Gran Torino has been criticized for perpetuating negative stereotypes of Hmong immigrants.

Eastwood seems drawn to contentious and complicated narratives, but he often tells these stories in a way where his own outdated, white-centric, patriarchal worldview clouds the story. The director maintains that American Sniper, his 2014 biopic about U.S. Navy SEAL Chris Kyle, who served four tours in Iraq and was one of the deadliest sharpshooters in American history, is critical of war and the horrors it inflicts on people at home. And it’s true the film doesn’t paint a rosy picture of Kyle’s post-combat trauma. American Sniper was mostly well-received by critics and nabbed six Academy Award nominations. But at the end of the day, it’s a film that centers on a famous soldier, played by scruffy and beefy Bradley Cooper, who’s famous for how good he is at killing brown people.

Richard Jewell is being accused by some of pushing a Trumpian agenda that’s anti-journalism and anti-FBI. Highlighting this misstep in the bureau’s history questions its competency, in an era when Trump’s attorney general tried dismantling the FBI for opening its 2016 investigation into Trump. I’m not sure the movie veers that far into partisanship. I think Eastwood was drawn to the “question authority” and “don’t trust the government” vibes running through Jewell’s story. It’s too bad he has so little interest in Scruggs, the female supporting character central to the narrative. If he did, Eastwood would’ve looked into the myriad tactics reporters use to get information from sources and not taken the cheap, sexy way out.