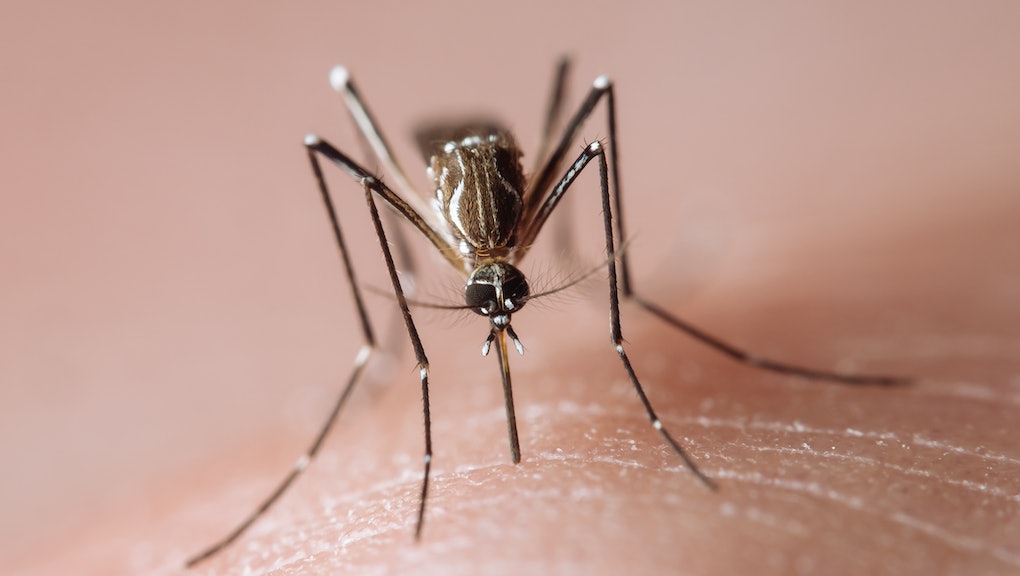 Gene editing could hide us from bloodthirsty mosquitoes

If you’re anything like me, you live for balmy summer nights outside, a tumbler of bourbon or other libation in hand. Alas, this moment of chill often comes at a price: red, swollen, itchy mosquito bites. But a study recently published in the journal Current Biology raises the possibility of essentially making mosquitoes blind to humans. In it, researchers used gene-editing technology to eliminate Aedes aegypti mosquitoes’ ability to see potential hosts, the New York Times reported.

According to the newspaper, Aedes aegypti females, which need to feed on blood to lay their eggs, infect tens of millions of people annually with the viruses responsible for diseases like Zika and yellow fever. To home in on us, they rely on the carbon dioxide we exhale, as well as “organic cues from our skin,” like our stench, Craig Montell a neurobiologist at the University of California, Santa Barbara, and one of the study authors, told the Times. Otherwise, they head to a dark spot, which could indicate the silhouette of a host.

More than 80 years ago, scientists noticed that Aedes aegypti gravitated to people wearing dark clothes, the Times said, but the mechanism underlying this behavior remained murky. Other experiments had shown that mosquitoes released in wind tunnels and exposed to carbon dioxide were more likely to fly to a dark spot than a white one.

Per the Times, Montell and his team had a hunch that using the CRISPR-Cas 9 gene editing method to knock out one of the five light-sensing proteins in Aedes aegypti’s eyes would prevent it from sensing dark colors and therefore targeting human hosts. To test their hypothesis, they first knocked out the most abundant of these proteins, Op1, in mosquito embryos.

When the mosquitoes matured, the Times explained, the researchers exhaled carbon dioxide on them and released them into a makeshift apparatus resembling the wind tunnel used in earlier experiments, which contained a white circle and a black circle. But like their non-mutant counterparts, they flew straight to the black circle. The same thing happened when the scientists knocked out another light-sensing protein, Op2.

When they knocked out both Op1 and Op2, though, the mosquitoes were as likely to fly to the white circles as they were to the black ones, according to the Times, suggesting they could no longer make out the dark-colored silhouettes of hosts. A series of tests showed that these double mutants — that is, mosquitoes with both Op1 and Op2 knocked out — still responded to light, indicating they were blind only to hosts.

If females can’t spot hosts, they wouldn’t find the blood needed to produce their eggs, and “the population would crash,” Montell told the Times. But the newspaper pointed out that the researchers haven’t tested the double mutants’ ability to target real hosts, not just black circles. Neha Thakre, a postdoctoral researcher at the University of California, San Diego, told the Times that she wants to know to what extent this hampered vision translates to mosquitoes’ ability to bite, given that they also rely on other senses to find hosts.

Nonetheless, the study could lay the groundwork for another mosquito control strategy, the Times reported. According to the CDC, genetically modified mosquitoes that pass on genes preventing females from reaching adulthood have already successfully curbed the Aedes aegypti populations in parts of the Cayman Islands, Brazil, Panama, and India. While the current pandemic is already plenty to worry about, the emergence of these approaches is still something we might want to start paying more attention to. As the Times pointed out, climate change could allow Aedes aegypti to foray into new regions — and bring diseases with them.