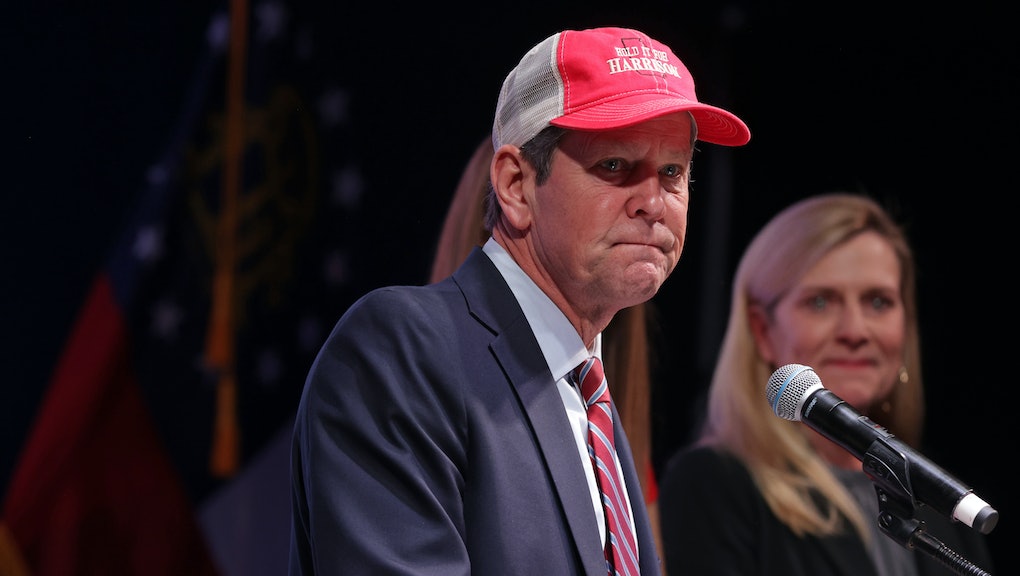 Georgia Gov. Brian Kemp would "absolutely" back Donald Trump in 2024

I wouldn't say I feel sorry for Georgia Republican Gov. Brian Kemp, an arguably terrible man who has had an objectively negative impact on, well, everything. But if there's a way to feel bad for someone without actually, y'know... feeling bad, that's about where I'm at. Because after having spent the past three or so months serving as former President Donald Trump's personal political toilet paper, Kemp is slowly reemerging in the Biden administration era to proudly declare that, yes, he would "absolutely" support the man who mocked, threatened, and humiliated him in a bid to become president again. Hell, Kemp explained, he would even help Trump get there.

Kemp's quintessentially Republican obsequiousness was on full display during a Wednesday evening interview with Fox Business' Neil Cavuto, who pressed the first term governor about whether he would support Trump for a potential comeback in 2024.

"Absolutely," Kemp, who Trump once called a "fool" and a "clown," exclaimed.

"I worked very hard for the president," Kemp continued. "I think his ideas [...] will be part of our party for a long time in the future."

In this, Kemp is undoubtedly and unfortunately, correct; Trump's legacy within the GOP will absolutely be having surfaced, energized, and permanently enshrined the coarse bigotry and authoritarianism that's come to define the MAGAfied party. They're the same characteristics previous generations of Republicans half-heartedly attempted to downplay and couch in the more palatable language of "patriotism" and "traditional values."

It so happens that one of those "traditional values" seems to be the parade of humiliated Republicans who eagerly debase themselves even further by unabashedly craving the taste of Trump's boots. Ted Cruz seemingly got over Trump calling the Texas senator's wife ugly and his dad an accomplice to JFK's murder just in time to ride the rising MAGA wave in 2016; alongside Marco Rubio, whom Trump engaged in a pathetic feud. Just last week, Senate Minority Leader Mitch McConnell said he'd back Trump's theoretical reelection run, mere days after placing the blame for the Jan. 6 insurrection attempt squarely at Trump's feet.

And now the pendulum of shame has swung toward Kemp, who is continuing the Grand Ol' Party tradition of kissing the butt of the man who said he was "ashamed" to have endorsed Kemp in the first place.

"We're not always going to get along, but I think the president deserves a lot of credit," Kemp told Cavuto, practically salivating at the thought of one more taste of the former president's golf shoes. "He's not going away."

Whether Trump ultimately runs in 2024 or not, one way or another Kemp is probably going to be proven right. And hey, if the former president is absent from the next race, it looks like the GOP will happily turn their affections toward Trump Jr. instead.

More like this
Donald Trump, king of scams, says Bitcoin is a scam
By Rafi Schwartz
There are already 19 QAnon candidates running for Congress in 2022
By Rafi Schwartz
Here's a chilling peek into just how close Trump got to running a police state
By Rafi Schwartz
Stay up to date