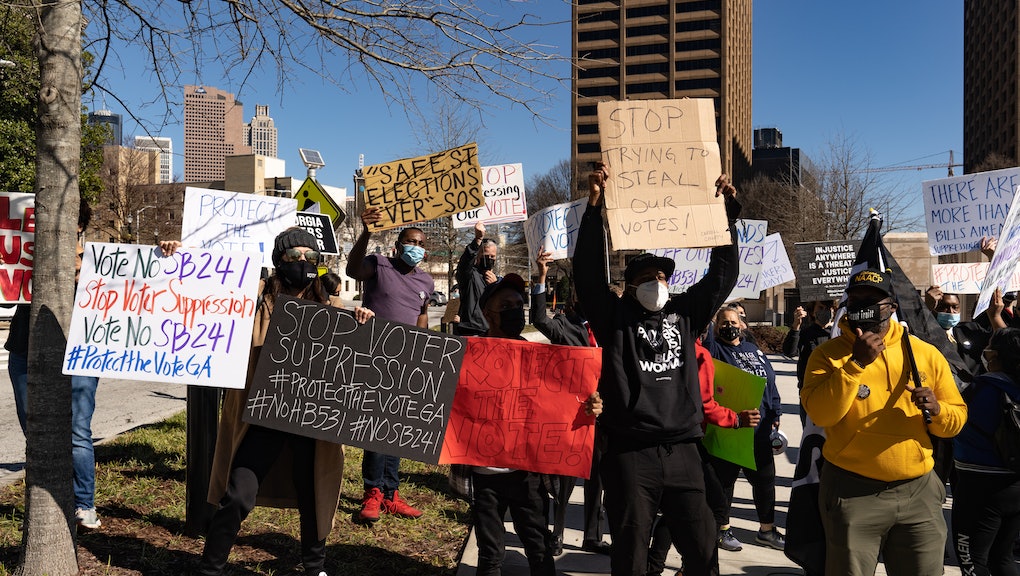 On Thursday night, ensconced behind closed doors, Georgia Gov. Brian Kemp (R) signed a sweeping new slate of deeply restrictive voter suppression laws, heralding a new era in the ongoing fight for fair elections in the Deep South, and the country at large.

The new law, officially called S.B. 202, grants the state power over county elections, requires picture IDs for mail-in votes, limits voting times, and even criminalizes bringing food and water to people waiting in line to cast their ballots. It comes after former President Donald Trump and his supporters worked for months to overturn — and finally, simply denigrate — Georgia's election process, after Joe Biden ultimately won the state in the 2020 presidential election.

"It's like the Christmas tree of goodies for voter suppression," Democratic state Sen. Jen Jordan exclaimed during the lead up to Thursday evening's vote. State Democratic Chair Rep. Nikema Williams described the new law — whose cumulative effect will likely disproportionately affect voters of color — as "flagrantly racist" and "a slap in the face to Georgia’s civil rights legacy." It's a charge sharpened by a pair of simultaneous metaphors for just what it means for a state with Georgia's history of racist oppression to once again restrict who can vote and when.

First, as author and columnist Will Bunch explained in an extended Twitter thread on Friday morning, Kemp's bill signing ceremony — held out of sight from the public (more on that in a bit) — conspicuously took place under a lush painting of Callaway Plantation, currently "a 56-acre historic restoration project [which] offers a glimpse into the bygone era of working plantations in the agricultural South." As Bunch notes, that "bygone era" was one which, by the time the Civil War rolled around, featured more than 100 slaves on site, all kept under brutal conditions including a separate house used to punish "unruly" slaves, which became known as the "Willis Jail."

Whether the decision to hold Kemp's bill signing under a gauzy homage to Georgia's history of chattel slavery was intentional or not, its hard to separate the state's long legacy of Deep South racism from this latest restrictive effort to prevent huge swaths of the population — largely people of color — from exercising their democratic right to vote.

Which brings me to the second horrific metaphor, which played out at the exact same moment as Kemp was busy posing for his triumphant Twitter photo: the arrest of Georgia state Rep. Park Cannon, who was hauled away from protests outside of Kemp's signing ceremony for simply knocking on the doors separating her and the governor.

Georgia State Patrol spokesman Lt. W. Mark Riley confirmed that Cannon had been detained and charged after she had been "advised that she was disturbing what was going on inside and if she did not stop, she would be placed under arrest."

"I am not the first Georgian to be arrested for fighting voter suppression," Cannon later tweeted after she was released from jail. "I’d love to say I'm the last, but we know that isn't true."

So while Kemp and a cadre of fellow white men signed a bill that would disproportionately prevent voters of color from participating in the electoral process, while sitting under a painting celebrating his state's history of racism, a Black lawmaker was arrested just feet away for having the audacity to knock on his door. That should tell you all you need to know.

More like this
Texas Democrats are literally leaving the state to protest a GOP-backed voter suppression bill
By Rafi Schwartz
A state-by-state list of racist Confederate monuments that have been removed so far
By Vanessa Taylor
The U.N.'s human rights chief just called for reparations on a global scale
By Vanessa Taylor
Stay up to date