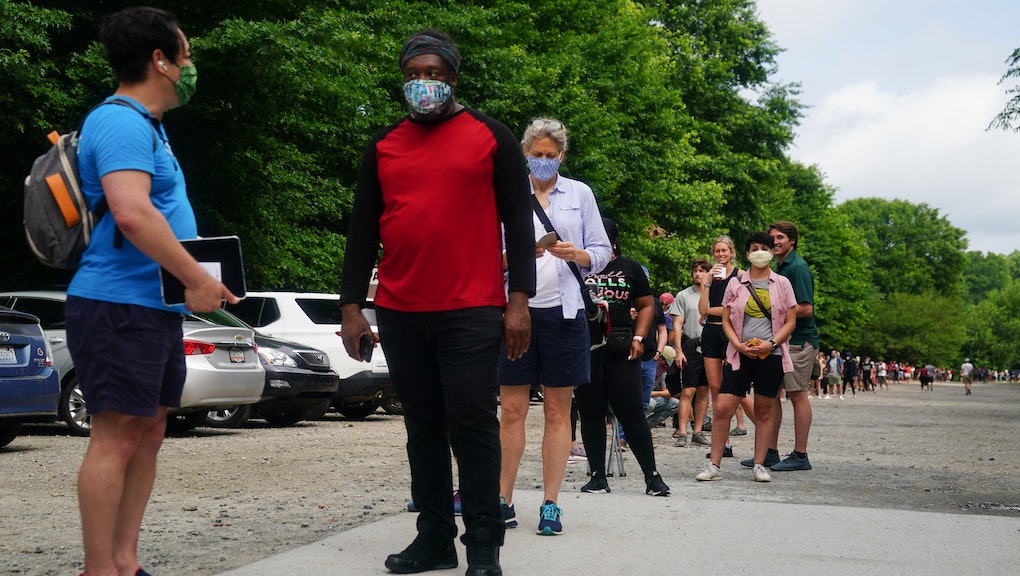 Malfunctioning machines, poorly trained poll workers, and long lines — these are just some of the hurdles voters navigated Tuesday as they hit the polls to cast their ballots in Georgia's primary. The election was postponed from its earlier date to allow officials more time to prepare after coronavirus shocked the U.S., though it's apparent that even with the added time some folks' vote may go unheard.

The problems started first thing in the morning, per the Atlanta Journal-Constitution, at 7 a.m. when polls were scheduled to open. Many people waiting in line to vote had requested absentee ballots but never received them. Then, just an hour into election day, voters reported difficulties using the new voting machines that cost the state $104 million.

Additionally, many precincts opened late, according to Fair Fight Action, the voting rights organization started by 2018 Georgia gubernatorial candidate Stacey Abrams. Abrams faced Georgia Gov. Brian Kemp (R) — who at the time was serving as Georgia's secretary of state and thus its chief election officer — and narrowly lost in an election that was marred by voter suppression efforts, including purged voter rolls, faulty machines, and extremely long lines.

Those precincts that did eventually open behind schedule also reported difficulties with the new machines, which were supposed to make voting easier and more secure with their hybrid model: A voter uses a touch screen to cast their ballot, and then the machine generates a paper version as a backup.

But in the days leading up to the election, officials scrambled to hire new poll workers, as many of their usual volunteers had quit because of the risk of contracting coronavirus. The poll workers who were hired last minute weren't trained properly, according to the Atlanta Journal-Constitution. The paper reported for example that many poll workers loaded the voter ID cards into the machines upside down.

Georgia officials seem to be passing the buck when it comes to taking responsibility for the voting mess. Gabriel Sterling, the Statewide Voting Implementation Manager, told the Atlanta Journal-Constition that it wasn't his fault because the machines weren't malfunctioning, people just didn't know how to use them. "So far we have no reports of any actual equipment issues," he said. "We have reports of poll workers not understanding setup or how to operate voting equipment. While these are unfortunate, they are not issues of the equipment but a function of counties engaging in poor planning, limited [training], and failures of leadership."

Meanwhile, at least one precinct reported that just after an hour of voting all of its election machines were non-functional. William Boddie, a Democratic state representative, said that Fulton County — home to Atlanta — was in a "complete meltdown."

With machines not working, many voters were instructed to vote with provisional ballots. But these ballots are often counted last and are subject to getting thrown out based on technicalities. Provisional ballots are often reserved for those who aren't sure if they're eligible to vote, not for use as a last resort because the polling location isn't functional. Other voters, discouraged by the long lines, decided to leave and return home, which Atlanta Mayor Keisha Lance Bottoms (D) discouraged them from doing. Long voting lines tend to disproportionately impact lower-income voters who may not have the schedule flexibility to stand in line for hours.

But even with provisional ballots made available to some voters, other precincts had run out of even that resource before the morning was over, leaving polling locations with essentially no backup plan for the widespread malfunctioning machines. Meanwhile, over 1.2 million voters cast their ballots by mail, which overwhelmed local boards of elections because typically only about 40,000 Georgia residents vote by mail.

Voting won't end for many more hours, and officials are fighting to keep polling locations open later so that people can cast their votes. And even when the polls do close, those waiting in line are still eligible to cast a ballot.

In the meantime, Tuesday's events have officials concerned and outraged. Georgia Secretary of State Brad Raffensperger has called for an investigation into Tuesday's elections to "determine what these counties need to do to resolve these issues before November's election." After all, hours-long lines, malfunctioning machines, and under-resourced polling locations are a far cry from a fair and free election. As DeKalb Commissioner Mereda Davis Johnson told the Atlanta Journal-Constitution: "If this is a preview of November, then we're in trouble."

More like this
Caitlyn Jenner's campaign is off to a great start!
By Rafi Schwartz
Texts from Matt Gaetz's "wingman" allege that the congressman paid for sex with a 17-year-old
By Rafi Schwartz
This very bad Florida voting bill furthers the GOP push to disenfranchise voters
By Vanessa Taylor
Stay up to date