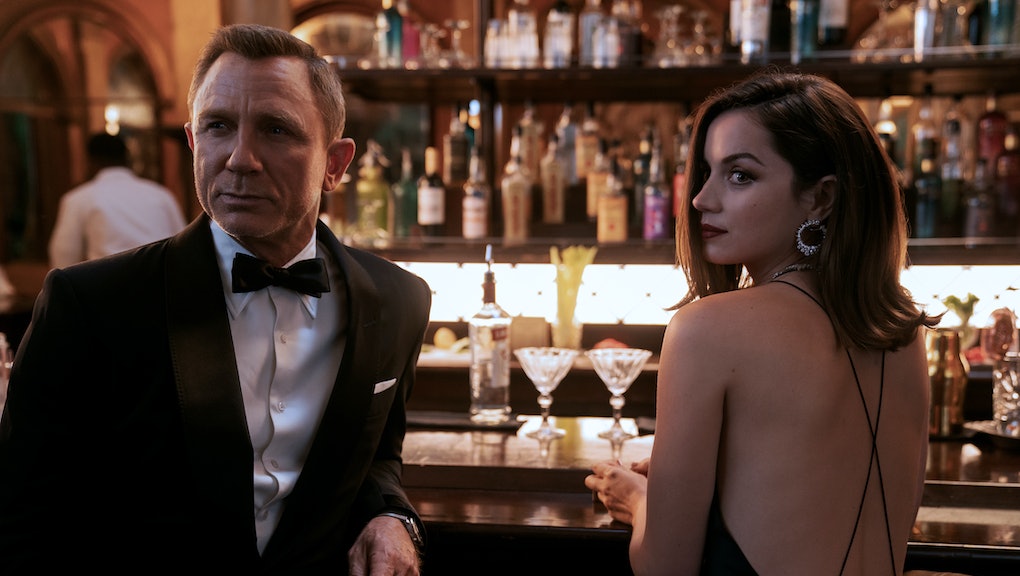 Daniel Craig and Ana de Armas in 'No Time To Die.' © MGM

Going to the movies is cancelled for how long?

Remember how No Time To Die was supposed to premiere last April? The 25th James Bond flick was the first major movie delayed by the coronavirus pandemic, just six months ago — though it feels like a century has passed. We thought we’d finally get to see Daniel Craig’s last outing as 007 this November. But then last week, MGM/Universal bumped No Time To Die to next spring, since hopes for a huge moviegoing resurgence in America this fall have basically been dashed.

As Craig explained to Jimmy Fallon on Monday, “We want to release the movie at the same time all around the world and this isn't the right time. So fingers crossed April 2 is going to be our date." Yikes, Mr. Bond doesn’t sound too confident about his movie’s new timeline, and it’s all because the film biz in America is on a way different trajectory than the rest of the world.

You see, everybody thought Tenet could be the savior of the cineplex in late summer. And while it’s done pretty well overseas, making $300 million in global revenue, the Christopher Nolan tentpole has been a dud here in the states, only recently eking to $45 million in ticket sales. Last weekend, Hocus Pocus from 1993 almost pulled in more money at the domestic box office.

But with only about 57% of movie theaters in America open at this point (and none in the major markets of New York City and Los Angeles), studios are realizing it’s freaking hard to turn a profit on big-budget films at this point. Thus, No Time To Die is pinning its hopes on things getting back to normal by April. Warner Brothers also reshuffled its lineup for the next two years this week, and while Wonder Woman 1984 is still optimistically slated for this December, Dune was pushed to a year from now, which bumped The Batman to March 2022.

What this all means for us, the audience members, is that we’re doomed to spend much more time during the pandemic just… waiting. But since it’s hard to maintain enthusiasm for movies that are forever “coming soon,” I’ve kind of given up on consciously looking forward to these films that might possibly debut someday. It heralds a new and pretty grim phase of the pandemic for me as a cultural consumer: six months or a year without IRL movies and concerts was a big bummer. But as the pandemic stretches into the winter and beyond, their absence is feeling more permanent.

The bigger problem is that putting everything on ice just makes it more likely that filmmakers will have nowhere to show their movies when they eventually release them. “If the studios continue postponing all their releases, the movie theaters aren’t going to be there for those postponed releases,” John Fithian, chief executive of the National Association of Theatre Owners, told The New York Times. For instance, Regal Cinemas, the second largest theater chain in the U.S., announced this week it’s temporarily shutting down again amid the dearth of new content.

“[Studios] have to consider whether they want the long-term viability of the theater platform to be available to them. And I think they do since about 80 percent of the movies that were scheduled during our closed period have been postponed for future theatrical release and not taken to the home,” Fithian noted. On behalf of people who love going to the movies (when it’s safe), I agree. And lots of cinema owners have been calling on politicians to bail out the beleaguered movie theater business. But with Congress unable to pass a second coronavirus stimulus bill to help American citizens, it seems awfully likely theater owners will have to look out for themselves.

More like this
In 'Roadrunner,' Anthony Bourdain shows us the beauty of the mundane
By John Saward
Black Widow shows Hollywood can handle a dark female superhero (finally)
By Chloe Stillwell
The Olympics' 13-year-old skateboarding medalists are cooler than I'll ever be
By Kara Weisenstein
Stay up to date