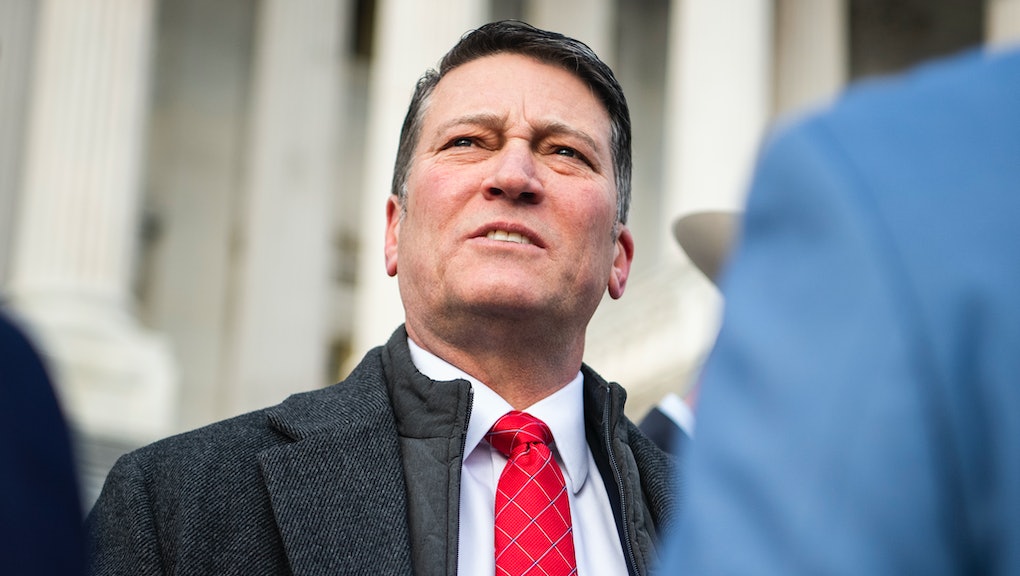 First term Congressman Ronny Jackson's road to the House of Representatives has been, shall we say, a strange one. A longtime member of the White House medical unit, Jackson eventually worked his way up to becoming the primary physician for both Presidents Barack Obama, and Donald Trump, the later of whom eventually nominated Jackson to become his Secretary of Veterans Affairs. Jackson eventually withdrew his nomination, after being accused of wildly inappropriate behavior, and generally embarrassing himself by staking his public credibility on Trump's "very sharp" intellect.

So where does one go after they miss their shot at cabinet-level position? To congress, of course — which is where Jackson now sits, representing Texas' 13th congressional district. And in his short time in office, Jackson has already settled nicely into his new role as a reactionary right-wing crank and conspiracy theorist. To date, he has sponsored exactly six pieces of legislation, three of which pertain to the military, one of which is about covering losses from natural disasters, another of which criticizes companies from working with the Chinese military, and one that blames "decades of policies rooted in socialism" for stifling domestic pharmaceutical production.

This may seem like a pretty thin record to run for reelection on, but Jackson doesn't seem worried. You see, speaking at the Faith and Freedom Coalition conference on Friday, Jackson accidentally gave away the game when it comes to GOP efforts to retake the House in 2022; it's not about compelling legislation, or appealing to voters, or doing anything to make people's lives better. No, as Jackson explained, it's a matter of sheer, craven, electoral manipulation.

"We have redistricting coming up and the Republicans control most of that process in most of the states around the country," Jackson explained to the crowd. "That alone should get us the majority back."

It's hardly a secret that GOP manipulation of voting districts has been a core tactic of Republicans seeking to maintain their political power at the expense of accurately representing the populations for whom they ostensibly serve. Nor is it much of a secret that GOP gerrymandering is a fundamentally racist enterprize that dilutes the political clout of marginalized communities. But Jackson's giddy assessment that Republican redistricting "alone" should be enough to win back the house is a rare moment of political honesty, in which a largely unspoken truth is given not only given voice, but celebrated.

What Jackson is essentially saying here is that congressional Republicans don't have to worry about actually delivering for their constituents. All they need to do is trust the in the GOP's ability to game the electoral system in its favor, and that should be enough.

Whether Jackson actually intended to give away the game, or was simply accidentally honest remains to be seen. But the chilling truth of the matter is that either way, there's a very good chance that he might be right.

More like this
Republicans are in an excellent position to weasel their way back to House control
By AJ Dellinger
What Madison Cawthorn packs for his flight: Heat
By Rafi Schwartz
More than 200 GOP lawmakers asked the Supreme Court to overturn Roe v. Wade
By Rafi Schwartz
Stay up to date