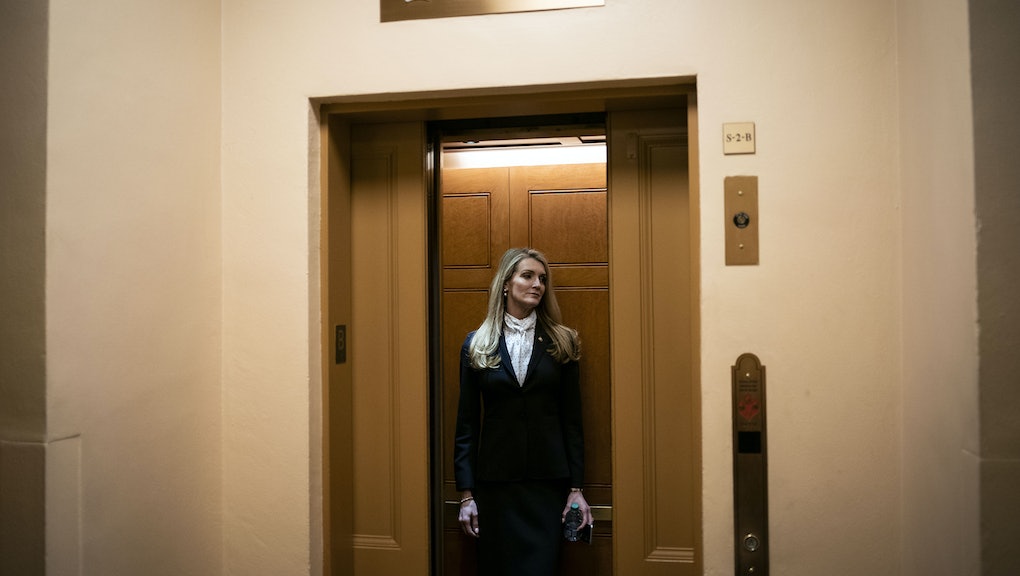 Late last month, after reports indicated that Georgia Republican Sen. Kelly Loeffler had sold off a trove of stocks ahead of the historic financial implosion caused by the coronavirus pandemic, Loeffler defended herself against allegations that she'd used her insider knowledge as a U.S. senator to profit from the coming economic collapse, while underplaying the virus's danger to the general public.

"This is a ridiculous and baseless attack," Loeffler tweeted. "I do not make investment decisions for my portfolio. Investment decisions are made by multiple third-party advisers without my or my husband's knowledge or involvement."

But now, according to newly filed financial disclosure documents obtained by the Atlanta Journal-Constitution, Leoffler's suspicious-seeming stock transactions are potentially even more troubling than they were at first glance. Because not only did she invest in a company that specializes in remote-work software just before the country was rocked with multiple statewide orders to shelter in place, causing employees around the country to begin working from home, but per the AJC's report, she also allegedly sold off stock in retail stores like Lululemon and T.J. Maxx while investing in chemical firm DuPont, a company that "is a major supplier of desperately needed personal protective gear," like face masks and other essential equipment for health officials, the paper noted.

Mic reached out to Loeffler's office for comment on the new disclosures but did not receive an immediate response. In the meantime, however, the senator's spokeswoman defended Loeffler to the AJC.

"Sen. Loeffler came to Washington on a promise to be a different kind of elected official,” spokeswoman Kerry Rom told the paper. “She holds herself to high standards of ethics and transparency, including acting in accordance with both the letter and spirit of the law, which she has done at every step of her time in the Senate and in her lengthy career in financial services."

The paper also reported that Loeffler and her husband were involved in "$18.7 million in sales of Intercontinental Exchange stock in three separate deals dated Feb. 26 and March 11."

As it happens, Loeffler's husband Jeffrey Sprecher is the CEO of that company which, incidentally, owns the New York Stock Exchange.

None of the reports so far indicate for certain that Loeffler broke the law. But for a multi-millionaire political appointee whose vast personal finances are key to her upcoming election campaign, the facts sure look fishy.

Indeed, fishiness is the name of the game when it comes to the widely reported spate of suspicious stock sell-offs from Loeffler and her fellow GOP senator, Richard Burr of North Carolina. So much so, in fact, that the Justice Department has reportedly begun looking into Burr's mixed messaging just ahead of the coronavirus-related stock market crash. While Burr was publicly downplaying coronavirus's danger and emphasizing America's preparedness, in private the senator was allegedly warning of tough times ahead to wealthy constituents — all while selling off stock at the same time he was receiving classified briefings on the virus's potential global impact.

Burr has denied any wrongdoing, insisting his stock sales were based solely on publicly available information. "The law is clear that any American — including a senator — may participate in the stock market based on public information, as Sen. Burr did," Burr's lawyer, Alice Fisher, said in a statement to NPR. "Sen. Burr welcomes a thorough review of the facts in this matter, which will establish that his actions were appropriate."

Mic has reached out to Burr's office regarding the alleged questioning from Justice Department officials but did not receive a response before publication. We will update the story if either senator's office offers comment.

Meanwhile, both Burr and Loeffler have both resisted calls to step down following the revelations about their stock sales. Burr had previously announced that he would not be seeking re-election in 2022.