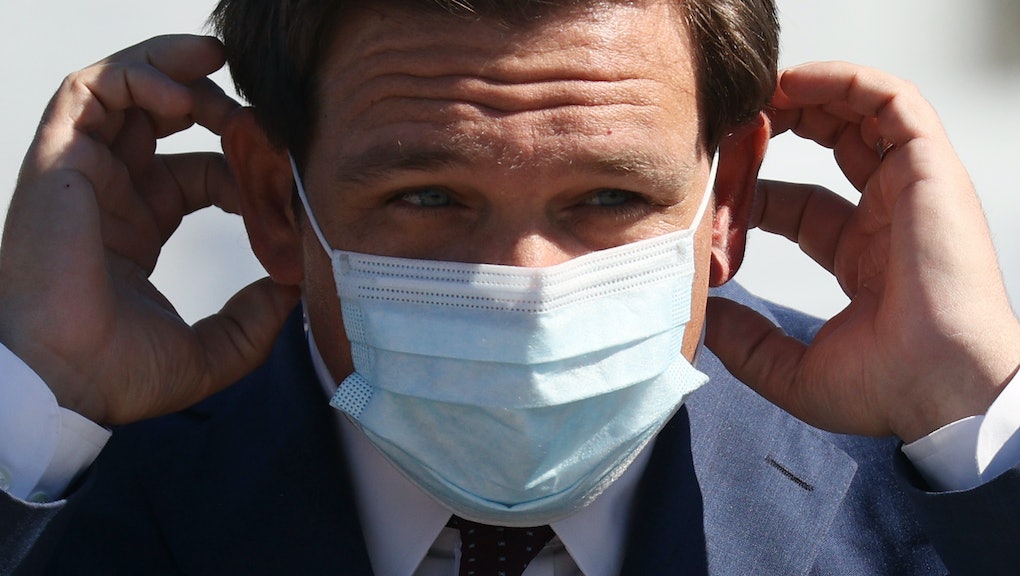 Throughout the past year, Florida has offered a case study in how not to handle a pandemic, from reportedly manipulating medical data to opting for an overwhelmingly lax response in the face of looming COVID-19 threats and surging case numbers. For a time, Florida was even one of the world's coronavirus epicenters — despite the fact that Republican Governor Ron DeSantis had already declared victory over a disease that has now killed 30,000 of the nearly 2 million people infected statewide.

Now, with vaccine rollout underway and a theoretical light at the end of the tunnel vaguely in sight, DeSantis must manage a new COVID crisis: charges from two top Democrats that the governor has been prioritizing vaccine distribution for political allies and wealthy residents while leaving communities most in-need behind.

On Monday, Florida State Agriculture Commissioner Nikki Fried, sent a letter calling on the U.S. House of Representatives to investigate DeSantis's "inept distribution of vaccines at best, and corrupt political patronage at worst," Yahoo News reported. In the letter, viewed by Yahoo, Fried wrote that DeSantis established "pop up" vaccination spots "in wealthy communities affiliated with donors to the governor's political campaigns."

Fried, Florida's only Democrat elected to statewide office, is the second Democratic official to call for a federal investigation on the matter. In late February, Democratic Congressman Charlie Crist urged the Department of Justice to investigate the connection between DeSantis' vaccine distribution and his donor class. Citing a pop-up in the wealthy, private Lakewood Ranch community — which is owned by a prominent Republican donor who has contributed nearly a million dollars to DeSantis — Crist note that "the ZIP codes in question have the highest income levels and lowest COVID infection rates in the county."

Speaking with Yahoo News, Fried offered a similar critique. The state's vaccine distribution has "been inequitable, with Black and Hispanic residents left behind," she said, later adding, “The message is clear. If Ron DeSantis likes you, or if you give his campaign money, you can cut in line ahead of seniors, teachers, and essential workers. It’s despicable and it needs to stop."

DeSantis' office denied the allegations, with a representative telling Yahoo that "the insinuation that politics play into vaccine distribution in Florida is baseless and ridiculous."

Nevertheless, it's not just Democrats who have accused DeSantis of uneven vaccine distribution. In early January, Carlos Hernandez, the Republican mayor of Hialeah, Fla., claimed he'd been shut out of the vaccine distribution process. "There’s been arguments that Hialeah has not received these vaccines because there’s a problem with me and the governor," Hernandez said, according to CBS News. "I don’t have a problem with the governor. How can I have a problem with a person I have not seen since the beginning of the coronavirus issue. A person that’s been disappearing from this community?"

"We are the 5th largest city in the state of Florida and the one most affected," Hernandez added at the time. "We have no communication and no help whatsoever from the Governor or his office." DeSantis denied those accusations as well.

But while DeSantis may deny these charges, they certainly track with the GOP's history of prioritizing white, wealthy people while leaving communities most in-need behind — including throughout the COVID-19 pandemic.

More like this
New York will finally offer vaccines to all inmates, after a judge's order
By Vanessa Taylor
New York has set aside a massive, first-of-its-kind fund for undocumented workers
By Rafi Schwartz
Jailhouse lawyer Johnnie Cook is fighting for pandemic justice
By Mai Tran
Stay up to date