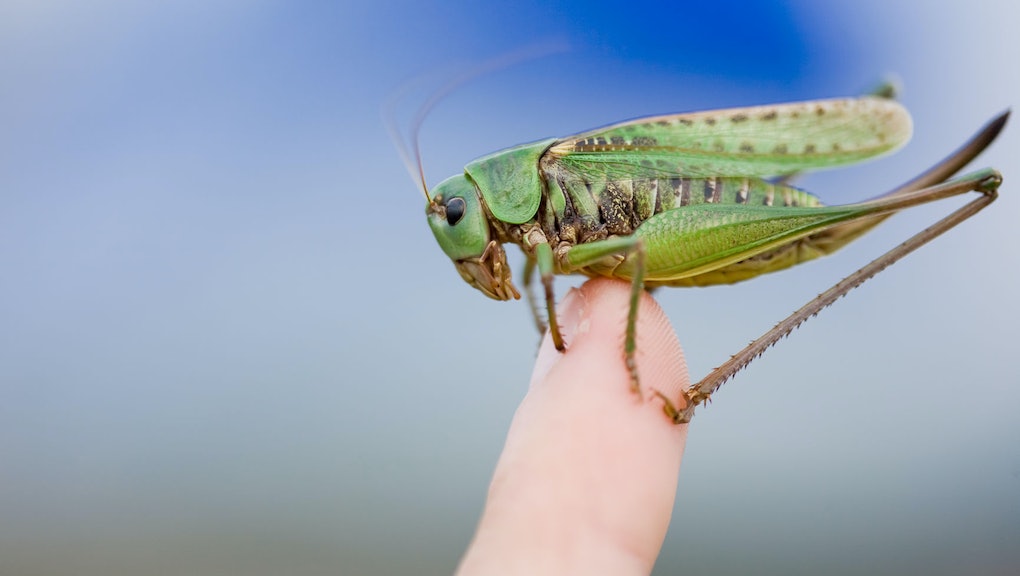 Swarms of people flock to Las Vegas for its casinos, concerts, clubbing, and its promised debauchery. A creepier, crawlier swarm, however, recently decided to join their ranks. Over the past few days, flurries of grasshoppers have invaded Vegas and elsewhere in southern Nevada. Experts blame the phenomenon on a perfect storm of unusually wet weather, bright lights, and other factors.

Videos posted on social media and news outlets show the insects swirling around lampposts, coating doors, and littering sidewalks in what some have dubbed the “Great Grasshopper Invasion of 2019,” according to CBS News. In fact, CNN reports that their numbers are so large, they even appear on the National Weather Service’s radar.

The six-legged squatters are known as pallid-winged grasshoppers, “a very common desert species,” Jeff Knight, an entomologist at the Nevada Department of Agriculture, said at a press conference on July 25. While the Vegas infestation may seem vaguely apocalyptic, he reassured reporters that the grasshoppers, which typically eat weeds, are mainly just a nuisance. They don’t sting, bite, or carry diseases. “For the most part I don't think we'll see any real heavy damage,” Knight said. “They don't eat our wood or anything like that.”

When the region experiences a wet winter or spring, pallid-winged grasshoppers “build up” from below Laughlin in southern Nevada and even further south, in Arizona, he explained. They then migrate as far north as central Nevada. Knight said he has noticed more pallid-wing grasshoppers this year than last year. “It’s most likely the wet spring and winter this year,” he said. Indeed, Sin City surpassed its annual average of about 4.2 inches of rain early in the year when a thunderstorm on May 9 brought the rainfall total to more than 4.5 inches, the Associated Press reported.

But Knight pointed out that this year’s swarm, though decidedly large, isn’t all that unusual, citing the existence of state records of such events dating back to the early 1960s. He also noted that he has seen hordes as big or bigger than the current one a handful of times in his career, and estimated that last one of this magnitude occurred about six or seven years ago.

Wind patterns and ultraviolet light, which attract grasshoppers and other insects, may explain why the swarms have been drawn to the Strip in particular, he said. The pyramidal Luxor Hotel, which shines a beam of light into the sky — the Sky Beam — long a hot spot for moths, has also become popular among pallid-winged grasshoppers as of late, the New York Times reports.

Sin City’s greenery may have also proved irresistible to the grasshoppers, which, again, feed primarily on vegetation. During the desert’s especially dry summer months, they migrate in search of food, Jeff Lockwood, a professor of natural sciences and humanities at the University of Wyoming, told the New York Times. “By golly, the city of Las Vegas is just filled with patches of green,” he said. “What might be the magnet is in fact the green plants, as much as the lights at night.”

Trying to schedule your next Vegas trip around the grasshoppers? Knight said that this particular species hatches in the fall and reaches maturity around this time of year. "At this point, the population will start dying off,” he said. “Normally, they’d be gone in August.” If you find yourself in Vegas before the swarm disperses, stay calm, Knight advises. If one flies into your car, cab, or rideshare, roll down the windows and let it out. In other words, no need to let these spindly party-crashers ruin your plans.

More like this
What are neopronouns and how do they honor identity?
By Tracey Anne Duncan
The CDC just announced the mask era is coming to an end (sort of)
By Rafi Schwartz
Jamal Jordan's 'Queer Love in Color' is the expression of joy my inner child needs
By Joseph Lamour
Stay up to date