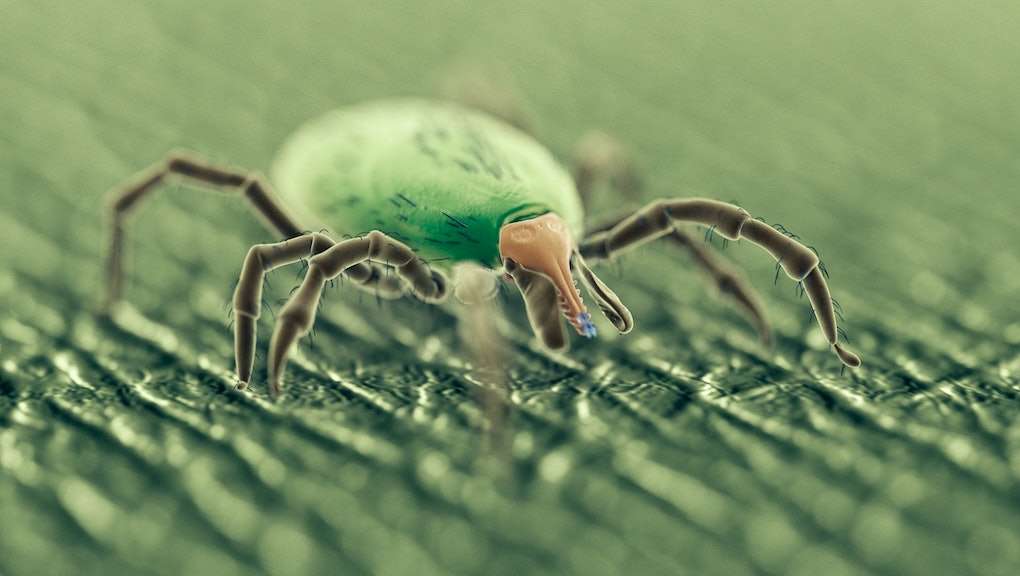 New research has found that ticks are over twice as likely to latch onto humans when temperatures get warmer. The study, presented on Monday to the American Society of Tropical Medicine and Hygiene, warns that this means we could see an increase in tick-borne diseases as climate change continues to warm the Earth.

Scientists in the study focused on observing brown dog ticks, which are well known for carrying Rocky Mountain Spotted Fever (RMSF). These ticks usually feed from dogs, but can sometimes end up on humans as well. Antibiotics can treat the disease if someone catches it within the first week, but if left untreated it can be fatal.

Previous research on brown dog ticks have suggested these little guys get more aggressive toward humans in hotter weather. With the climate crisis on everyone's minds, the lead author, Dr. Laura Backus, decided to conduct an experiment to find out if the warming climate could change the ticks' behavior.

The experiment involved testing the ticks' sense of smell. The setup was pretty simple: get two wooden boxes, put a human in one and a dog in the other, then set up a tube between the two. Put mesh barriers in the tube to keep the volunteers safe. Then, unleash the ticks in the center of the tube.

This experiment could've only worked with brown dog ticks because these little suckers actually seek out and hunt for blood rather than wait for prey to pass by. They can literally wait inside houses and zoom to their target when they find one.

So scientists brought out two types of brown dog ticks: ones that lived in hotter climates like Arizona, and others that lived in temperate climates throughout the rest of the U.S. After they were dumped in the center of the tube, the researchers observed which prey the ticks hunted as the room's temperature was adjusted.

The hotter climate ticks aggressively went for humans once the heat went past room temperature.

"We found that when temperatures rose from about 74 to 100 degrees Fahrenheit, brown dog ticks that carry the disease were 2.5 times more likely to prefer humans over dogs," Dr. Backus stated in a press release.

The temperate climate ticks weren't as aggressive, but Dr. Backus and her team noticed their interest in dogs also decreased in hotter weather. There were also still a small, but statistically insignificant, number of ticks that gravitated towards humans. She believes this, and the behavior of the hot-climate ticks, could indicate that temperate weather ticks could begin shifting to humans as temperatures rise as well.

Overall, it means that "when the weather gets hot, we should be much more vigilant for infections of RMSF in humans," Dr. Backus concludes.

While the team doesn't understand why the ticks would pick humans when it's hotter, the conclusions drawn from the study appear sound to other researchers after review. And the results should be well-noted given the rising rate of tick-related illnesses. If heat can make the rate of infections worse, then climate change means humans will continue to grapple with more pandemic-like outbreaks thanks to these pests.

"If we can identify the situations, the environmental factors, that lead to humans getting bitten more often, we can then hopefully be able to identify and intervene faster and reduce cases," Dr. Backus told Live Science. Tackling the climate crisis will also be critical if we want to start preventing these changes rather than struggling to react to them.