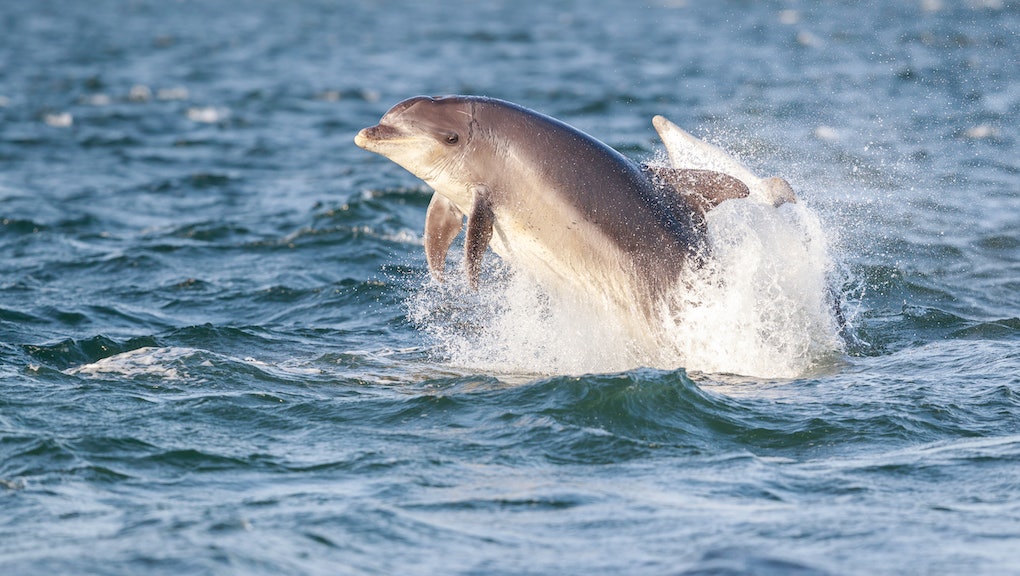 As we continue to pump a seemingly endless stream of greenhouse gases into our atmosphere, warming the planet and causing devastating extreme weather events, it feels increasingly like our habitat is poisoning us. A similar dark and unfortunate fate is happening to dolphins, and climate change is likely responsible. According to research published this month in the journal Scientific Reports, coastal dolphin populations in the US, South America, and Australia are suffering from a "freshwater skin disease" that causes painful skin lesions and ulcers that slowly kill them.

The disease, which researchers identified as a "distinct ulcerative dermatitis," affects dolphins who have been exposed to freshwater for an extended period of time. Over time the dermatitis can cover as much as 70 percent of a dolphin's body. Scientists who discovered the skin condition likened the severity to that of a third-degree burn. That affected skin is often colonized by fungus, bacteria, and algae, which cause further discomfort through infection and discoloration. “Their skin is just as sensitive as ours, and possibly even more so. It would be incredibly painful,” Dr. Nahiid Stephens, a veterinary pathologist at Murdoch University and co-author of the research paper, told The Guardian.

Typically, dolphins and other sea creatures are capable of surviving short stints of exposure to freshwater, whether it’s passing through a waterway or swimming in an area experiencing heavy rainfall. Long term exposure has been known to cause dermatitis in dolphins, but this particular, incredibly painful variant has become more common in recent years. It was first identified in 2005 in a group of bottlenose dolphins that got trapped in a Louisiana lake after Hurricane Katrina hit, but has since been spotted with growing frequency.

Researchers linked the recurrence of the disease to the growing number of extreme weather events that have happened in recent years. According to researchers, the lesions seem to pop up after extended and potentially unexpected exposure to freshwater. In Australia, two communities of dolphins experienced the skin disease following periods of heavy and unseasonal rainfall, once in 2007 and again in 2009. In both cases, dolphins died as a result of dermatitis.

Dolphins that experience freshwater skin disease are often racked with physical pain and physiological stress. But simply avoiding the cause of the disease is impractical for the creatures. Exposure to freshwater is at times unavoidable, and dolphins don't go out of their way to dodge it because, according to researchers, they are not yet attuned to the fact that the water can hurt them. “It’s like humans – we know we need to breathe oxygen but if you were enclosed in a house that was slowly filling up with noxious gas, it would only be once it reached a crisis point that you would probably be aware of it,” Dr. Stephens told The Guardian.